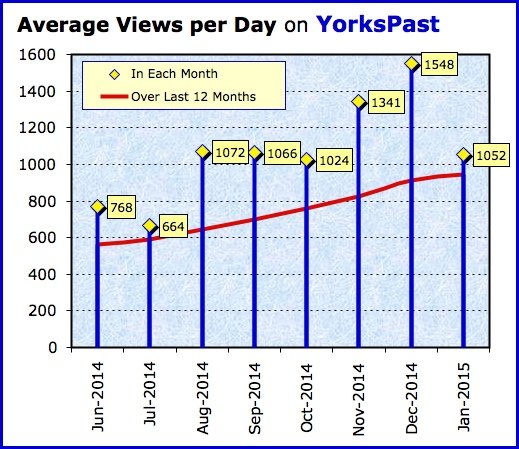 Three of January’s top posts are related to my next OLLI Lifelong Learning classes at Penn State York. The Spring 2015 OLLI Course Catalog is at this link.

OLLI is an all volunteer-driven organization that has provided a variety of educational and social activities since 2008; check out page 3 of their catalog for more details. My Spring 2015 two-part presentation will be on April 22 and April 29, 2015. For full details and registration, check out pages 15 and 27 of the Spring 2015 OLLI Course Catalog.

I will be counting down the Top 50 York County Factories in 1899. Even though I’m limiting myself to a 3-minute overview on each company, I’ve selected some cream-of-the-crop, neat morsels to highlight each company. This two-part presentation should make for some fun classes.

At the beginning of every month, I’m sharing with my readers the top 10 posts from the previous month. These are your favorites during January 2015:

The distinctive brick mill building at 3780 East Market Street, just west of the Ettline Victorian House, had its beginnings as a mill warehouse. The Hauser Mill Warehouse was purposefully situated adjacent to the busy road and railroad; it was used as a general warehouse and serviced the Hauser Grist Mill, located back a lane at this location. Later in its life it became the Mill for Kreutz Creek Valley Farmer’s Co-Operative Association.

I share with my readers the top 10 posts from the previous month. These were your favorites during December 2014.

I heard from Bob Landis, after writing York is In Danger of Losing the Susquehanna Trail during 1923. During a visit to the Lincoln Museum in Illinois, he heard that Congress tried to route the Lincoln Highway through Washington, D.C. Bob surmised, “If true; York might have also been in danger of losing the Lincoln Highway.” In this post, I confirmed Bob’s suspicions via an April 14th 1914 article in the York Daily.

Paul Vaughn submitted an illustration of the chassis for the 1914 Pullman Model 6-48 Automobile. Over 23,300 Pullman Automobiles were produced in York, Pennsylvania, between 1903 and 1917. Also, discover the location of The Coliseum in York; where York’s first Auto Show was held.

The York Card & Paper Company was the oldest and largest Wall Paper manufacturer in York County. Many will remember The York Card & Paper Company site, on the corner of Carlisle and Linden Avenues, as the longtime location of the Ammon R. Smith Chevrolet dealership. After Ammon R. Smith closed, York Wallcoverings purchased the former York Card and Paper Company building and connected it with the neighboring York Wall Paper building. Thus those long-ago wallpaper competitors were symbolically physically joined, as of 1990.

Two years ago, I decided to use YorksPast to force me to finally start my novel, centered upon York’s railcar builders Billmeyer & Small. I’m on a weekly schedule of researching and writing an installment of the novel that appears every Thursday in YorksPast. In Chapter 21, three weddings occur; the last is the Billmeyer House wedding of J. E. Baker and Mary Billmeyer.