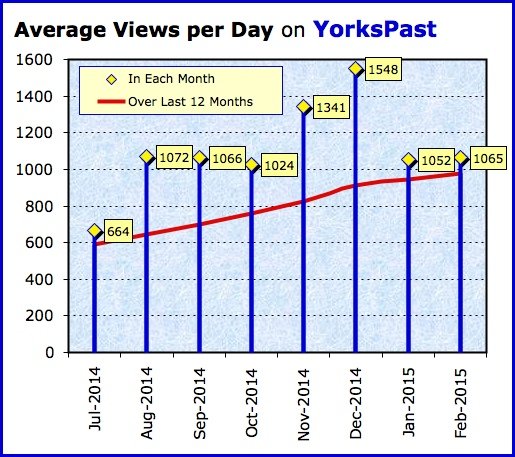 During the past month, I’ve heard from many family historians. All were very appreciative of my post where I explored why York’s addresses changed. Thanks for all of your comments and suggestions for future posts! I hope to see many of you during my April presentation at the Lancaster Family History Conference.

City Directories are excellent sources to discover where your ancestors lived, or where a business was located in the City of York. Using these directories, I’ve seen family histories, where people write, “my grandparents moved down the street in 1899.” However it is easy to get misled, because in some cases they did not move, instead the street address number changed for the same building. In my #1 post for February, I explored why, when and how street addresses changed in York.

At the beginning of every month, I’m sharing with my readers the top 10 posts from the previous month. These are your favorites during February 2015:

This post explores why, when and how street address changes were made in York. The adjustment was not easy for Yorkers; it took almost 20 years for the acceptance of these changes.

Three of January’s top posts are related to my next OLLI Lifelong Learning classes at Penn State York. At the beginning of every month, I share with my readers the top 10 posts from the previous month. These are your favorites during January 2015.

I heard from Bob Landis, after writing York is In Danger of Losing the Susquehanna Trail during 1923. During a visit to the Lincoln Museum in Illinois, he heard that Congress tried to route the Lincoln Highway through Washington, D.C. Bob surmised, “If true; York might have also been in danger of losing the Lincoln Highway.” In this post, I confirmed Bob’s suspicions via an April 14th 1914 article in the York Daily.

#7 York Rolling Mill in Spring Garden Township; site of a Massive Explosion in 1908

The York Rolling Mill was established in Spring Garden Township three years after the end of the Civil War. By 1899, it had grown to become the seventh largest factory employer in all of York County. After a massive explosion on August 10, 1908, all useable equipment from the site was moved to a Susquehanna Iron & Steel Company mill in Columbia. The remains of the damaged York Rolling Mill building were demolished and the factory was never rebuilt.

Cliff Satterthwaite provided a plein-air pencil drawing and artwork of a York County one-room schoolhouse. It was drawn about 1971 and vandals burnt down this schoolhouse, about one year later. Cliff did not recall the exact name or location of this schoolhouse, so I asked my readers to help in the identification. Readers have responded; watch for an update this coming Friday.

The York Carriage Company was established during 1889, at 158-160 North George Street in York. That location is presently occupied by the Pullman Building; housing the Pullman Apartments at 238 North George Street. Don’t be misled by the different street numbers; between then and now, the street address numbers changed in York.

First Working Canal in Pennsylvania was in York Haven

On November 22, 1797, the Conewago Canal Company opened a canal to navigate the Conewago Falls on the Susquehanna River; it was the first working canal in Pennsylvania. Cliff Satterthwaite decorates this post with his mural depicting canal operations in York Haven during the 1840-1850s era.

Two years ago, I decided to use YorksPast to force me to finally start my novel, centered upon York’s railcar builders Billmeyer & Small. I’m on a weekly schedule of researching and writing an installment of the novel that appears every Thursday in YorksPast. In Chapter 22, as the level of railcar manufacturing is on a downward slope in York, George Billmeyer diversifies into other businesses while Billmeyer & Small branches out into building specialty railcars. Several rail fans in Maine were happy that my novel included the Billmeyer & Small venture into producing two-foot gauge passenger and combination coaches for Maine railroads in the 1890s.