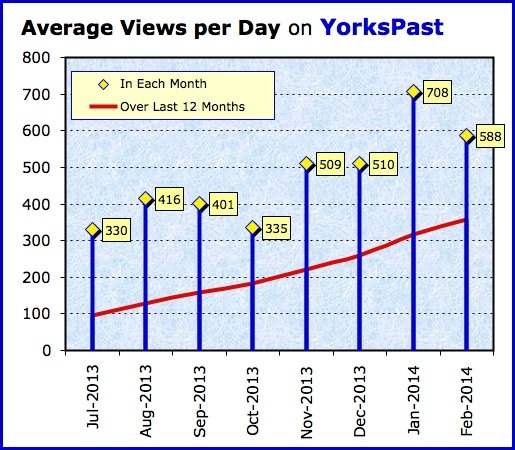 At the beginning of every month, I’ve decided to share with my readers the top 10 posts from the previous month.  These are your favorites during February 2014:

In 1995, everything was in place, to close three blocks of South George Street for several hours, for members of the 1994 U. S. Olympic Luge Team to give sliding demonstrations using wheeled luge sleds.

An issue of Popular Science, focusing on the science of the Olympics, noted “The U. S. Luge team’s secret weapon is its training facility, the York International Luge Training Complex in Lake Placid, New York.”

In the 1920s about 400 sycamore trees were planted along the Susquehanna Trail, from Jacobus southward to the Maryland Line, as a living memorial to the county’s World War I veterans; only about one-half of the trees remain.

Birdes Jacobs talked about using “a ladder to descend to the [turbine] wheel to clean our brush, leaves and many times eels.  It cut up the inside of the eel into sections ready for the frying pan but the hide of the eel was too tough.  Dried eel hide made unmatched belt lacers and was usually used to tie the flail to the staff for threshing rye, for the straw and to tie corn shocks and sheaves of corn fodder.  Sometimes the eels were so plentiful they would almost stop the wheel.”

Letters in the Attic, by Cassandra Small; Letter of June 30th, 1863

This second part of Letters in the Attic provides answers inserted between paragraphs of the letter Cassandra Small wrote to Lissie Latimer on June 30th, 1863.