Readers Choose Top 10 Posts during August 2015; Thanks for the Feedback 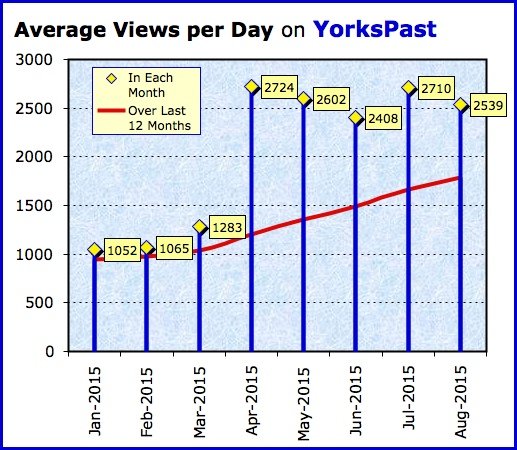 Reader Feedback was used to select the Top 10 Posts during August 2015. Thirteen of the fifteen August posts generated feedback from readers. Blog comments, e-mails, phone calls and conversations resulted in 67 total contacts that I responded to. Number 1 on the list (Where I’ll be Speaking & Topics Available) resulted in 11 contacts down to number 10 on the list (Cliff Satterthwaite captured early South Queen Street Auto Dealerships) resulted in 3 contacts.

At the beginning of every month, I’m sharing with my readers the top 10 posts from the previous month. These are your favorites during August 2015:

Where I’ll be Speaking & Topics Available

This post will continually be updated with the places I’ll be speaking and the current topics that are available. The current list of 9 talks has been expanding at about 2 new talks per year.  If you want a talk developed on a topic I’ve previously written about in this Blog, let me know by posting a comment at the bottom of this Blog page. Talks currently in the development stage for 2016 are: The Susquehanna Trail in York County and One-Room Schoolhouses of Springettsbury Township.

Famed twin barns still stood only 50-years ago on the northwest corner of Haines Road and Mt. Rose Avenue in Springettsbury Township. I always thought the architectural styling of these barns was charming. Cliff Satterthwaite definitely captures that charm in artwork he produced on site in 1962.

Forty-four graves within the Erb Burial Plot in Springettsbury Township were re-interred in two common graves within Mt. Rose Cemetery in Spring Garden Township. In 1964 it was permissible to do this to old family cemeteries. However after Pennsylvania passed the Historic Burial Places Preservation Act in 1994, moving such cemeteries is illegal. I’ve received numerous inquiries about what happened to the original gravestones? They were not transferred to Mt. Rose Cemetery.

On July 26th, 2015, I began my 4th year of YorksPast. The first three years of YorksPast, represent 653 posts; which averages 4.2 posts per week. Readership remains at record levels. Thanks to everyone for your continuing interest in the subjects I write about and thanks for the kind messages I received upon this occasion.

A giant oak tree stood at the curve in Freysville Road, located just north of where Old Orchard Road intersects Freysville Road. Cliff Satterthwaite showcases the grandeur of this majestic oak tree in a 1976 painting. The tree has since been lost to storms.

Answering Your Questions about Rezoning for a Shopping Center on Corner of East Market Street and Mt. Zion Road in Springettsbury Township

A shopping center is envisioned on the northeast corner of East Market Street and Mt. Zion Road in Springettsbury Township. It is the corner where three 19th Century homes and the iconic Modernaire Motel front the Lincoln Highway; i.e. East Market Street. Spring Lane LLC has proposed rezoning this corner in order to build a shopping center. I’ve received many questions related to this rezoning request over the past few months. For the benefit of all my readers, here are the questions that have been asked the most frequently and the answers that I provided.

Rev’d Dr. Neal Otto Hively has plotted all the earliest surveys, covering all of York and Adams Counties, to create connected property maps, for the earliest settlers. His books on original land records and accompanying connected draft warrant maps are based on his original research. The series of maps and books are fantastic references to anyone researching the early history of properties in York and Adams Counties. The York County Heritage Trust is a location that sells Hively’s maps and books.

Through the third grade, during the 1950s, my school bus stop was nearly across the street from the Square Deal Garage. In fact, the school bus at the right side of a 1950s photo could very well be the bus that took me to and from York Township Elementary School in Spry. A current photo of the garage is presented for a ‘Then and Now’ comparison. The Square Deal Garage still stands at 2181 South Queen Street in York Township.

The following two posts were in the Top 10 Posts based upon Page Views, however did not make the Top 10 based upon Reader Feedback:

July 1970 Airplane Photo of Hallam and The Hellam Hills

During July 1970, I took an aerial photo of the eastern end of Hallam, with the Hellam Hills in the background and beyond them is Lancaster County. My brother, Stanley, had just recently got his private pilots license and on several occasions, I took a ride with him and snapped a few photos. Reader Bill Lehman wanted to know how many hills make up the Hellam Hills. I could clearly identify six summits in my aerial photo. Check out this post to discover if that is the answer to Bill’s question.