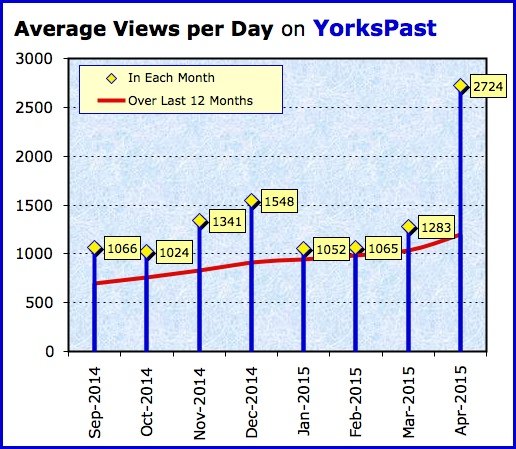 The past month was record breaking in the number of YorksPast readers. I enjoyed seeing many of you at the many talks and events during April. It was a hectic month for me, however these numbers are a nice reward. Thanks to all my loyal and new readers.

At the beginning of every month, I’m sharing with my readers the top 10 posts from the previous month. These are your favorites during April 2015:

The Northern Central Railway’s Special Schedule, for the Friday April 21, 1865, Lincoln Funeral Train from Baltimore to Harrisburg, lists schedule times for the Pilot Engine; with a footnote indicating the Funeral Train will follow 10-minutes after the Pilot Engine. After I gave a talk in Glen Rock, I got the comment “it would be nice to have a timeline of when the funeral train actually passed by all the Northern Central stations in York County.” Such a timeline is included in this post.

This post focuses on the locomotives that pulled the Lincoln Funeral Train; which used as many as 42 different locomotives to make the, over 1600 mile round-about route, funeral train journey from Washington, D.C. to President Lincoln’s burial site in Springfield, Illinois. This is my second “Classics from YorksPast,” where I’m re-issuing posts that were very popular back in the days when my readership was one-tenth of what it is today.

An obituary of Gardner Cobb appeared in The New York Times on April 7, 1908. The obituary was concise, while emphasizing a connection to Abraham Lincoln. “Gardner Cobb, one of the oldest railroad engineers in the country, died in Shamokin, Penn., last night. He ran President Lincoln’s funeral train a part of the way from Washington to Illinois.” The same day, The York Daily in York, PA, contained additional details in their obituary of Gardiner Cobb. “During the Civil War he was in charge of a number of ammunition and supply trains, and ran the locomotive which drew the funeral train of the martyred President Lincoln from Baltimore to Harrisburg.”

City ordinances forbid railroads to operate in downtown Baltimore. The resulting non-connecting railroads created a travel bottleneck through Baltimore. Most people know that the first shots of the Civil War occurred April 12, 1861, when Confederates fired on Fort Sumter in South Carolina. However the first casualties of the Civil War occurred in the streets of Baltimore a week later, on April 19, as a direct result of the Baltimore Bottleneck.

Readers Choose Top 10 Posts during March 2015; Thanks for all your Comments!

Your Top 10 favorite posts are summarized for March 2015; in what was a record breaking month in hearing from my readers. To follow that up with the April record-breaking month in YorksPast readership is very rewarding.

This 2013 post was re-issued as a “Classics from YorksPast,” which landed the number three spot on this Top 10. However this original 2013 post still pulled in enough readers to show up at number seven on the Top 10.

For this 600th YorksPast post, I decided to try something different. I launched “Classics from YorksPast,” where I’m re-issuing posts that were very popular back in the days when my readership was one-tenth of what it is today. The launch turned out quiet well; in fact this classic was also in the top ten during March 2015.

Several readers commented to my post York Mall; Remembering the Early Years.  York Mall was the first fully enclosed shopping mall in York County. It opened along East Market Street in Springettsbury Township on October 3, 1968. This post looks at some of those comments. The Funderland button, pictured here, was submitted by Alicia Helfrich.