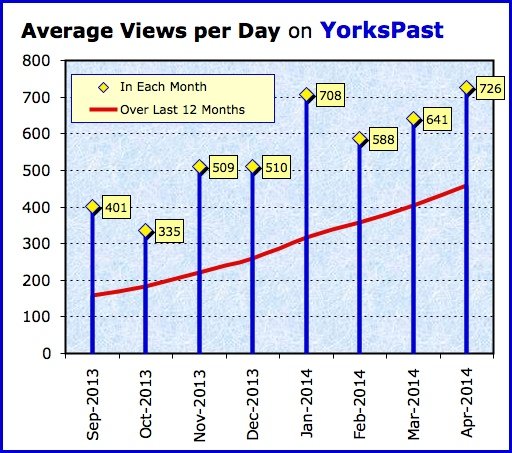 At the beginning of every month, I’m sharing with my readers the top 10 posts from the previous month.  Evidently you like the idea, since prior months top 10 lists remain popular.  These are your favorites during April 2014:

In early April, I shared this top 10 list; i.e. the posts with the most page views from my loyal readers, during March 2014.

In the early morning darkness of Saturday September 16th, 1876, three monster trains, containing 120 railroad cars, pulled into York, Pennsylvania.  Such was the beginning of an eventful day, as P. T. Barnum brought his three-ring circus to town.

The making of Shearer’s 1860 Map of York County

The story of how D. J. Lake surveyed Shearer’s 1860 Map of York County, PA, by pushing a wheelbarrow along every road in the county.

Photos showing the present Springetts Fire Company at 3013 East Market Street nearing completion in 1958 in addition to photos of the new Springettsbury Fire Station on Commons Drive, as it nears completion in 2014.

What do Fire House, Woozy Moose and Casablanca have in Common?

Learn why the Fire House Tavern, Woozy Moose Tavern and Casablanca have an 82-year-old Springettsbury Township fire station in common.

A 1912 newspaper article by Dr. Israel H. Betz of York, PA is likely what piqued Henry Ford’s interest in purchasing the Schultz House and moving it to Greenfield Village in Michigan.

Car Building in York County during 1876

An article in the October 10th, 1876 issue of The Evening Dispatch, paints an optimistic picture for car building companies within York County.

“In God We Trust” on coins has a Pennsylvania Connection

I wanted to know when “In God We Trust” was first used on coins and stamps.  In doing so I learned that ten days before the first “In God We Trust” postage stamp was issued, the words “under God” had been inserted into the Pledge of Allegiance.

In early March, I shared this top 10 list; i.e. the posts with the most page views from my loyal readers, during February 2014.