Readers Choose Top 10 Posts during May 2015; YorksPast Readership Continues at a High Level 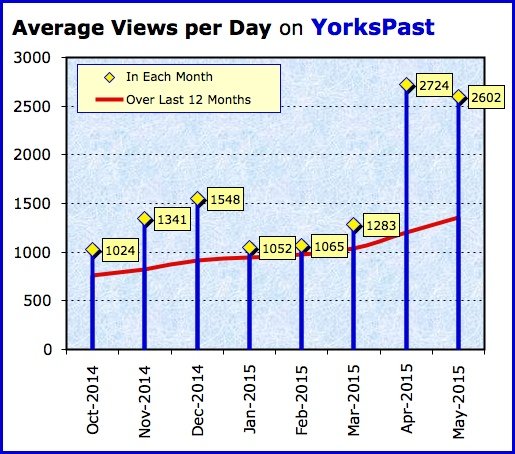 YorksPast readership continued at high level during May. Thanks to all my loyal readers.

At the beginning of every month, I’m sharing with my readers the top 10 posts from the previous month. These are your favorites during May 2015:

The newly opened 2.5-mile Springettsbury Township section of the Heritage Rail Trail County Park has become my favorite place to take a walk. The first time I walked this section, I saw an eagle catching food down by the creek, then flying into a tree; actually to the nest pictured. These urban eagles seem to tolerate all the noise coming from nearby Route 30.

On the Job at Black Bridge

Black Bridge carries trains over the Codorus Creek as railroad traffic moves between York and Emigsville. A photo of a Pennsylvania Railroad construction gang at Black Bridge was taken on July 5, 1934. It includes: Paul Smith, City Heckart, Harold Smith, Thed Jacobs, Paul Resh, Frank Zarfoss and several unidentified men. Harold L. Smith is my father and the photo was taken on the occasion of his first day on the job with the Pennsylvania Railroad.

Links to the top ten posts during April 2015 are provided for this record-breaking month of YorksPast readership.

These Places Matter in Springettsbury Township

The Colonial Revival House, “Bloomingdale”, at 3405 East Market Street has been on list of the most historically significant structures in Springettsbury Township ever since the first list was issued in 2001. It is one of the 19th Century properties now threatened by a proposed shopping center on the northeast corner of East Market Street and Mt. Zion Road in Springettsbury Township.

This is a Memorial Day tribute to Yorker Henry Laub. Midshipman Henry Laub was killed in action during the Battle of Lake Erie during the War of 1812. Besides two navy destroyers named for Henry Laub, he is one of six naval officers buried under the rotunda of the 352-feet tall Perry’s Victory and International Peace Memorial at Put-in-Bay, Ohio.

Cliff Satterthwaite captured an Avalong Barn in 1964 via his artwork and via a photograph. I call this the third Avalong Barn, after the two Avalong Barns that sat along Whiteford Road; just east of the Mansion House, now Christmas Tree Hill. The Avalong Barn closest to Whiteford Road is the one that burnt down. Directly behind that barn was the Avalong Barn that was converted into a “Pfaltzgraff Outlet” Barn and was demolished in 2013 to build a branch of Susquehanna Bank.

I attended the Preservation Celebration for 40 Years of Historic York, Inc. at the Historic Hellam Preserve. This post shares some photos of the 1758/9 log house and the springhouse on the grounds. The references are from points made in Joe Kindig’s Keynote presentation and discussions with others attending this gathering.