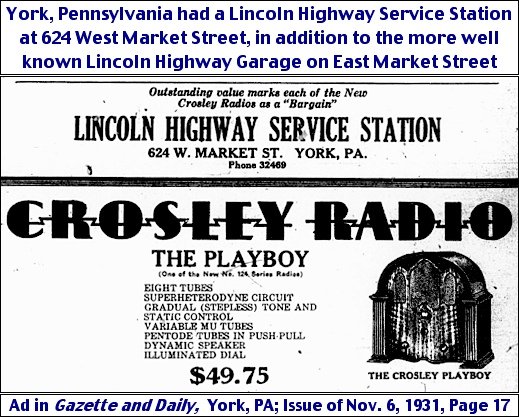 The several Lincoln Highway slides I include within my History of the Susquehanna Trail presentation always produce related questions; such as this one from Fred Hoover: “Where was the Lincoln Highway Garage that sold radios? My father always claimed it was in West York. Dad went with my grandfather when they bought their first radio there in the late 20s.” I keep a list of the questions I can’t answer on the spot. A year later, while doing other research in the York County History Center newspaper microfilms, I happened upon an ad with this answer for Fred.

The November 6, 1931, ad in The Gazette and Daily indicates the Lincoln Highway Service Station sold Crosley Radios. The ad specifically featured the $49.75 Playboy radio. Click on this LINK for a Full View of the illustrations in this post if details are cut off in the cropping of illustrations.

The eight tubes and superheterodyne circuit in The Crosley Playboy radio were claimed “so sensitive that stations can be heard with the use of the Crosley Tennaboard as an aerial. This makes it easily portable—simply carry it from room to room and plug in the light socket.”

I though it weird that service stations sold home radios. However a little research showed Crosley Radios were sold at many service stations, garages and automobile dealerships around the country; such as this 1931 ad for the same radio offered by the J. B. Cooper Motor Company in North Carolina. 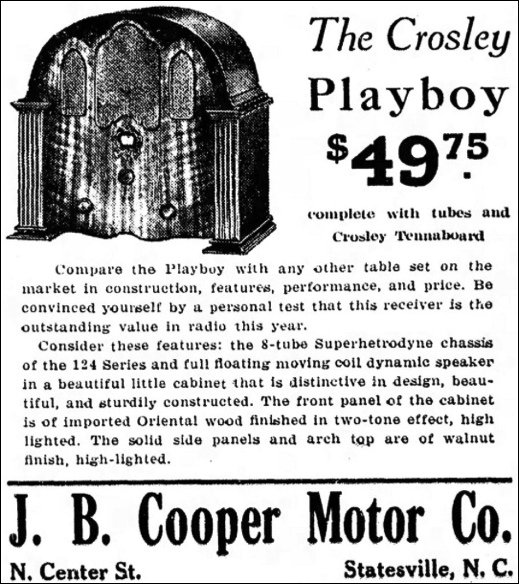