York County Deed Book 21N, Page 173, records Rachel Bahn as an early owner of the 24.8-acre property that would become Dr. Crandall’s Health School.  From the collections of the York County Heritage Trust, this is a photograph of Rachel Bahn’s house along the south side of what would become the Lincoln Highway.

On April 1, 1903, Aaron Strickler and Albert Smyser, Executors of the will of Rachel Bahn, sell the 24.8-acre property to C. Robert Kopp.  In 1906, Kopp built the mansion that can be seen in the photo background, just to the right of Rachel’s front porch.  This mansion and the 24.8-acre property become Dr. Crandall’s Health School in 1921.

Here are links to June Lloyd’s posts and to my previous posts related to Dr. Crandall’s Health School:

Continue reading for additional illustrations related to Rachel Bahn and this photo.

Rachel Bahn lived from 1829 until her death on August 15, 1902.  At the age of 20, during December 1849, she was stricken with a form of spinal paralysis and was bedridden on a couch for her remaining 53 years.  This did not prevent Rachel from becoming an acclaimed author, poet and family historian.

Beach Nichols 1876 Atlas of York County, Pennsylvania, lists owners of properties and indicates locations of buildings.  The Rachel Bahn house, shown in the photo at the beginning of this post, is noted as “C & R Bahn” on the 1876 Hellam Township plate 30 map.  This 1876 map indicates the house is at the location where I’ve placed a small yellow circle on the following 1937 Aerial Photo.

The Bahn house was located nearly opposite the entrance to what is now Shoe House Road.  From the 1937 aerial photo, it is unclear if the Bahn House still stands; however the shed and windmill behind the house are definitely gone by 1937. 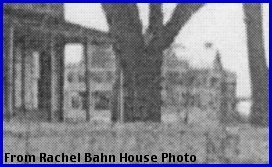 Here, I’ve zoomed-in on the mansion that appears in the background of the Rachel Bahn house photo.  C. Robert Kopp built the mansion in 1906.  Charles Robert Kopp (1865-1937) was a patent medicine manufacturer.  His product “Kopp’s Baby’s Friend” was pulled from the market following a federal investigation.  The federal probe also resulted in fines and the transfer of his property, including this mansion, to a trustee.

The mansion and the 24.8-acre property become Dr. Crandall’s Health School in 1921.  Dr. Crandall was following the Tilden plan; which relied upon a nontraditional health technique based upon improving type of food intake rather than using medical drugs to treat his patients.  Dr. George E. Crandall died on April 27, 1949.  The health school continued under the control of his son John Crandall; however this was short lived, the mansion was destroyed in an enormous fire on November 25, 1949.