Quonset huts of York-Shipley in Springettsbury 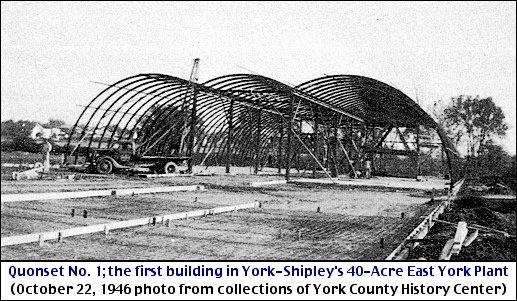 Tom Landis wanted to know, “Is there a story behind the Quonset huts which can be seen across the railroad tracks from Industrial Highway.” These Quonset huts were the first buildings constructed within a new consolidated York-Shipley 40-Acre East York Plant; erected on the southeast corner of Whiteford Road and North Hills Road in Springettsbury Township.

The October 22, 1946 photo shows Quonset No. 1 framework progressing as preparations are being made for pouring the concrete flooring. The photo comes from the collections of the York County History Center. Click on this LINK for a Full View of the illustration in this post if details are cut off in the cropping of the illustration.

The three-bay Quonset No. 1 was big; it was 80-feet wide and 400-feet long. Quonset No. 2 sat right beside No. 1 and it was the same size. As a result, even though a shortage of building materials existed at the end of WWII, York-Shipley had a new 160-feet by 400-feet plant up and running in three months. The 71-year-old Quonset No. 1 is the one still standing, while Quonset No. 2 was torn down a few years later, after being damaged in a fire.

In an 1947 interview for the company newsletter “HEAT”, Samuel H. Shipley, the president of York-Shipley commented, “Our decision to use Quonset huts for our first manufacturing operations at the East York location was the result of two factors: first, the nation-wide demand for an inexpensive but dependable ‘packaged’ heating unit for G.I. homes; and second, the fact that well ahead of our industry we had developed just such a unit … which we call the ‘Warmaire’.”

Mr. Shipley continued, “At present, our manufacturing operations are going on at four different locations in York. Our purpose in building the East York plant is to combine all the manufacturing operations of York-Shipley into one modern plant at one location. That work is going forward just as fast as the necessary materials become available. As to the number of people we shall employ in the future, that is limited only by the demand for our products and the manufacturing force necessary to meet it. I expect that many more than 1,000 people will be employed when the new plant is completed.”

The Quonset huts that formed the beginnings of the York-Shipley plant along North Hills Road, were rapidly completed in time to produce the original Levittown order resulting in over 30,000 heating boilers for one project. From there York-Shipley became the manufacturer of the world’s most complete line of automatic heating and power equipment. Their products ranged from residential YORK-HEAT oil-fired and gas-fired heating units to a full line of large industrial boilers; producing up to 1,000 horsepower.

In 1969, locally owned York-Shipley merged with outside investors. From that time on, the local plant, in a string of merged companies, was on a roller-coaster ride; ultimately mostly downhill. Parcels of the land within Sam Shipley’s 40-Acre East York Plant where sold off along Route 30. The former York-Shipley plant at 693 North Hills Road now sits vacant. In 2016, the most recent owner of the plant terminated the $1-per-year lease for Little League baseball fields located behind the plant; an arrangement that had been in place for 55-years; ever since Sam Shipley initiated it in 1961.

Something is possibly in the works for this vacant plant on 28-acres. Undoubtedly it will be turned into another warehouse, since it sits along the heavily traveled North Hills Road shortcut between I-83 and Route 30.