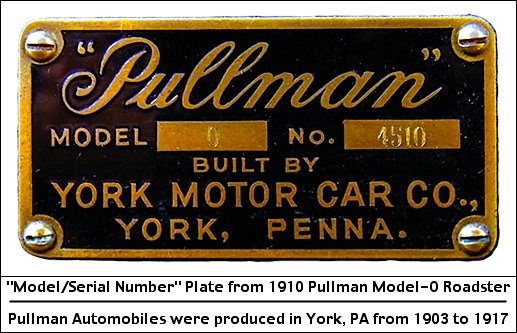 On the Fourth of July, in 1908, a card of automotive races replaced the usual horse races at Maryland’s Pimlico track. Competing were makes such as: Ford, Overland, Autocar, Cameron, Moon, Stearns and Pullman. The York built Pullmans were the big winners.

The pictured “Model/Serial Number” plate appeared on a 1910 Pullman Model-O Roadster. Pullman automobiles were produced in York, PA from 1903 to 1917. Originally known as the York Automobile Company, the firm that produced the Pullmans was reorganized as the York Motor Car Company during January of 1906. Click on this LINK for a yorkblog.com Full View of the original photo in this post if details are cut off in the cropping of photo, or if it have been removed from the ydr.com site.

The York Daily reported Robert Morton and Roy Stains were the Pullman drivers entered in four events at Pimlico: Event 2 run as a 10-miler Maryland Runabout Championship and open to stock touring runabouts or tourabouts, Event 3 run as a 5-miler open to stock touring cars of 24.1 to 40 horsepower, Event 5 run as a 10-miler runabout free-for-all handicap, and Event 6 run as a 50-miler championship open to stripped stock cars or stock chassis of 45 horsepower and under.

Quoting from the July 5, 1908 issue of The Baltimore Sun’s coverage of the auto races at Pimlico on the Fourth of July, in 1908:

“Considering the multiplicity of attractions yesterday, the Motorcar Racing Association has every reason to be satisfied with the splendid patronage accorded its Fourth of July automobile races. Something like 3,000 people turned out and the old course presented quite as brilliant an appearance as on a race day of the Maryland Jockey Club.”

“Perhaps the [most anticipated] feature number of the program was the Pimlico Free for All Handicap at 10 miles, run off as the fifth event. The best drivers had entered here. The talent was badly fooled in this race. The race went to Pullman 40 H. P., which under Robert Morton’s skillful guidance was from start to finish; with the Pullman 30 H. P., driven by Roy Stains in second place. The time of the winner was 10.36, a great performance over the Pimlico track.” Resulting in an average speed of 56.6 MPH.

“It was a banner day for the Pullman cars. Besides winning the [Pimlico Free for All Handicap] race they were first in the 50-mile championship, first in the touring car race and second and third in the Maryland Runabout Championship.” The following abridged Pullman details are pulled from the race summaries:

Robert Morton won the 50-mile championship at a time of 57.08. The other Pullman driver, Roy Stains dropped out on the 28th mile with tire trouble. An Autocar, driven by John Auchfield, finished second in 62.22. The winning Pullman car averaged 52.5 MPH.

E. L. Leinbach won the 10-miler Maryland Runabout Championship for stock runabouts, in a Stearns, at a time of 11.04. Roy Stains was second in a Pullman. Robert Morton was third in a Pullman. The winning Stearns runabout averaged 54.2 MPH.