Earlier this month, Richard Duffy submitted photos of a “Keystone” Berry Press. This photo shows the upper cross brace, containing the manufacturers stencil; Keystone Farm Machine Company, in business in York, PA, between 1890 and 1919. It is difficult to tie down an exact date of manufacture for this berry press, however it is probably safe to say that it is at least 100-years-old.

The collections of the York County Heritage Trust contain a file of Keystone Farm Machine Company information. A product catalog is in this file; unfortunately it is not dated. Page 21 of that catalog contains this illustration of the No. 2 “Keystone” Berry Press, along with a table listing specifications and prices of all the models. On the opposite side of the upper cross brace, Richard Duffy’s berry press is identified as No. 1. 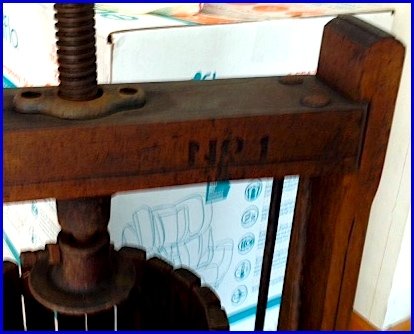 Carl Fehrenbach was at the York County Heritage Trust when I was researching this product. He remembered his Dad having one of these presses; they used it to press elderberries and grapes. That comment triggered a memory about having something in my family history files related to making Elderberry Jelly using a berry press. Continue reading for additional photos submitted by Richard Duffy, a short history of the Keystone Farm Machine Company and an over-100-year-old Elderberry Jelly recipe. 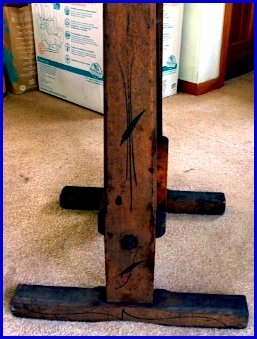 In the early 1870s business was booming for the Empire Car Works, one of two major railcar manufacturing firms within the City of York. Empire had outgrown their cramped factory on the east side of North Beaver Street. The proprietor of the Empire Car Works, Michael Schall, expanded by building a large new factory on the west side of North Beaver Street. This new factory was completed in 1873.

After the Empire Car Works went out of business, the Keystone Farm Machine Company moved from their York Street 1890 start-up location to the empty Car Works about 1894 and when they went out of business in 1919, a large building in the complex became the start-up location of the former Keystone Color Works. In the 140 years of existence for this historic industrial structure, the three principal businesses that have occupied this structure have been:

This photo shows the height of the No. 1 “Keystone” Berry Press owned by Richard Duffy. From the floor to the top of the upper cross brace is 29-inches and about 41-inches overall height.

The following Elderberry Jelly recipe and directions are believed to be attributed to Mary Ann Smith; my Great-Grandmother. It was found tucked between pages of the Family Bible belonging to my Great-Grandparents; Jacob H. Smith and Mary A. (Ferree) Smith. They lived their entire married lives in East Prospect, York County, PA., where Jacob was a carpenter and building contractor.

My Dad, Harold Smith, had memories of his Mother, Iva Smith, making Elderberry Jelly; this memory came to light after he bought some Elderberry Jelly at Market; the result was a comment concerning the jelly his Mother made tasted so much better. Several years after Dad died, the “Elderberry Jelly” recipe was found in his grandparents Bible; it is not known if his Mom was using this recipe attributed to her mother-in-law Mary Ann (Ferree) Smith.

Quoting the directions and recipe for “Elderberry Jelly”; with spelling corrections: