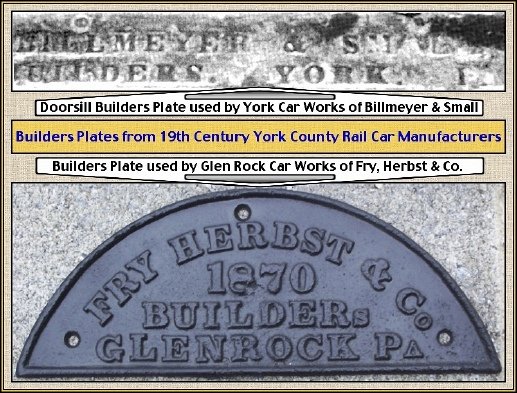 This illustration shows Builders Plates used by 19th Century Rail Car Manufacturers in York and Glen Rock. On Wednesday July 12th 2017 at 7PM I’ll be presenting a Porch Talk at the New Freedom Train Station on 19th Century Train Cars built in York County. This is one of a series of “Porch Talks at the Stations” sponsored by the Friends of Heritage Rail Trail Corridor. These 30-minute programs are free and held rain or shine. For those not wanting to stand, they ask that you bring a chair or blanket to sit on.

In my Porch Talk, learn about some neat facts concerning four York County 19th Century Rail Car Manufacturers, in York and Glen Rock. Beginning in 1847, and throughout the rest of the 19th Century, they shipped rail car product all over the United States and exported to foreign countries.

In the illustration, the top photo shows a Doorsill Builders Plate used by the York Car Works of Billmeyer & Small. This doorsill is installed in an 1882 Billmeyer & Small passenger car, which is in the collections of the East Broad Top Railroad in Rockhill, PA. Even though people have been stepping on this plate, to enter the car for 135-years, one can still read “BILLMEYER & SMALL CO. BUILDERS. YORK, PA.” In the 1800s, BUILDERS was a shorthand reference to CAR BUILDERS; i.e. a manufacturer of rail cars.

In the illustration, the bottom photo shows a Builders Plate used by the Glen Rock Car Works in 1870, when the car shops were operated locally; by Fry, Herbst & Co. Several years ago, an attendee at my Glen Rock Historic Preservation Society presentation submitted a photo from this Builders Plate in his collections.

INDEX to All My Posts Related to 19th Century Railway Car Builders of York County, Pennsylvania

Every Thursday, I post the next part of my RAILCAR GOLD novel; a historically accurate multi-generational fictional tale of hidden treasure primarily set in York County during the later half of the Nineteenth Century. By happenstance, the main character passes through York, is befriended by Charles Billmeyer and decides to stay. The main character spends the greater part of his life associated with the rail car manufacturing business Billmeyer & Small.

Generally every Tuesday I write the next few pages of RAILCAR GOLD; to do so, I dig into my files of historical background that might be associated with that part of the story. Here is an index to the chapters written thus far: