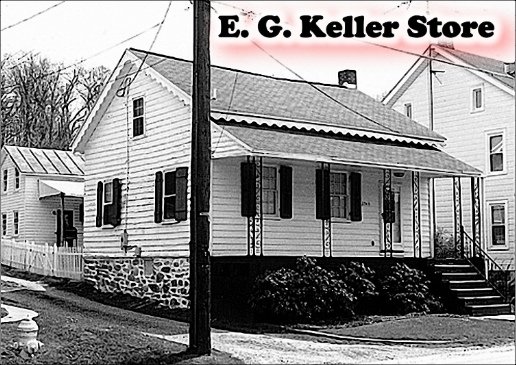 Thirteen decades ago the village of Pleasureville was bustling with 17 thriving businesses. One of those businesses was the E. G. Keller store, already well on its way at being operated for 52-years by founder Emanuel G. Keller. He was one of seven businessmen that met to start the ball rolling, which resulted in the establishment of Springettsbury Township in 1891.

Next up was Emanuel’s son, Rolandus Keller; taking over that community grocery store for another 21-years. And the string of Keller family ownership continued with Rolandus’ daughter Effie Keller; the popular owner/operator for the final 30-years, until the store closed in 1961. For over a Century, this community grocery store was owned and operated by three Keller generations; founder, son and granddaughter.

The introductory photo shows the store after it was converted to a residence. The building still stands as a private residence at 2543 North Sherman Street.

The E. G. Keller store was among over 200 early businesses, which existed in Springettsbury Township prior to 1940. The History Night event the past week covered 70 of those businesses; with 15 covered in-depth and the remainder, simply noting the owner, type of business and where they were located.

As with previous Springettsbury History Nights, they are available for viewing via a YouTube video a week or two following the event. I’ll let everyone know when the video of “Early Businesses in Springettsbury” is available.

Here are the links to previous Springettsbury Township History Nights:

The YouTube video of the “Early Schooling in Springettsbury” presentation at History Night on April 13, 2022, can be accessed through this link.

The YouTube video of the “Codorus Navigation Works” presentation at History Night on October 13, 2021, can be accessed through this link.

The YouTube video of the “Aviation in Springettsbury” presentation at History Night on July 14, 2021, can be accessed through this link.

The seventeen businesses which operated in Pleasureville during 1891, included: three grocery stores, a butcher, two stores that included both shoe making and candy making (which appear to be stores where the husband is the shoemaker and the wife is the candy maker), seven cigar manufacturers, a medical office, a building contractor, a mason contractor, and a blacksmith shop.

The names of those businesses, approximately in order of their location, from the south end of Pleasureville to the north end are:

Dr. George Conn – had a medical office that was known for removing cancers without the use of a knife; and his policy was no cure, no pay.

E. G. Keller – grocery and dry goods, then in about his 35th year of business

Pleasureville was initially successful in getting a local post office on December 30, 1887, when Emanuel G. Keller was appointed as the postmaster. However that initial local post office was never put into effect under that name, due to another Pleasureville Post Office in the state; a fact overlooked during the application process.

That decision went through the appeal process; until finally Springet (one T), was submitted as the name of Pleasureville’s post office, and that name was quickly accepted by the Postmaster General.

The Springet Post Office had five Postmasters during its existence from 1891 until closing on November 30, 1908, when Rural Free Delivery went in effect in the northern section of Springettsbury Township. That was the beginning of RD Route 5, with mail delivered directly to mailboxes at every residence and establishment in northern Springettsbury; from out of the York Post Office.

The five businessmen who served as Postmasters of the Springet Post Office and their Dates Appointed are as follows:

During the time period each of these Pleasureville businessmen served as Postmaster, they were required to supply floorspace in a corner of one of their buildings, to move in the cabinets and partitions of a rural post office installation, such as this one.