Pinpointing when Black Bridge got its Name

This notice in the June 18, 1875, issue of the York Daily is the earliest reference I’ve found with the “black bridge” name of the bridge that carries trains over the Codorus Creek as railroad traffic moves between York and Emigsville. This bridge is a prominent feature viewable from the new section of the rail trail, recently opened in Springettsbury Township. A railroad bridge was first built at this location in 1848 as a 2-span Howe-truss design and was initially known as Codorus Bridge, or Bridge No. 98 on the Northern Central Railway.

The Codorus Bridge (#98) was one of many railroad bridges put out of commission during June of 1863; when confederate forces invaded York County. On June 28th, rebels from the 17th Virginia Cavalry tried to burn the bridge. However it would not burn; evidently this Howe-truss bridge had been reinforced with iron. The rebels had to resort to several powder charges to destroy the bridge.

Late in the day of June 29th, General Robert E. Lee issued orders recalling the confederate forces from York County for a battle brewing around Gettysburg in Adams County. Within days, Union Brigadier General Herman Haupt’s U.S. Construction Corps utilized portable bridge trusses, such as the one pictured; building temporary railroad bridges to quickly get the Northern Central Railway back into operation.

A month after the temporary bridges are in place, the Northern Central Railway announced plans to build permanent replacement bridges to replace temporary bridges. The August 11th, 1863, issue of the Adams Sentinel stated that the new permanent bridges “over the Codorus near Loucks’s mill, the Gut and the Conowago, are to be of wood of the Howe-truss patent.”

In conversations, about in 1905, old timers on the railroad recalled how a long-ago railroad bridge maintenance crew misunderstood their painting instructions for that bridge. Instead of only painting the iron tie rods and all other iron hardware, that crew painted everything black; timbers included. The bridge maintenance crew took a lot of ribbing about their Black Bridge; which became its nickname, until eventually becoming its official name.

The “black bridge” in quotes, within the newspaper notice of June 18, 1875, appears to point that 1875 was a time when Black Bridge was still a nickname. This bridge is referred to as Codorus Bridge at least to 1872, per the latest newspaper article mentioning this bridge by the initial name. Therefore I believe the painting mishap occurred between 1872 and 1875; i.e. the mishap that gave the bridge its eventual official name as Black Bridge. 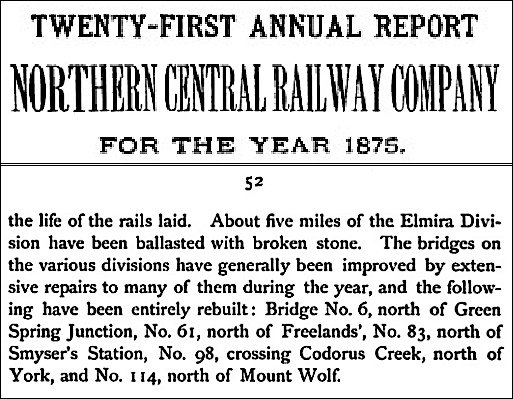 The York Daily notice of June 18, 1875, indicated “black bridge” is being repaired. Evidently repairs were more extensive than anticipated, because the Annual Report for 1875 notes the bridge was entirely rebuilt.

There have been at least four, and possible six, bridges at the Black Bridge location; including: at least (2) 2-span Howe-truss bridges of wood timber with iron tie rod construction, (1) temporary bridge in 1863 and (1) 4-span girder bridge, that has been in place since about 1901. Between 1848 and 1863, it is possible that the 1848 Howe-truss bridge was replaced with another design that would not burn, or possibly the wood timbers on the original bridge were reinforced with iron. Details on the 1875 “entirely rebuilt” bridge are still elusive; is this when the bridge went from 2-span to 4-span, and/or is this when the bridge went from a truss to a girder design?