Photos of Corn Sheller; Made In York by Keystone Farm Machine Company 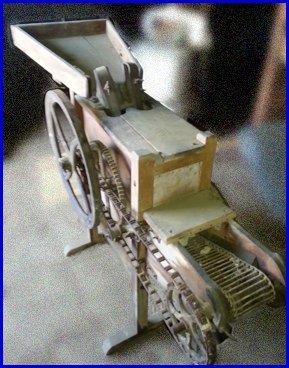 Lee Good provided several photos of an Economy Corn Sheller; one is shown to the left and more are shown later in this post.  It was manufactured by the Keystone Farm Machine Company; in business in York, PA, between 1890 and 1919.  It is difficult to tie down an exact date of manufacture for this corn sheller, however after reviewing several Farm Machinery files at the York County Heritage Trust, circa 1900 should be close.

The collections of the York County Heritage Trust contain a file of Keystone Farm Machine Company information.  A product catalog is in this file; unfortunately it is not dated.  The lead image in this post is the catalog illustration of the Economy Two Hole Sheller.

In the early 1870s business was booming for the Empire Car Works, one of two major railcar manufacturing firms within the City of York.  Empire had outgrown their cramped factory on the east side of North Beaver Street.  The proprietor of the Empire Car Works, Michael Schall, expanded by building a large new factory on the west side of North Beaver Street.  This new factory was completed in 1873.

After the Empire Car Works went out of business, the Keystone Farm Machine Company moved from their York Street 1890 start-up location to the empty Car Works about 1894 and when they went of business in 1919, a large building in the complex became the start-up location of the former Keystone Color Works.  In the 140 years of existence for this historic industrial structure, the three principal businesses that have occupied this structure have been:

Two readers have provided photos of products manufactured by the Keystone Farm Machine Company.  The post on Friday examined the Invincible Corn Sheller.  Continue reading for more on the Economy Corn Sheller.

Here are the details about the Economy Two Hole Corn Sheller that appear in the Keystone Farm Machine Company catalog.  The information specific to this model:  Capacity 60 to 70 bushels per hour (shelled corn), Price $22.00 and Weight 300 pounds. This sheller is very strongly and substantially made, having a very heavy frame, well bolted together and especially made for running by light power. Speed of disc wheel (pulley wheel) is specified as 600 RPM.  The sheller is furnished with a fan for cleaning the corn.

The following construction details apply to all corn shellers produced by the Keystone Farm Machine Company.  The frames are made of Hard Maple, mortised and tenoned and are securely fastened together by joint bolts, steel dowels or brace rods.  Boxes are engine bored; Shafts are cold rolled steel; and Feed Spouts are adjustable for large or small ears of corn.

This Lee Good photo shows the lettering on the side of his corn sheller.  Correspondence in the York County Heritage Trust file of Keystone Farm Machine Company information ask about lettering and decorations used on their products.  My experience is that catalogs containing photos are the best guide.  In catalogs with only sketched illustrations, such as the Keystone Farm Machine Company catalog, artists tend to make the lettering and decorations fancier, as compared to what actually occurs on the products produced.  Thus this photo provides a better lettering guide than the catalog illustration at the beginning of this post.

The following photo shows a nice side view of the Economy Two Hole Corn Sheller.  The chain wheel driven cob transport rack is located to the right.  The chain drive might operate better with the chain tension wheel on the top chain; i.e. orientated as shown in the illustration at the beginning of this post.