The pathways around Mt. Rose Cemetery are one of my regular walking places; definitely good cardio with those hills!  I’ve always wondered what the inside of the huge granite mausoleum looked like, so I acted upon the York County Heritage Trust notice about yesterday’s open house.

Continue reading for more photos and information on the Mausoleum’s connection to John H. Myers

The first large-scale development of Mt. Rose Cemetery began in 1903.  Nevertheless, the first cemetery in that area dates back to the late 1880s; i.e. the church cemetery of the Green Hill Evangelical Association in the northeast section of today’s cemetery 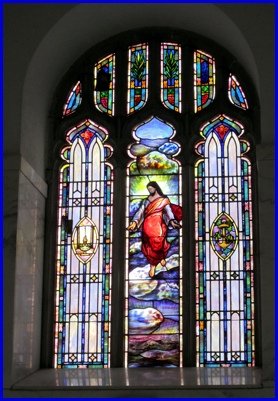 The majestic granite Keystone Mausoleum was built in the 1930s and contains 518 indoor crypts.  Historical background at the open house was provided by John Piermatteo, Family Services Advisor with Mt. Rose Cemetery, and Lila Fourhman-Shaull, Director of Library & Archives of the York County Heritage Trust. 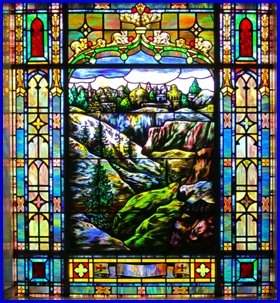 A plan of the mausoleum was displayed however much of the construction details are lost; such as who supplied the stained glass windows.  The plan of the mausoleum noted, “to be erected in Mont Rose Cemetery, York, Pa by the Keystone Mausoleum Corporation,” and “D. M. Rothenberger, Architect, Reading, Pa.”

Lila noted a connection of the Mausoleum to John H. Myers; he and family members are in the first group of crypts to the right after entering the mausoleum.  It was noted that John H. Myers and Sons has done mausoleum maintenance in the past.

The curiosity got the better of me last night, so I started doing some Online searches.  Prior to the 1930s there was a Keystone Mausoleum Company doing business at 1272 Liberty Street in Franklin, Franklin County, Pa.; did this business eventually incorporate and is the company that built the Keystone Mausoleum at Mt. Rose Cemetery?  That is what I suspected until I discovered the following article on the death of John H. Myers that appeared in the September 24th 1937 issue of The Millersville Snapper.  This article notes that John H. Myers is President of the Keystone Mausoleum Corporation.

John H. Myers graduated from Millersville in 1895 and taught in the public schools of York County for 20 years.  He was Principal of the Dallastown schools in 1916 when he decided to try his hand at another profession.  In 1916 he opened his first lumberyard at Dallastown.  In about 1921 he expanded by building the John H. Myers business at 1275-1285 West King Street in West York.

In a personal connection; the first job my Dad, Harold L. Smith, got after his discharge from the Army Air Forces following WWII was with John H. Myers & Sons.  He worked 10 hours a day and 5 hours on Saturday assembling door frames, window frames and sashes.  The post-war building boom was in full swing.

I found a few bits and pieces about the architect D. M. Rothenberger.  He initially had his office in Lancaster; from the 1890s until roughly the early 1920s.  He was primarily an architect for businesses, churches, elaborate cemetery gates and mausoleums.  In this 1915 article in the trade publication Engineering and Contracting, D. M. Rothenberger is the architect on a $90,000 60 x 100-ft. mausoleum for the Pennsylvania Mausoleum Company.