Ernie McCall, The Original Submarine Sandwich Man of York; in a neat 1959 Ad

I ate many a sub at the North Pole Drive-In on the southeast corner of N.O.P. Road and North Sherman Street, however I never ate at Ernie McCall’s other location in Weigelstown.  The ad noted the address as 2820 Carlisle Road.  I was curious what details I could uncover about the Carlisle Road location.

The 2820 Carlisle Road address is located on the southeast corner of Emig Mill Road and Carlisle Road; that location is now a Turkey Hill Minit Market.  Here are wider aerial views of the same 2014 and 1956 aerial photos that appeared at the beginning of this post.

Last week, I discovered Shirley (Coble) Hite’s “Memories of Weigelstown’s North Pole,” within an hour following my explorations about the 2820 Carlisle Road location; check out Joan Concilio’s post at this link.  I agree with Joan, it is neat when such serendipities occur. 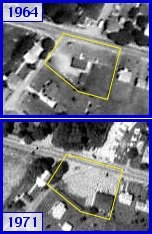 Additional aerial views of the same lot are shown in these 1964 and 1971 aerial photos from the York County Archives.  By May 30, 1964, it appears that Ernie has paved the whole front of the lot, facing Carlisle Road.  By August 11, 1971, the North Pole Drive-In building no longer stands and the new larger building tucked in the back corner of the lot may already be the Turkey Hill Minit Market.  If anybody has ground level photos of Weigelstown’s North Pole Drive-In, please consider sharing them.

Quoting this ad, that comes from the September 13, 1959 issue of The Sunday News:

Hello Folks!!  ERNIE McCALL, The ORIGINAL SUBMARINE SANDWICH MAN of York, will again be serving you at the YORK FAIR.

Thousands of people have discovered that a Submarine from McCALL’s is the best buy on the FAIR-GROUNDS.

Why settle for the rest, when you know where you can buy the best—the ORIGINAL is always better than the duplicate—Serving the public for 12 YEARS.  Thank you for your past patronage.  Be looking forward to seeing you again at the YORK FAIR—between the north end of the GRANDSTAND and the Annex.

In 1959, Ernie McCall states he has been serving the public for 12 years; i.e. beginning in 1947.  Dareen Angel, another of Joan Concilio’s readers, noted that Ernie McCall started his sub business in the first block of North Beaver Street, and Dareen remembered bringing Ernie’s subs home in 1947.

I’ve found some additional ads and some neat information at the Office of York County Recorder of Deeds related to the North Pole Drive-In and the Florida Room.  First, here is Ernie’s early history.  Additional installments with my finds will follow in the coming weeks.