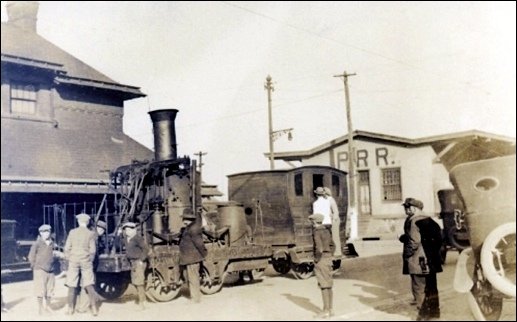 In 1832 Phineas Davis built the “Atlantic” an improved version of his 1831 “York” locomotive for the Baltimore and Ohio Railroad. While the “York” was the first successful coal burning locomotive in the United States, the “Atlantic” was considered the first commercially successful locomotive; finishing its active life as a rail yard switcher for the B & O in the 1890s.

In 1924, the “Atlantic” was brought out of retirement. It ran, under its own power, pulling a vintage coach, throughout York, Pa. on trolley tracks. The engineer at the throttle was the grandson of the engineer that drove the “Atlantic” when it was operated by the Baltimore and Ohio Railroad in 1832.

Several articles on the front page of the November 28, 1924 issue of The Gazette and Daily were devoted to honoring Phineas Davis; with the three-column headline: “Thousands Pay Tribute To Memory Of Phineas Davis, A York Inventor.” Quoting the beginning of one of those articles:

“Event One Of Most Memorable In History Of York”

“Thousands of York citizens yesterday joined in paying tribute to the memory of Phineas Davis, York inventor, who built the first successful coal burning locomotive, pioneer in the solution of the problem of transportation, and which was to prove a great boom to civilization.”

“This tribute was featured by the unveiling of two tablets and a firemen’s parade, Phineas Davis having been a member in his day of the historic Vigilant Fire Company, it having been his especial duty to keep the company’s engine in good condition and by holding several memorial services.”

“And in addition to tributes audibly voiced there was also silent acknowledgement paid by thousands, manifested in the interest with which they viewed a model of “The York,” the first coal burning locomotive, built by Phineas Davis, resting in the Willys-Knight-Overland automobile salesroom, [149-155] West Market Street [just east of the Gates House], and by inspection of “The Atlantic,” another early locomotive built by the great inventor, as it traveled over a portion of the [trolley] tracks of the York Railways Company, and while it was parked on East North Street, opposite the Pennsylvania Railroad station.”

Besides several pages providing continuation of the page 1 articles, page 5 of the same November 28, 1924 issue of The Gazette and Daily contained a four-column spread of more articles about the “Phineas Davis Memorial Celebration.” One of those articles noted that Nevin M. Wanner, President Judge of the Courts of York County suggested naming the new hotel “The Phineas Davis;” although another name “The Yorktowne” was eventually selected.

Riding in the vintage coach, pulled by the 1832 “Atlantic,” were: “E. S. Hugentugler, mayor of York; Jonathan Jessop the fifth, of Pittsburgh; and James Rudisill, vice president of the committees of the Engineering Society and of the Vigilant Fire Company.”

On Tuesday October 2, 2018 at 6:30 PM, Clockmaker began York’s Railroad Heritage will be presented by Stephen H. Smith at the Lower Windsor Area Historical Society. Meeting is open to the public and is held in the Lower Level of the Lower Windsor Township Community Building at 2425 Craley Road (1-mile west of Craley on Route 624). Parking in the lot on the east side of the building allows for ground level entrance to the lower level. This presentation covers York’s railroad manufacturing heritage of the 1800s; with an emphasis on Phineas Davis, who was a trained clockmaker and steam engine innovator in addition to designing “The York” locomotive.