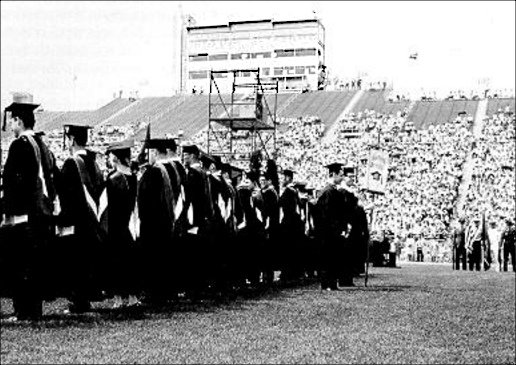 Penn State Spring Commencement was same day broadcast on Public Television for the many in Central Pennsylvania who could not attend in 1972 due to Hurricane Agnes. This year a virtual commencement was livestreamed to all graduating students, in response to the coronavirus pandemic.

Penn State Spring Commencement in 1972 was held June 24th; much later in the year than present early May graduation. The shift to earlier graduation occurred upon the shift from a Term to a Semester system; i.e. after a three-term school year (Fall, Winter & Spring) was replaced with Fall and Spring semesters.

I was slated to receive my Penn State Baccalaureate Degree on June 24th, 1972 during Commencement Exercises at Beaver Stadium. That is where spring graduation occurred on University Park from the early 1960s until 1984; which allowed practically unlimited family and friends to attend a common commencement.

This aerial photo illustrates the description of the Beaver Stadium commencement exercises given to prospective graduates in 1972. The speaker’s stand will face north at the 25-yard-line. Advanced Degree Graduates must line up under the north grandstands as instructed by your college and proceed to seats on the field in front of the speaker’s stand. Baccalaureate Graduates can sit anywhere they wish in the marked section of the north stands. Families and friends of the graduates sit in the east and west stands.

In 1972, Hurricane Agnes dumped nearly continuous heavy rain on Tuesday, Wednesday, Thursday and Friday, over the Susquehanna River watershed, in the days before the Saturday June 24th commencement at Beaver Stadium. On Friday, radio and television messages informed people in Central Pennsylvania, planning to attend commencement at University Park, to not attempt the drive; it is extremely dangerous, with many roads flooded, electric wires down, and most of the flood cresting occurring on Saturday.

The people already in State College and those able to attend held an indoor Commencement at 10:30 A.M. on Saturday. The scheduled speaker, James A. Michener was already in town. The exercises were filmed and broadcast on Public Television the same day at 6:00 P.M. for the benefit of those who could not attend. We received our diplomas in the mail two weeks later.

Spring Commencement is now held at the Bryce Jordan Center, however it was quiet during scheduled graduation on Saturday May 9th, 2020; instead replaced by virtual commencement exercises, which were livestreamed to all graduating students, in response to the coronavirus pandemic.