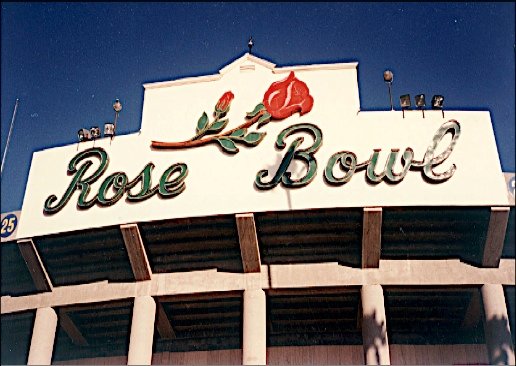 The present Rose Bowl stadium hosted its initial Rose Bowl Game on Monday January 1, 1923. Penn State played the University of Southern California in the game. Penn State scored the first three points in that stadium, however USC went on to win 14 to 3.

For that 1923 game, the Penn State team arrived in Southern California on December 24th, following a three-day train trip across the country. The traveling party consisted of 22-players, along with 7-coaches and trainers. One-Hundred years later, traveling is a matter of hours and the traveling party is much larger; when on Monday January 2, 2023, Penn State plays Utah in the 109th Rose Bowl Game.

Eight early post-season football games, associated with the Pasadena Tournament of Roses were played at Tournament Park; Caltech’s present-day athletic field. As the football crowds grew, the Tournament of Roses hired architect Myron Hunt to design a larger venue in Pasadena’s Arroyo Seco area. The new stadium was completed in October of 1922. A Pasadena Star-News reporter dubbed the stadium “the Rose Bowl.” The initial seating capacity was 57,000; however it was expanded several times and now seats over 102,000.