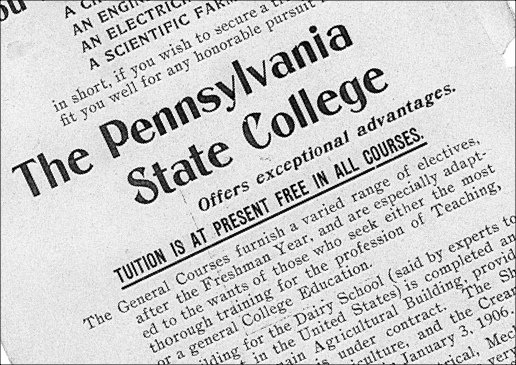 Part of advertisement by The Pennsylvania State College highlighting: Tuition is at present Free in All Courses. Ad is located inside the front cover of the 1905-1906 Directory of the Teachers and School Directors of York County and York City, PA (Source: Collection of York County History Center, Manuscript File 963)
Posted by Stephen H. SmithFebruary 21, 2022February 21, 2022 All Posts, Maps, One-Room Schools, Pennsylvania, Schools, Various Locations, York County

Discovery of the ad was a chance find, while checking into a query for Debbie Rohrbaugh. She had always heard her Great-Grandfather taught in a one-room school, however took factory work after only teaching that single school year, beginning in 1905. Debbie stated Newspapers.com was already extensively searched with no luck in an attempt to discover the name of the school.

The covers of 1905-1906 Directory were in bad shape and loose; that is when I noticed the following Penn State ad, highlighting: Tuition is at present Free in All Courses.

The ad begins: “If You wish to Become: A Chemist, An Engineer, An Electrician, A Scientific Farmer, A Teacher, A Lawyer, A Physician, A Journalist, in short, if you wish to secure a training that will fit you well for any honorable pursuit in life, THE PENNSYLVANIA STATE COLLEGE Offers exceptional advantages. TUITION IS AT PRESENT FREE IN ALL COURSES.”

“Penn State an illustrated History” by Michael Bezilla, confirms Penn State had free tuition for in-state residents during the early 1900s. Nonresidents of Pennsylvania paid $100 annually. However there were other charges, which applied to every student, such as: $17 per academic year, to cover heat, light and janitorial expenses; and $5 as a refundable deposit against damages. Dormitory rooms in Old Main typically ranged in price from $56 to $73 for a year, with students residing off campus paying a similar amount.

Quoting the bottom of the Penn State ad: “The courses in Chemistry, Electrical, Mechanical and Mining Engineering are among the very best in the United States. Graduates have no difficulty in securing and holding positions.”

If one passed the examinations, the next day you started college. In 1905 one would have access to Penn State’s new Carnegie Library, which opened in 1904. The library was built with a $150,000 gift from Andrew Carnegie, a member of Penn State’s Board of Trustees since 1886. The library had previously been housed within Old Main. Carnegie Library became Carnegie Building after Pattee Library opened in 1940, following three-years of construction at the top of the Mall.

Penn State’s Main Engineering Building opened in 1893. It was located next to the main campus gate at Allen Street. The demand for engineering support buildings was fueled by heavy demand for these courses. By 1904, three-fourths of the student body took engineering courses.

The Main Engineering Building was destroyed by fire in 1918. It was replaced by Sackett Building, plus west of Sackett: Engineering Units A, B, C, D, and E. In the late 1950s, Hammond Building was added, right next to West College Avenue; extending from the Mall at Allen Street, all the way westward to Burrowes Road.

The following shows a 1910 Birds-Eye-View of the area west of The Campus Mall on the Pennsylvania State College Campus. The Armory was named for its use by the ROTC programs at Penn State, however the building, and the grounds west of it, also served as gymnasium, playing fields, dance hall, banquet hall and class scheduling hall. The Armory had been built in 1892 and was demolished in 1964, to construct the east wing of Willard Building.