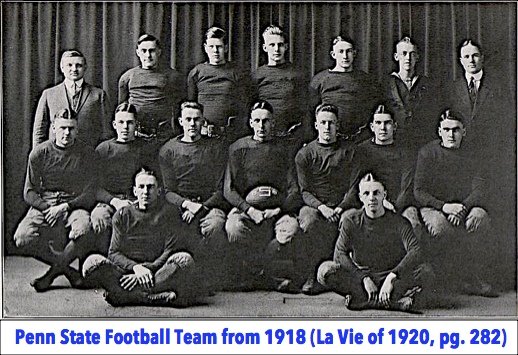 Penn State Football had nine games scheduled in 1918 however the combination of WWI and the Spanish flu pandemic compelled the cancelation of five games.

The nine originally scheduled 1918 football opponents were: Muhlenberg, Gettysburg, at Washington and Jefferson, at Dartmouth, Lebanon Valley, at Cornell, Rutgers, at Lehigh, and at Pittsburgh. However by summer, Penn State’s entire varsity football team had enlisted; including head coach Dick Harlow. The same happened at many other colleges, such that several schools canceled football outright.

The War Department heavily encouraged intramural sports at colleges, since they found one-third of draftees were being rejected as physically unfit. They also encouraged intercollegiate sports to continue; if at all possible. Penn State decided to move forward with football after they hired Hugo Bezdek as Director of Massed Athletics; with him also taking on the job as head football coach. Per the photo, you’ll see he had few players, to work with, to field a varsity football team.

Penn State’s opening day home football game was called off with the news: “There will be no football at Muhlenberg College this fall. This announcement was made last night when the game scheduled with Penn State was officially called off. The changed conditions created by the new draft law caused the decision to give up football.” The following week’s home game against Gettysburg College was canceled for the same reason; although Gettysburg fielded a team later in the season. The away game against Washington and Jefferson was canceled; as a precaution by Health Officials, due to the extent of Spanish Flu in the Pittsburgh area.

The away game against Dartmouth, in New Hampshire, was canceled since the travel distance exceeded maximums specified by Health Officials. However on that Saturday October 19th, Bucknell was available for a short trip to State College. The football teams were suiting up in their locker rooms, when Health Officials made the call, canceling the game. Likewise the home game, the next Saturday, against Lebanon Valley, was also canceled.

Cornell had already made the decision to cancel their game, hosting Penn State at Ithaca, New York, on November 2nd; prior to restrictions being relaxed by Health Officials. The Wissahickon Barracks Naval Station near Cape May, New Jersey, had a football team that was willing to travel to State College on November 2nd. That became the first Penn State Football game of the 1918 Season. The game ended in a tie.

The next two Saturdays featured a home loss to Rutgers and an away win at Lehigh. The fourth, and final game, of the 1918 Season was the Thanksgiving Day rivalry against Pitt; at Forbes Field in Pittsburgh. Penn State lost, although they were the only team to score points against Pitt that year.

The Spanish flu at State College

“Many communities fared worse than State College, where six students and six townspeople died from influenza,” wrote Michael Bezilla, about the influenza epidemic that struck the nation in the autumn of 1918; per page 102 of his 1985 book, “Penn State an illustrated history.”

One of the students was from Central Pennsylvania; as reported in The Evening News of Harrisburg on October 17, 1918. “Harvey Baturin Dies of Flu at State College. Harvey Hirsh Baturin, 226 Harris Street, this city, died in State College last night from pneumonia. He was a member of the freshman class of the college, being enrolled in the industrial engineering course. He was twenty years old, and a son of Lewis Baturin, who resides at the Harrisburg address.”

“The boy first became ill on October 7, when he went under the care of Dr. Joseph P. Ritenour, the college physician, at a fraternity house, where he was living. A week later pneumonia developed and complications set in. His parents and a sister were with him when he died. The body was brought to Harrisburg this afternoon.”

Links to a few other football posts include: