Pennsylvania’s first Gino’s was in Springettsbury

I discovered interesting follow-up deeds after researching my post: LoPiccolo’s in Violet Hill connection to The Woods in Springettsbury Township.  The owners of the property at 2500 East Market Street leased that plot of land to “Gino’s No. 1 of Pennsylvania, Inc.” Additional research does indicate Pennsylvania’s first Gino’s Drive-In Restaurant was opened in the spring of 1961 along East Market Street, directly across from the York County Shopping Center. This popular fast-food drive-in featured 15-cent hamburgers, 10-cent golden French fries and starting in 1962 also offered Kentucky Fried Chicken; all of this nearly a decade before the first McDonald’s was built in York County.

This photo comes from a collection of several old Police Polaroids donated to the Springettsbury Township Historic Preservation Committee. Each Polaroid in that collection contains the date and time taken; this one was taken September 8, 1965 at 7:35 a.m. At that time, evidence was being recorded in the parking lot of the Lincoln Woods Inn, the neighbor to the east of Gino’s. I zoomed in on this Gino’s image that was part of the Polaroid background.

In 1957, Baltimore Colts running back Alan Ameche and his friend Louis Fischer got into the restaurant business in Baltimore. In 1959, after they brought in Colts’ captain Gino Marchetti, the first Gino’s brand drive-in restaurant opened at 4009 North Point Road in Dundalk, Maryland. Gino’s opened a few more drive-ins around Baltimore, before expanding into the Philadelphia market in the fall of 1960; however that drive-in was located across the Delaware River in Cinnaminson, New Jersey.

Pennsylvania’s first Gino’s drive-in was opened in the spring of 1961 at 2500 East Market Street, directly across from the York County Shopping Center. I was 11-years old at the time, the oldest of five children in our family. Gino’s became one of the places we’d stop on our way home from attending Sunday School in the city. During really nice weather, we’d eat in the car; although usually we’d make a quick stop and take the bags of burgers and fries home. The following is a typical 1961 Gino’s newspaper ad. An early Gino’s slogan was, “A Meal For Five a Dollar Seventy-Five.”

The following comparison contains a 1961 Gino’s price card, handed out following the opening in York, placed next to the photo of 1965 sign in front of the East Market Street location. This card shows what the Gino’s drive-in structure, in York, looked like in the early 1960s. This side-by-side Gino’s sign comparison also illustrates the before and after look of the sign, after acquiring the franchise for Kentucky Fried Chicken in the middle-Atlantic states during the summer of 1962. Large KFC plastic buckets were attached to the “circled 15-cents” parts of the sign. 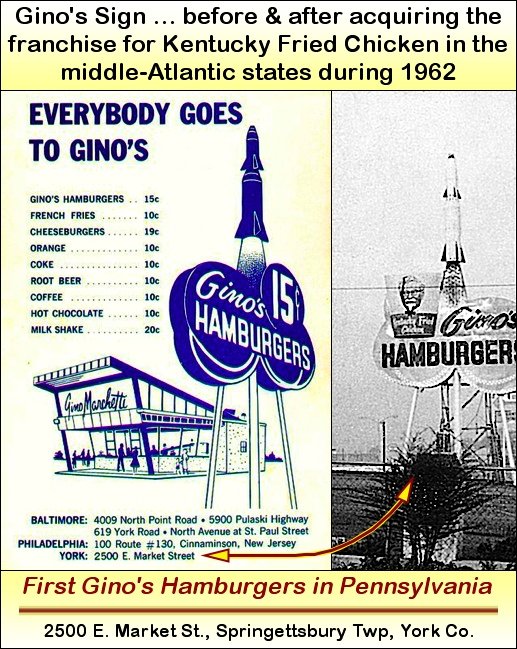 As soon as Gino’s started to offer Kentucky Fried Chicken, Gino’s became the place our family would stop, at least every other week, on our way home from attending Sunday School in the city. We’d nearly always get a mix of burgers and chicken. The following is a typical 1962 Gino’s newspaper ad. This ad contains Gino’s signature slogan, “Everybody Goes to Gino’s.” 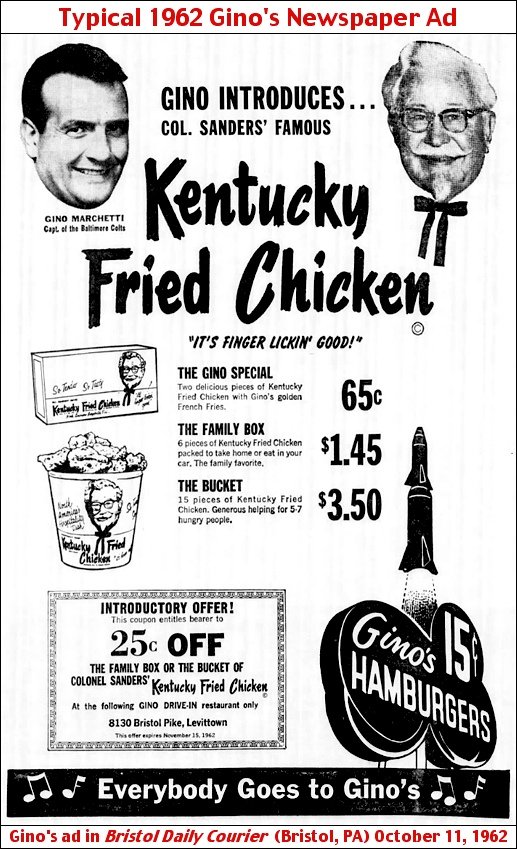 Quickly additional items were added to Gino’s menu. The Sirloiner hamburger was ground from sirloin steak. The Gino Giant predated the Big Mac of McDonald’s fame. A McDonald’s owner in Pittsburgh developed the Big Mac. One wonders if that Pittsburgh owner got his inspiration from the Gino Giant. The advertised ingredients of a Gino Giant were: Two all-beef hamburgers, delicious gourmet sauce, lettuce, cheese, in a double-decker sesame seed roll.

In 1982, Marriott Corporation acquired the 359 company-owned Gino’s locations, which stretched all across the Middle-Atlantic region, converting many of these locations to their Roy Rogers Restaurants. If a Gino’s was already in close proximity to a Roy Rogers, Marriott’s continued to operate the Gino’s drive-in for a number of years. Such was the case for the Gino’s at 2500 East Market Street, since a Roy Rogers already existed on the northeast corner of Memory Lane and Industrial Highway.

The Gino’s at 2500 East Market Street closed on January 17, 1985. For the remainder of the 1980s the building sat vacant. About 1990, plans were to open a Gilligan’s Restaurant at the site; however I don’t believe they ever had an opening. The Boulevard Restaurant did operate at the site for several years in the early 1990s. In the later 1990s, The Ground Round opened and was doing a good business until a fire destroyed the place. Perkins Family Restaurant built on the site about 2000 and continues to operate there.