Original Route of the Monocacy Road in Eastern York County?

Quoting three lines within a 1912 article on the Shultz House by Dr. I. H. Betz; appearing in the January 27th, 1912 issue of The Gazette:

The Monocacy road, extending from the Susquehanna to the Potomac rivers, was laid out in 1739.  When it was established it passed in front, or the north side of the [Schultz] house.  After the era of turnpikes set in, the old Monocacy road was vacated and the Schultz house became isolated and was utilized as a farmhouse wholly.

Dr. Betz writes a lot about the Monocacy Road passing in front of the Shultz House and that it was a popular Tavern along that road until the completion of the Susquehanna & York Turnpike in 1817.  A line within a 1902 article co-authored by Dr. I. H. Betz; appearing in the October 1902 issue of The Pennsylvania-German, provides an additional detail about the roads between Wrightsville and York:

The Monocacy road was about two miles longer than an air line, while the turnpike approached it most nearly, although the railroad follows as a close second.

A “two miles longer” road is included on the 1821 Map of York and Adams Counties by Daniel Small & William Wagner.  Were they cryptically showing the original route of the Monocacy Road?  Below the 1821 Map, I’ve included a 1908 Topographic Map where I’ve outlined a similar route, which uses many existing roads.  This outlined similar route of the Monocacy Road does place that road in front of the Schultz House.

What is the Original Route of the Monocacy Road?

Neal O. Hively has the 1739 Road to Monocacy platted on his 1993 Connected Draft Maps of The Manor of Springettsbury.  The route on Hively’s map appears to follow the turnpike (now the Lincoln Highway; i.e. Route 462).

I was still curious what this route would look like platted upon a Topographic Map.  I remember seeing the Monocacy Road metes & bounds in both the 1886 Gibson (p. 321) and 1907 Prowell (Vol. 1, p. 98) History of York County, Pennsylvania.  The Prowell history contained an exact copy of the Gibson history.  I’ve seen enough deeds that have not been transcribed properly to suspect the Monocacy Road metes & bounds in both Gibson and Prowell had many errors.

On the Internet, Google scanned a copy of The Pennsylvania-German in the Settlement of Maryland; published in 1914 by Dr. Daniel W. Nead of the University of Pennsylvania.  Page 47 of Dr. Nead’s book contains the Monocacy Road metes & bounds taken directly from Lancaster County’s Road Docket No. 1, from 1729 to 1742.

Continue reading for my findings.

Platting of the Monocacy Road metes & bounds in Dr. Nead’s book, was close to the turnpike over its whole length.  Again errors in transcription were suspected since the route overshot the point where it crossed the Codorus Creek by 1.4-miles and that was without taking into account the strange metes & bounds term “South 82 lor” after the route crossed the Little Codorus Creek. 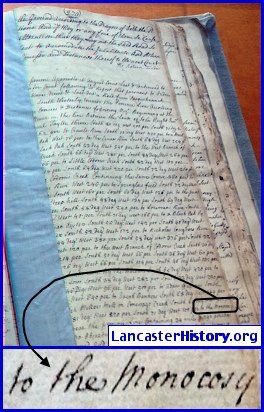 LancasterHistory.org (The Lancaster Historical Society) has the original Monocacy Road records.  This is a photo of page 279 of “Road Docket No. 1, from 1729 to 1742;” containing the Monocacy Road metes & bounds as recorded in 1739/40.  These records are from the Quarter Sessions Courts of Lancaster County, Pennsylvania, for the years 1729 through 1742.

The archival linen tape used to repair the left side of page 279 covers the first word in each line, however one can carefully hold the page vertical and look through it to determine the covered word.

I’ve noted all the places where transcriptions in the previous sources do not match the original 1739/40 Lancaster County document.  Next week the original Monocacy Road metes & bounds will be platted on a Topographic Map. 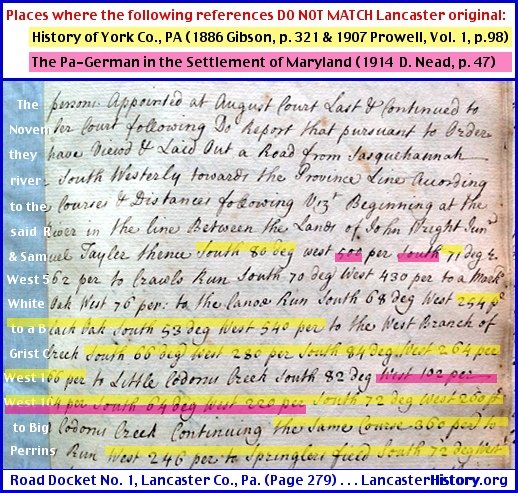