Numbers Game at the YORK FAIR

Cliff Satterthwaite submitted copies of several pieces of YORK FAIR artwork that he did for The Gazette and Daily. This piece, done during the preparations for the 1958 Fair, is entitled ‘Getting Ready For The Fair.’ The caption continues:

Some of the many preparations for tomorrow’s opening of the 106th annual York Inter-State Fair were caught in this sketch by artist Cliff Satterthwaite for The Gazette and Daily. Preparations end and activities begin tomorrow morning with the traditional children’s day leading off the fair’s five-day run. About 58,000 tickets have been distributed to students and teachers. 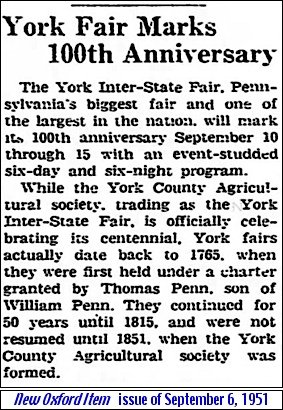 This article was likely a fair press release, since I saw the exact same text in several South Central Pennsylvania and Maryland newspapers. The September 6, 1951 article shown is from the New Oxford Item of New Oxford, PA.

The York Inter-State Fair, Pennsylvania’s biggest fair and one of the largest in the nation, will mark its 100th anniversary September 10 through 15 with an event-studded six-day and six-night program.

The York Fair web site notes that the York County Agricultural Society was formed in 1853 with their first fairgrounds established in 1856 (near the southeast corner of King and Queen Streets in York). This disagrees with 1851, a year which formed the basis for the 100th Anniversary Celebration during the 1951 York Fair. Lets see what John Gibson has to say.

The project of forming an Agricultural Society in York County, was first considered at a public meeting held in the court house on November 22, 1851, the object of the society being, “to foster and improve agriculture, horticulture and the domestic and household arts.” The first regular meeting of the society was held January 5, 1852, at which officers and managers were elected. The first exhibition was held October 5, 6 and 7, 1853, on the Public Common in the Borough of York, and resulted in a net profit of $3,000. The second exhibition was held in 1854, and resulted in a loss, the receipts not covering expenses by $110.

No exhibition was held in 1855, in which year the present location [near the southeast corner of King and Queen Streets] was purchased, originally containing but seven acres and fifty-one perches, but which has gradually been enlarged by purchase, so that at this time fourteen acres are enclosed. The cost of the original tract was $2,057.24, the value of the present $50,000. Since 1855, with the exception of the years of our Civil War, viz.: 1861, 1862, 1863 and 1864 (during part of which years the grounds were used by the government, and troops were quartered on them), annual exhibitions have been held, up to the present year (1885), which marks the 28th.