Robotics now; Northwest Triangle was once Coal and Tobacco 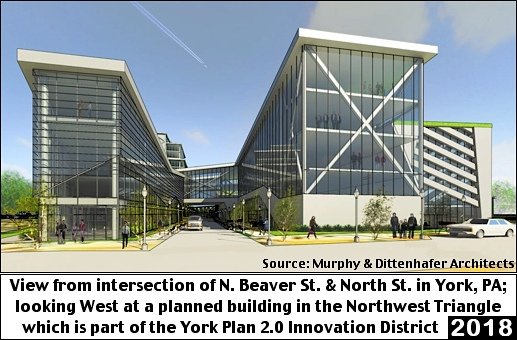 Coal yards and wholesale leaf tobacco once covered most of the Northwest Triangle’s recently announced Innovation District. York Exponential, a robotics firm, is the driving force behind this project.

This view, from the intersection of North Beaver Street and North Street in York, looks west at a planned building in the Innovation District. The Murphy & Dittenhafer Architects rendering shows North Street heading west between two buildings, connected by a multi-story enclosed bridge.

The following 1893 photo, from the collections of the York County History Center, is a view from near the same intersection; also looking west. The photo shows the wholesale leaf tobacco warehouse, which once stood on the southwest corner of North Beaver Street and North Street; on the spot of the left structure, in the rendering of the planned building. 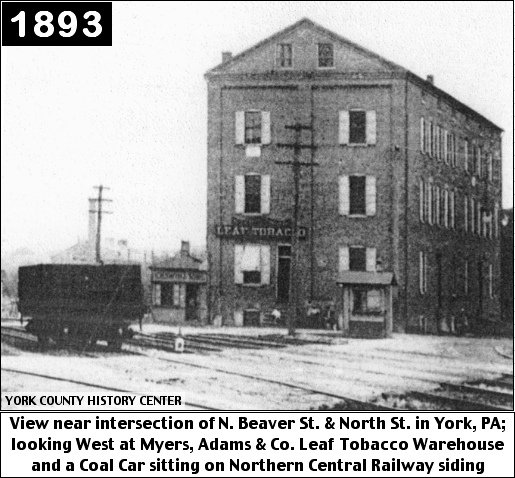 Myers, Adams & Company imported leaf tobacco into this warehouse and sold it to many of the cigar factories operating in York County. This was one of four cigar related businesses in which Edwin B. Myers was involved. Edwin extensively modified a Springettsbury Township farmhouse in 1901, creating the Meadowbrook Mansion as a summer retreat on his rural estate, covering 458-acres. That mansion still stands, now housing Christmas Tree Hill along Whiteford Road, across from the Galleria Mall.

I’ve used blue shading to highlight Myers cigar factory, at 209 North Beaver Street, in the lower right of the following section of the 1903 Atlas of York, PA by Fred’k B. Roe. In the upper part, along North Street, the leaf tobacco warehouse is also shaded blue. 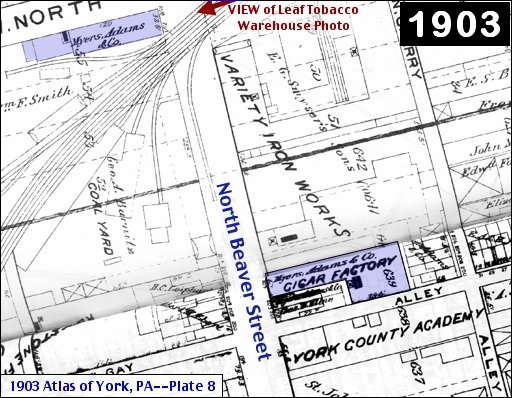 From the outset of rail service to York in 1838, the Innovation District section of the Northwest Triangle was first and foremost where a host of coal dealers set-up their coal yards. The following section of a 1908 Sanborn First Insurance Map points out the locations of four coal yard operations that existed in 1908; those of: Western Maryland Railway, Smyser & Senft, Geo. A. Barnitz, and L. E. Smyser & Son. 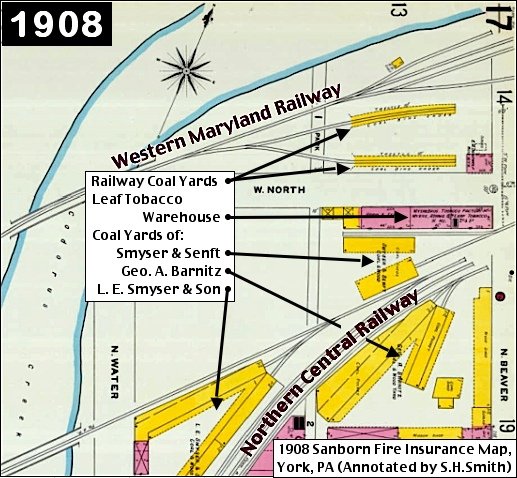 The view of the following 1931 aerial photo is to the southeast. It shows a section of the Northwest Triangle at the bottom of the photo. For easier orientation, I’ve annotated the location of several streets. I’ve also pointed out location of the leaf tobacco warehouse, coal yard remains, and Variety Iron Works; which has been repurposed as York Academy Charter School. 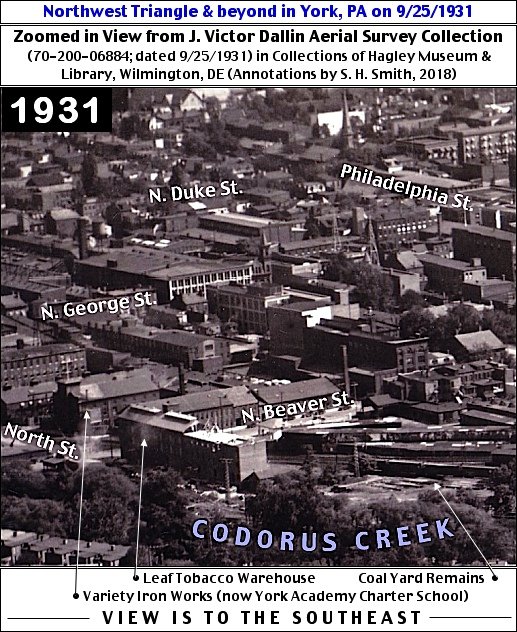 My older Aunts and Uncles, who grew up in the city, always talked about the big beautiful weeping willow trees that lined the banks of the Codorus Creek. The Codorus is definitely lined with massive trees in this 1931 photo. They claimed walking creek-side trails was like being out in the countryside. Of course that was before the 1933 flood, which uprooted many of the trees. The remaining trees were taken down a few years later when the Army Corps of Engineers put in the embankments.