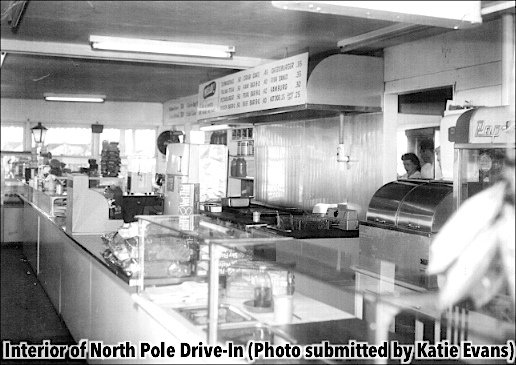 A query from Katie Evans resulted in a flurry of e-mails leading to submission of historic photos of the North Pole Drive-In and The FLORIDA ROOM in Springettsbury Township. These popular establishments were located at the southeast corner of North Sherman Street and Whiteford Road during the 1950s and 1960s. This photo shows the interior of the North Pole Drive-In; particularly known from their Subs, fresh cut French Fries and Chocolate Milk Shakes.

Katie’s father was among a large group of employees transferred to the AMF York Plant in 1964 and worked there until starting his own business in North Carolina during 1972. During that time he was an industrial engineer on Ski-Daddler, Transporters for NASA, and Automatic Pinspotter product lines.

The initial query from Katie referenced a post, which noted my visit to the AMF York Plant during the time her father worked with the Automatic Pinspotter production line. Quoting that paragraph from my 2015 post:

“In 1971, part of my Engineering Course studies at Penn State included ‘Inspection Trips’ to industry. The two plants that I visited in York County were Brunner Island Steam Electric Station and AMF York. The AMF engineer, taking us around the plant, worked on Pinspotter production. Seeing those machines being built make one appreciate the innovation that went into that design. The York Plant of AMF produced 37,000 Automatic Pinspotters from 1970 through 1973.”

Katie Evans inquired if I saved any handouts from that visit and wondered if the tour guide might have been her father. In the e-mail exchanges, I learned Katie’s parents were big fans of the FLORIDA ROOM; located next to the North Pole Drive-In. Her mother was an acquaintance of Janetta Botterbusch; who often played the organ, providing background music and taking requests.

Katie noted she occasionally worked a second job, part-time, at the FLORIDA ROOM during special and weekend events, and a younger sister worked at the North Pole Drive-In during two summer breaks. This post includes a few of the photos submitted by Katie Evans.

This postcard shows one of the two bars in the FLORIDA ROOM; decorated in the space age style of the 1960s. Besides drinks, hot and cold sandwiches were the typical fare for lunch. In the evening, steaks and cocktails were their specialty; followed by entertainment and dancing until 1:00 or 2:00 AM.

The FLORIDA ROOM opened for business during February of 1961. In November of 1968, the business closed; to make way for the construction of Route 30.

The entrance side of The FLORIDA ROOM faced the North Pole Drive-In. The outdoor pool is located on the other side of the fence; which is south of the building. The pool patio nearly extended to 11th Avenue. Katie thought several real and several artificial palm trees were in front and in the pool area during the 1961 through 1968 run.

This is a southeastward view of the FLORIDA ROOM outdoor pool. From late spring to early fall groups could rent out this area. Other times this area became an outdoor café, where customers could have food and drinks served at umbrella-shaded tables set up around the pool deck.

Following my 2014 post about Ernie McCall and the North Pole Drive-In, I received several widely varying opinions on the location of the FLORIDA ROOM and the pool with respect to the North Pole Drive-In. I satisfied doubters with a survey discovered at the Recorder of Deeds Office, drawn up for Pennsylvania Department of Highways in the taking of McCall’s commercial property to allow the start of construction of Route 30 in this area during 1969.

Using surveyors building placement on that survey, I’ve plotted the corresponding location of North Pole Drive-In, FLORIDA ROOM and pool on a present aerial photo. The locations of the through-1968, two-lane North Sherman Street and Whiteford Road are shown in yellow. Parts of the concrete pool deck remain and the pool was simply filled in; those remnants can still be seen along 11th Avenue.

Ernie McCall and his wife Ethel were co-owners and co-operators of both The FLORIDA ROOM and the North Pole Drive-In. This photo of them appeared in a brochure printed about the time the FLORIDA ROOM opened in 1961.