Last month, at the end of a post, Jim McClure wrote about a Cliff Satterthwaite drawing of a drawbridge crossing the railroad tracks at North Penn Street in York; a predecessor of a footbridge that crosses the tracks today.  Cliff believed there might have been a manual mechanism to raise the bridge for times when a high load passed underneath.

The “manual mechanism” was a crew of Pennsylvania Railroad workmen using railroad jacks and muscle power to raise the bridge surface.  My Dad, Harold L. Smith, was in one of those crews.  Dad’s Pennsylvania Railroad Time Log Book noted Penn Street Bridge eight dates during the time he worked for the railroad; all in the years 1940 and 1941.  I finally got around to checking those dates.  The October 11th, 1940 entry was the singular one resulting in pictures within the newspaper microfilms of the York County Heritage Trust. 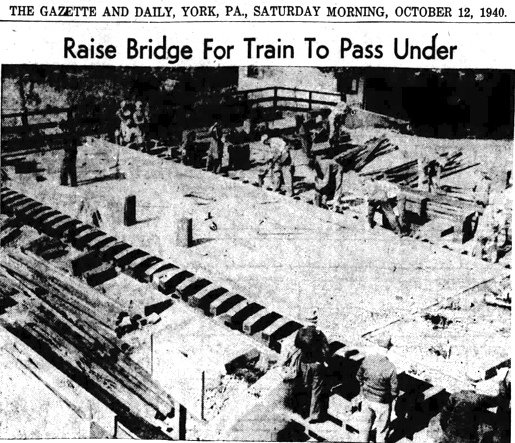 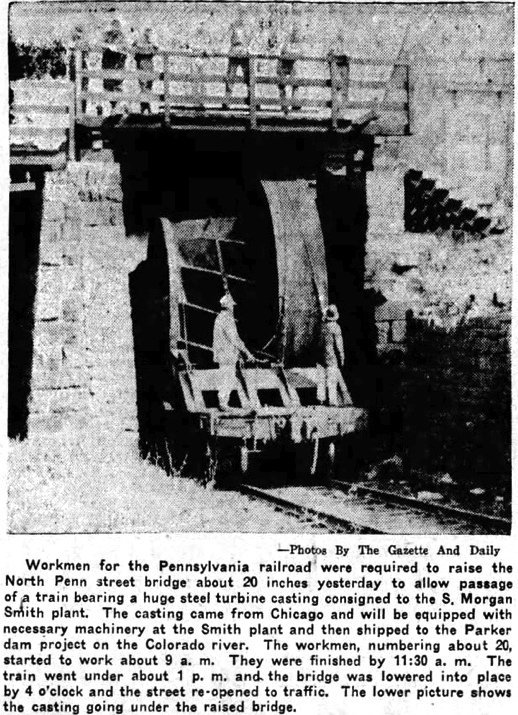 Here is easier-to-read text from the picture caption in the October 12th, 1940 issue of The Gazette and Daily:

Workmen for the Pennsylvania railroad were required to raise the North Penn street bridge about 20 inches yesterday to allow passage of a train bearing a huge steel turbine casting consigned to the S. Morgan Smith plant.  The casting came from Chicago and will be equipped with necessary machinery at the Smith plant and then shipped to the Parker dam project on the Colorado river.  The workmen, numbering about 20, started to work about 9 a. m.  They were finished by 11:30 a. m.  The train went under about 1 p. m. and the bridge was lowered into place by 4 o’clock and the street re-opened to traffic.  The lower picture shows the casting going under the raised bridge.

Dad went along with me to many Penn State Football games during the 1980s.  We usually stopped at a restaurant half way home.  On one occasion, while waiting in line, Dad happened to see a buddy that worked with him on the Pennsylvania Railroad.  We ended up joining their group for a supper filled with railroad stories.  Until Jim McClure’s recent post, that supper was the sole time I heard the story about raising the Penn Street bridge.  The workmen always gave the foreman a hard time for standing on the bridge deck as the crew went back and forth raising and blocking each side a few inches at a time.

After Dad died in 1992, I discovered his Pennsylvania Railroad Time Log Book (he worked for the P.R.R. from July 5, 1934 to February 1, 1943).  I previously used the logbook for the post Guess the Time Required to Paint an INCREDIBLY Long Bridge.

The logbook showed that from April 22, 1941 to June 30, 1941, working 8 hours a day, and six days a week, Dad’s sole job was at the Wrightsville Railroad Bridge.  That provided the details when Dad and another man painted all the steelwork, end to end, on the Susquehanna River railroad bridge between Wrightsville and Columbia.  Besides the paint, they were armed with little more then some paintbrushes, some rope and planks of wood.