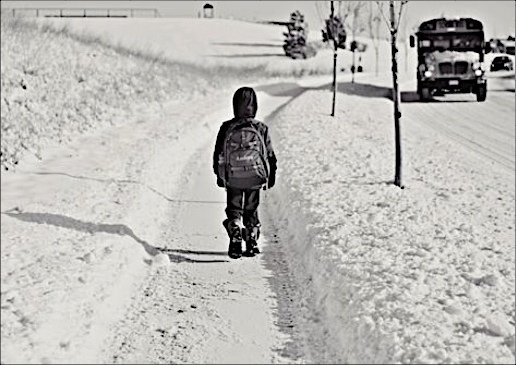 A rural walk to school in the winter is depicted in this view. The photo has the appearance of a student walking uphill to North Hills Junior High School or returning home from North Hills Elementary School; after sidewalks were installed to the west side of North Hills Road in the 1980s. (Pinterest photo)
Posted by Stephen H. SmithJanuary 16, 2022January 17, 2022 All Posts, Buildings, Pennsylvania, Roads, Schools, Springettsbury Township, York County4 Comments

How far did you walk to school, or to your school bus stop? Do you have memorable walks to school; especially in the snow, or during other bad weather? In this post, I’ll share my reminiscences of walking to North Hills Elementary School, beginning in the late 1950s.

In January of 1958, or family moved to 1644 Ridgewood Road; after being displaced from our South Queen Street home, with the construction of I-83. The portal through which we moved into the Central York School District was the single-lane North Hills Road railroad underpass. Continuing the journey to our new home, we then passed my new school, on the northwest corner of Whiteford Road and North Hills Road.

I was required to walk 5/8-mile to and from North Hills Elementary School. At the time, in the Central York School District, if a student lived within 3/4-mile of a school, they walked.

Walking along North Hills Road following a snowstorm was a learning experience, taught by the older students making the walk. If sidewalks had been in place, those walks would have been easy; just like the lead photo in this post. However, North Hills Road was like most rural roads at that time; no sidewalks.

If traffic, going in opposite directions, is going to pass where one is located along North Hills Road, you temporarily step off the road into the yard or field. And if the plowed snow is piled up deep enough along the road, one can count on getting snow in your boots.

On several occasions where snow started falling during a school day, in the walk home, if cars were having trouble getting up the hill; we’d walk through the Ruppert farm fields. This was not too bad with light snow on the ground, however walking through residual snow pack on farm fields the remainder of the way home was tiring for an 8-year-old.

In the 1980’s, sidewalks were installed along the west side of North Hills Road, to allow students to walk safely to North Hills Elementary School and to Central York Middle School. The Middle School was initially named North Hills Junior High School.

Among the things learned from the neighborhood children during the walks to and from North Hills Elementary School, was the location of semi-organized snowball fights, of which I was invited to participate. I wrote about those in my SNOW WARS post.

The following southward looking aerial photo shows North Hills Road, in Springettsbury Township, between Whiteford Road and Ridgewood Road. This photo appeared in The York Dispatch of October 13, 1960; with a caption noting the Junior High School is 65% completed. The Dave Allen aerial photo is dated October 7, 1960, and is from the Archives of the Springettsbury Township Historic Preservation Committee.

When our family moved to 1644 Ridgewood road during January of 1958, the fields of Paul Ruppert’s farm behind our house, allowed a nice panoramic view of the York Valley. Those views did not last long, as the Central York School Board purchased the upper part of the Ruppert farm during July of 1959 to build a Junior High School. The earthmoving began near the end of 1959 to level the site. For a while, it was difficult to avoid the mix of mud, with rain or snow, which constantly collected along North Hills Road, as we walked to and from North Hills Elementary School.

North Hills Junior High School opened on April 24, 1961; when students in the 7th and 8th grades were transferred from Central High School. After that time, there was a mix of Elementary and Junior High students walking in opposite directions along North Hills Road.

At the start of the 1961-1962 school year the initial Junior High students advanced to the 8th and 9th grades and a new 7th grade class entered the Junior High from elementary schools in the district; thus marking the first school year with the three grades planned for the Junior High. As far as my walking to North Hills Junior High School, it was the shortest walk possible, since our back yard adjoined the school property.

The Central York School Board selected the site for North Hills Elementary School in 1955 due to the rapid growth of the North Hills Development, located along the east side of North Hills Road. That development was initially projected to expand into the fields further east, compared to its present boundaries. The planned connecting road, Argyle Drive, to such an expansion still empties into a 33-acre undeveloped property; however Wellspan Properties purchased that site in 2008, thus it is doubtful more housing will ever occupy that site.

North Hills Elementary School, at the corner of Whiteford Road and North Hills Road, opened on September 4, 1957. The following photo appeared in The Gazette and Daily of September 7, 1957; with a caption noting the 12-classroom building was built at a cost of about $425,000; to accommodate 360 pupils. This school building has since been expanded several times. The same style of school building was also built in Hayshire during the same time period.

The following aerial photo, dated October 11, 1959, shows Whiteford Road, looking eastward from North Hills Road. I use it to illustrate an event that happened while I attended that school. Note at that time, a wide sidewalk extended on the school property all along the two-lane Whiteford Road. The sidewalk along that section of Whiteford Road was later removed to aid in creating the increased road width necessary to construct the four-lane Route 30.

On Friday September 16, 1960, while campaigning in Central Pennsylvania, John F. Kennedy stopped for lunch at the Lincoln Woods Inn, located across from the Food Fair in the York County Shopping Center. Afterwards, Kennedy’s motorcade proceeded along Memory Lane, then west on the two-lane Whiteford Road, which becomes Arsenal Road, past the Naval Ordnance Plant; before the motorcade arrived at the York Fairgrounds for campaign stops.

That day I was in 5th grade at North Hills Elementary School. The teachers had all the students line up single file on the sidewalk along the Whiteford Road side of the school grounds to wave as the Kennedy motorcade passed by. I wrote about that in a 2013 post and in a 2016 post; hoping someone had a photo of the long line of schoolchildren as the motorcade passed by. So far, all I have is a list of former North Hills Elementary students that want a copy, if that photo ever surfaces.

4 comments on “Reminiscences of Walking to North Hills School”