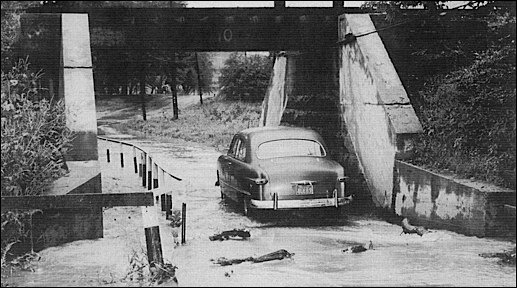 Through 1960, North Hills Road in Springettsbury Township was reduced to a single lane of traffic as it shared the railroad underpass with Three-Mile Run. In this 1952 view, the car is traveling north; with Three-Mile Run located at the west side of the underpass.

In 1960, the North Hills Road underpass and approaches were filled in to create a railroad grade crossing for two-lanes of traffic. Over the weekend the railroad grade crossing was widened to accommodate four-lanes. The following northward photo shows that construction in progress on June 15, 2019. The Railroad Construction Company had just finished placing the concrete base sections; seen as the white line across the photo, in which the rails are yet to be installed.

When our family moved from York Township into Springettsbury Township in January of 1958, this underpass was the portal through which we traveled; our new home was up the hill, where North Hills Road intersected Ridgewood Road. The following wider northward view of the underpass is from August 1959. The industrial buildings, to the left, were torn down to build the Rutter’s, now at that location.

On August 3, 1959, the Pennsylvania Public Utility Commission authorized the abolition of the North Hills Road underpass. It would be replaced with a protected grade crossing and new concrete culvert under the railroad tracks 900-feet east of the intersection to divert Three-Mile Run into the existing York-Shipley Storm Drainage ditch. Three-Mile Run flows west; draining into Mill Creek. A historic aerial photo of September 5, 1957 has been annotated to show the area surrounding the North Hills Road underpass.

On November 10, 1960 the new railroad grade crossing opened on North Hills Road. That crossing upgrade allowed construction to move forward on the final section of Industrial Highway between Memory Lane and North Hills Road; which opened on September 20, 1962.

Here is a full view of the introductory photo, showing the well remembered and often flooded North Hills Road underpass. Click on this LINK for a yorkblog.com Full View of the photos in this post.

Industrial Highway opening detailed at end of this post