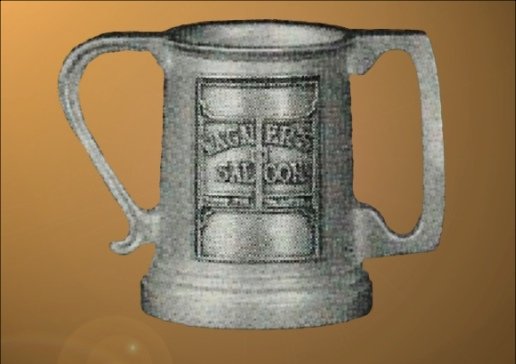 Wagner's Saloon crest appears on a “Kissing Noggin” containing his and her's handles; to make it easy to pass the mug back and forth between two people. During the 1950s and 1960s, Wagner's Saloon was the downstairs bar at Wagner's Diner on the Lincoln Highway, one-half mile east of Hallam. (The Noggin photo is from 1963 publication pages submitted by Joe Spagnolo; Enlarged and enhanced by S.H. Smith, 2021)
Posted by Stephen H. SmithFebruary 11, 2021September 13, 2021 All Posts, Buildings, Businesses, Family Histories, Lancaster County, Manufacturing, Pennsylvania, Restaurants, Roads, Springettsbury Township, Various Locations, York County

Joe Spagnolo shared some fascinating early history about the 1960s Wagner’s Diner, located along the Lincoln Highway, east of Hellam. A 1963 publication contains a photo of the downstairs bar, with the caption: “Wagner’s Saloon, run by John Wagner in Hellam, Pa., is the home of the country’s first Noggin Club.” These clubs quickly spread across North America. They owed their name and popularity to characteristics of Noggin beer mugs, produced with the proprietary, aluminum-based alloy metal, Armetale, developed in 1963 by Ralph P. (Bud) Wilton, Jr.

Mug clubs certainly existed at bars prior to 1963. Some of those earlier mug clubs may have utilized pewter mugs. Armetale is not Pewter, it only has a pewter appearance. Less than 60-years old, Armetale is a relatively new, non-toxic aluminum-based alloy metal; i.e. it is safe to eat and drink from. Pewter goes back centuries and until fifty years ago, it contained a large lead content. People that frequently ate from pewter, occasionally died from pewter poisoning; which we now know, was caused by the lead leaching out. Hence the 1974 mandate for the removal of lead in any new pewter produced.

Noggin beer mugs, cast from Wilton’s Armetale, and the resulting Noggin Clubs were one of the earliest Armetale marketing promotions of Wilton Brass Company. Among those Noggin Clubs, the first in America was located at Wagner’s Saloon in Hellam Township, York County, PA.

Joe Spagnolo is the owner the Red Rose Restaurant & Lounge, at 5370 Lincoln Highway East; a business which operates in the building originally housing Wagner’s Diner and Wagner’s Saloon. Joe has heard a few stories from older guests who worked at the long ago Go-Kart track behind the diner or just remember the old bar. But most of it is pretty vague. He finds it all very intriguing, especially since his family has owned the establishment since 1991, when he was 15-years-old.

Joe shared pages from the publication with the old photo of Wagner’s Saloon, along with a few historical and present photos of the bar. He posed some neat questions, which continue to be researched and will be answered in a two-part series of YorksPast posts.

The date of the old publication was in question, until a John Wagner interview was discovered. The interview appeared in the York Dispatch, issue of July 31, 1986, as John explained a unique feature of his early Hellam Township bar:

“In 1963, about 600 metal mugs dangled from hooks on the ceiling behind the bar. Each one was personalized in black marker at the bottom. For about $4, says Wagner, a person could purchase a noggin that would always remain in the bar. When the person returned, they were welcomed with their own mug, frosty and cold. This was the ‘noggin club’ and it kept members coming back to drink their beer in a homey atmosphere. According to an old publication, in 1963 put out by a now-defunct beer company, a noggin club is an unorganized group of beer drinkers and it continues, Wagner’s saloon will be known as the home of the first noggin club.”

The 1963 publication notes Noggins are available in the three types shown here: traditional, colonial, and the ‘kissing noggin’ with his and her’s handles; to make it easy to pass the mug back and forth between two people. The upper “kissing noggin” contains the Wagner’s Saloon crest; which is enlarged at beginning of this post.

It might not be a coincidence that Wagner’s Saloon became the first to receive the Noggin beer mugs in 1963. Here are a few reasons why: First is the proximity; Wagner’s Saloon is located 5-miles from the Wilton Brass Company foundry, located at 18th and Franklin Streets in Columbia, PA; where the Noggin beer mugs were produced. Second, the creator of Armetale, Bud Wilton, lived even closer to Wagner’s Saloon; he lived along South 4th Street in Wrightsville, for all but the last few years of his adult life. Third; there are tales of Bud Wilton having some sort of business association with John Wagner. That associate is still being researched. Bud may have been anything from part owner of Wagner’s to simply a supplier. However articles delving into the genesis of Wilton’s Armetale alloy often point out foundry-man Bud Wilton was also in the restaurant business at the time Armetale was developed.

As the most recent example, I’ll quote a few sentences from an article in the August/September 2013 issue of Tableware Today, by Amy Stavis: “The genesis of the Armetale alloy is practically legend. By 1963, Bud Wilton was running his family’s foundry, Wilton Brass, in verdant Lancaster County in the heart of Pennsylvania Dutch Country, but he was also a restaurateur in the market for old-world-styled pewter serve-ware. After extensive R&D, Wilton created a comely concoction tough enough to withstand the rigors of restaurant use.”

From its widespread introduction in 1963, all authentic Armetale items are marked with the registered trademark RWP inside a circle, with the W usually larger than the R and P. The initials are for its creator Ralph P. Wilton, Jr.; however better known as Bud Wilton to his friends. Interestingly the U.S. Trademark Application for RWP, indicates the mark was first used on a product December 1, 1962; indicating Bud immediately recognized the uniqueness and marketability of the ten-metal, aluminum-based alloy he had formulated.

Ralph Preston Wilton, Jr. was born in Wrightsville, York County during 1917. He graduated from the York Collegiate Institute, Class of 1936. On January 3, 1942, he married Louise C. Strauss at Advent Lutheran Church, 1775 East Market Street, in Springettsbury Township. At the time of the wedding, Ralph Wilton, Jr. is President of the Susquehanna Casting Company, having succeeded his father, and Manager of Wilton Products, Inc., where he had worked since it was founding in 1935; both businesses located in Wrightsville. Following their wedding, the couple lived in Wrightsville at 4th and Hellam Streets; southeast corner. Ralph Wilton, Jr. enlisted during WWII; he served in the Army from May 29, 1942 until June 13, 1946, when discharged as a First Lieutenant.

In 1953, Ralph Wilton, Jr. is elected to the York Junior College Board of Trustees. From the announcement, at that time, he is President of Wilton Products, Inc.; Vice President of Wilton Brass Company in Columbia, and Vice President of the Susquehanna Casting Company. Wilton Brass Company, established in January of 1953, was the collaboration between Frederick M. Wilton and his nephew, Ralph P. Wilton, Jr. Wilton Brass foundry was established to manufacture and market castings of brass and other metals; as opposed to the other Wilton family foundries, which primarily dealt in casting iron.

In 1963, Wilton Brass Company markets the first products produced with Armetale. These products have the look and feel of pewter but are more resilient; i.e. do not crack, chip or tarnish. Armetale also possesses enhanced thermal storage properties, such that cold food or beverages stay cold longer and hot food or beverages stay hot longer; when compared to similar food service products.

The Noggin beer mug was one of the earliest Armetale marketing promotions by Wilton Brass Company. Quoting the 1963 publication, which appears to use a few paragraphs provided directly by the Wilton Brass Company marketing group: “This, however, is no ordinary mug. It’s shaped like a mug—sturdy, and dependable. It is made of an alloy that looks like pewter—silver gray, thin, pleasant to look at and pleasant to lift. It won’t break, chip or change color. Dip it in ice water for 10 seconds, and it will hold its cold for up to 2 hours.”

“Here’s how you organize a Noggin Club. The owner of a restaurant purchases a quantity of Noggins at $3 each and hangs them in rows on his back bar or over his bar. He sells a Noggin to a customer at cost, below cost, or at a profit. The customer writes his name on the bottom with a magic ink pen, the bartender gives the Noggin a number, and the Noggin then remains in the tap room for that customer to use each time he comes in. When two or more customers have their own personalized Noggins hanging permanently at the bar, a Noggin Club has been born. Once started, it grows by itself. Members are, of course, issued membership cards that carry the number of the Noggin as well as the customer’s name.”

“A unique feature of the Noggin Club is the crest on the side of the Noggin itself. If a bar orders 50 or more Noggins, they can have their own crest permanently molded on each Noggin. If less than 50 are ordered, stock crests are available.”

“The Noggin Club offers a number of advantages for bar owners. It presents a unique way to hold customers and keep them coming back. It attracts new customers. The Noggins add an attractive décor to the tap room. They help bartenders to remember customers’ names. And if sold to take out, the recommended price is $6, affording the bar a neat $3 profit.”

With Wilton Brass Company experiencing great success with their Armetale products, in 1966 the Susquehanna Casting Company foundry in Wrightsville was put under the control of the Wilton Brass Company in Columbia. After which both foundries produced Armetale products, with the maker mark moniker: Wilton Columbia PA USA. The Wilton Armetale organization eventually consolidates in Mount Joy, Lancaster County. In 1886, Ralph P. Wilton, Jr. died at the age of 69. He is buried in Fairview Cemetery in Wrightsville, York County, PA.

The following is a circa 1970 photo of Bud Boyer behind the bar in the tap room, which was originally Wagner’s Saloon. Bud acquired the establishment from John Wagner in 1967, and renamed the downstairs bar Bud Boyer’s Rathskeller. He continued the Noggin Club promotion.

It was in 1950 that John Wagner obtained a liquor license and opened Wagner’s Saloon in the basement of Wagner’s Diner. Since that time, the establishment has operated as: Bud Boyer’s Rathskeller, Phase III Ltd., The Dock, Oliver’s, and Your Place Restaurant, prior to the present Red Rose Restaurant & Lounge for the past 30-years.

Please consider sharing history or memorabilia with the Red Rose Restaurant & Lounge, at 5370 Lincoln Highway East. Joe Spagnolo is interested in potentially reopening the bar downstairs; while paying homage to its past. If anybody has old photos, or a Noggin beer mug with the Wagner’s Saloon or Boyer’s Rathskeller crest; they would be neat additions.

Lincoln Woods Inn medallions are made by Wilton Armetale