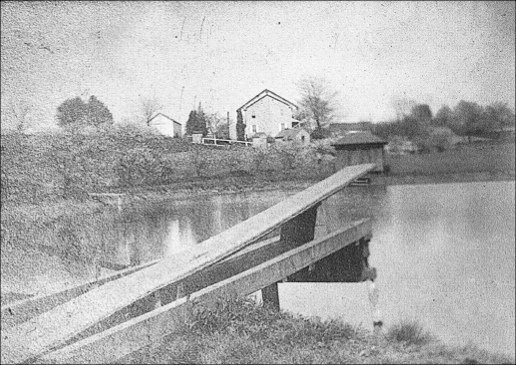 Chuck Letocha submitted an old photo only labeled “Niles Pond” and inquired if I knew anything about it. A little research revealed it was near Baumgardner’s Woods in Spring Garden Township. Maybe someone has an interesting story or comment about the pictured springboard.

A Newspapers.com search for Niles Pond has it listed on several published church schedules during 1927 for the Gospel Herald Mission Society at 240-244 East Princess Street in York.

An article in The York Dispatch of April 11, 1927, provided the clue on the location of Niles Pond. Quoting that article in its entirety: “Baptismal services were held by the Gospel Herald Mission society at the pond on the Michael S. Niles home, south of Baumgardner’s woods, yesterday afternoon when 11 candidates were immersed by the pastor, the Rev. E. H. Musselman, after a preliminary examination in the principles of Christian faith.”

“The service began at 2:45 o’clock and lasted until 5:25. The service was impressive consisting of singing by the large audience and prayer by the pastor who spoke on I Peter iii: 14-22. While the candidates were led out in the middle of the pond by the preacher and immersed in the name of the Lord Jesus, the audience joined in singing a number of hymns. The benediction by the pastor brought the service to a close. Another service of this nature will be held next Sunday afternoon at the same place.”

The following aerial photo shows the area south of Baumgardner’s Woods in Spring Garden Township, York County, PA. I originally indicated Niles Pond could be located near the headwaters of Poor House Run; however incorrectly assumed that location in the following illustration. Several of my readers correctly located the pond, as described and shown in the post: Bupp’s Pond becomes Niles Pond in 1926.

When standing at 663 Greendale Road and looking northwest, the landscape does correspond to that in the submitted photo. The farmhouse in the photo would be located along what is now named Old Farm Lane.

Michael S. Niles [1887-1931] was a York Attorney. He was the only child of Judge Henry C. Niles [1858-1939] and Lillie Schall Niles [1860-1946]. The neighboring Hillcroft was developed on the former estate of Judge and Mrs. H. C. Niles; their home on that estate is now 354 Pine Lane. Henry C. Niles also served as President of the Keystone Farm Machine Company, which operated over most of the Northwest triangle in York; plus he was counsel and director of the Maryland & Pennsylvania Railroad Company