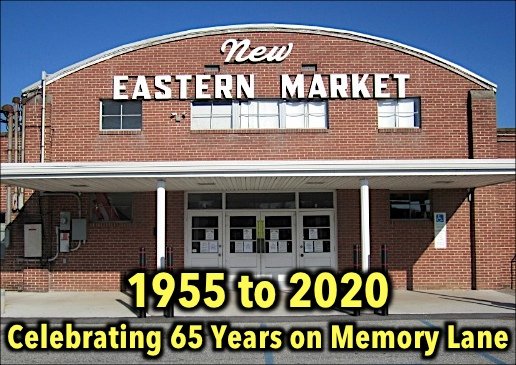 Just as on all market days in the COVID-19 era, masks are required by everyone in the market house, strive to keep 6-feet social distancing, and no handling of any products; the market vendors will show the product to you if you so desire. The complete COVID-19 guidelines are posted on the market doors.

The origins of a market house east of York began in the law offices of C. B. Wallace on November 30, 1885, where a committee was appointed to select the site. George Prowell’s 1907 History of York County (Vol. 1, page 796) notes the early history of Eastern Market: “A site was purchased on East Market Street, near the railroad, and [in 1886] a brick building was erected at a cost of $11,875. This substantial building was blown down during a violent storm, which swept over York on January 9, 1889. Soon afterward the second market house was built on the same site at a cost of $4,500. The bricks and some of the timber of the demolished building were utilized.”

The market stand renters in the 1889 Eastern Market building served the public, at 480 East Market Street, until Friday January 31, 1947. After which the farmers had to find a new market location due to Sears, Roebuck and Company purchasing the building for conversion to a farm store. That Sears store stocked a complete array of farm needs, ranging from feeds to building materials and heavy farm machinery.

One would think the farmers, that tended market in the 1889 Eastern Market building, would not be happy with Sears. However beforehand, Sears had a hand in making sure the market stand renters had a new site, which was virtually right across the street; in the basement of the White Rose Arena. The New Eastern Market opened the following Friday on February 7, 1947, with bigger crowds of customers. And the large crowds continued at New Eastern Market; often touted due to the abundant free parking for hundreds of vehicles in an adjacent lot off of Philadelphia Street; as shown in the following ad placed by Sears.

The New Eastern Market in the basement of the White Rose Arena thrived until fire destroyed that building Sunday night December 13, 1953. A group of farmers, which rented space in that building, decided farmers should control the ownership of a replacement market building, and the new site should have abundant free parking.

Architect Jack Spots was retained to design a 120-foot by 300-foot market house. On April 22, 1955, three adjoining tracts of land were purchased for $78,000. The site was located along the east side of Memory Lane, in Springettsbury Township. Days later, on April 28, 1955, the ground-breaking was held. In the photo, Spencer E. Henry, President of the New Eastern Market Company, Inc. wields the shovel as 11 directors of the organization look on.

The above photo shows construction progress, as of September 23, 1955. The 36,000-square foot market house design features the arched laminated rafter roof, with two side wings.

The end of September saw enough applications to fill all space in the building and by early November, wait-list applications reached a level to fill another building of the same size. The following photo shows finishing touches being put on the market stands; two-weeks prior to opening of the New Eastern Market. This is just before stand holders were allowed to customize their stall space, if so desired.

Friday November 18, 1955, marked the grand opening of New Eastern Market at 201 Memory Lane in Springettsbury Township. Door prizes, free bus service from the square, and free parking were highlighted in opening day ads; which listed 117 stand holders (see full list at end of this post). During the early years, market was held every Tuesday and Friday from 3 p.m. to 10 p.m.

When our family moved from York Township into Springettsbury Township in January of 1958, I was eight-years. Friday was grocery day for Mom, accompanied by four children, between four and eight-years-old, at that time. After getting groceries at Food Fair in the York County Shopping Center, we always made a stop to purchase fresh produce at Fitz Brothers stand in New Eastern Market, plus got some sort of treats; provided all of us had behaved.

Starting in the 1970s, almost every Friday, on the way home from work, I stopped at New Eastern Market. There was always a stop at Fitz Brothers for fresh celery. During the 50th Anniversary of the New Eastern Market in 2005, the following photo shows Marlin Fitz piling fresh celery at the Fitz Brothers Farm Fresh Produce stand. His father, Howard, started the family-owned stand when the market opened in 1955.

On all market visits, I’d always get a bag of fresh Martin’s Potato Chips from the couple that started it all; Harry and Fairy Martin. At their stand in the market, they’d always had huge bags of chips that were made the previous day, from which individual bags were filled. During the 50th Anniversary of the New Eastern Market in 2005, the following photo shows Fairy Martin scooping potato chips for a customer at her stand in New Eastern Market. Martin and her husband, Harry, established Martin’s Potato Chips Company in 1941 and kept this market stand; after selling the company to Ken and Sandy Potter in 1971. Fairy Martin lived to be 94-years-old.

The following photo, by Richard Zook in 2017, looks down the center aisle, towards Memory Lane end of New Eastern Market. At stands, regular customers make their purchase and have a little conversation; nearly always ending with “see you next week.”

The following photo shows the current New Eastern Market signage in front of the market house at 201 Memory Lane. It notes on Friday, November 13, 2020, from 7 a.m. to 6 p.m., the 65th Anniversary of this market house will be celebrated with drawings for prizes throughout the day.

Of all the Historic Property plaques displayed on buildings in Springettsbury Township, the method New Eastern Market used to display their plaque has to be the most impressive. Mounting the plaque on a piece of black polished marble is a nice touch to highlight pride in this historic building; as it continues to serve as an important market house in the community.

Links to a few other market house posts include:

J. E. Williams & Company in York; From near Central Market to Dauntless within the Carlisle Avenue Market House