Neat Photo of House on the Move 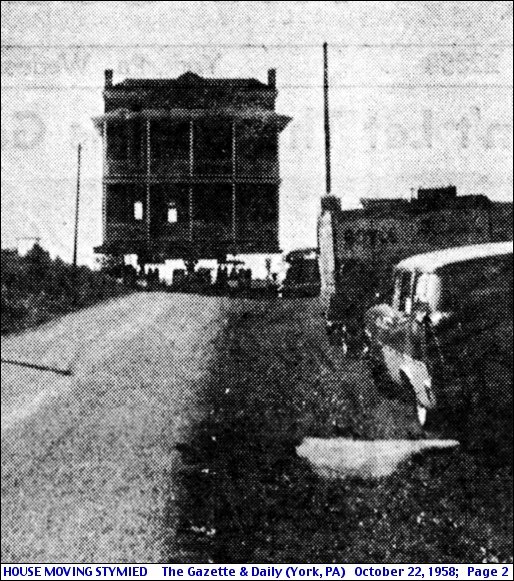 This photo by The Gazette and Daily appeared in the October 22, 1958, issue of that newspaper, and is from the newspaper microfilms at the York County Heritage Trust. “HOUSE MOVING STYMIED” is the caption of the photo.

The jest of that caption, “Because parked vehicles are in the way, the house shown above cannot be moved the remaining short distance to its new foundation. … Residents in the small, unnamed development where ranch-type homes predominate have opposed the presence of the house, which, they claim, will bring a depreciation in the value of their property. … When advised by their attorney, John R. Gailey, Jr., that the area has no zoning ordinance to prevent what they consider an intrusion, they parked their vehicles on their lawns to prevent the further advance of the brick dwelling.”

In the 1950s, moving a house was a common occurrence in York County. In 1958, this was one of four houses, within a few hundred feet of one another at that location, moved to new foundations rather than being demolished. That was the ultimate form of recycling; saving tons of building materials from ending up in landfills.

Into the later 1900s, it seems the country became an increasingly greater throw away society; which included throwing away old structures. Things started to change with separating recyclables from our trash, and at least on the west coast, several house-moving companies have created a new business model. They purchase old homes, slated for demolition, many times getting them for a dollar; then moving them at their own expense to a new foundation, selling the recycled houses for a profit. Maybe house recycling will spread to the east coast.

“From Primanti to Diner,” is my clue for pinpointing the location of the pictured house move. Continue reading to discover the location.

The house being moved originated as the homestead farmhouse of Charles W. Barshinger; being built about 1924 along South Queen Street in York Township. The photo shows the back porches of the house.

The farmhouse sat a few feet inside the right-of-way for the northbound on-ramp of I-83 and had to be demolished or moved during 1958. Its original location is pretty close to where the new Primanti Bros. Restaurant sits at 2151 South Queen Street.

I remember that farmhouse well; it sat right across the street from our house at 2150 South Queen Street; a house that was moved to 2117 Louise Avenue; at the end of Gateway Road. Our house took a path to its new foundation, similar to the path of the farmhouse; as marked up on the following northward looking 2015 Bing.com Birds Eye View. 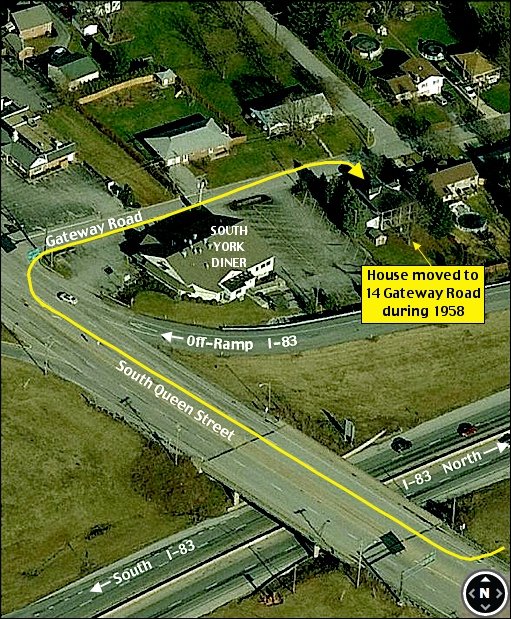 The photo from The Gazette and Daily, shows the farmhouse just after it made the turn from South Queen Street onto Gateway Road. It is waiting to move down the road and turn into the foundation built for it at 14 Gateway Road; now directly behind the South York Diner.