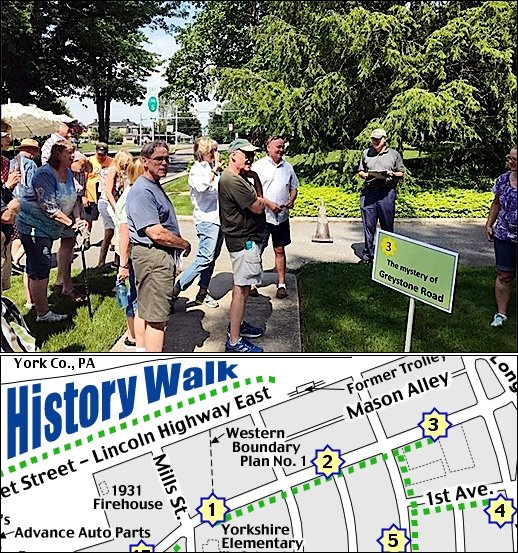 Neat Yorkshire details, by those that took part in the Yorkshire History Walk, will be incorporated into the scripts for a repeat of this walk during this fall or next spring. With respect to your questions about recent YorksPast posts; some technical difficulties have developed such that even though I can again put up posts, formatting and linking are still not available to me. Believe me when I tell you these problems have caused a lot of wasted time and frustration.

About forty took part in a walk through the Yorkshire community of Springettsbury Township on Saturday. Brenda Neff submitted this photo of the group gathering at Yorkshire history walk Stop 3; the Mystery of Greystone Road.

The mystery of Greystone Road involves that road segment between Eastern Boulevard and First Avenue; it was originally planned but never built. It was a reader of my Blog who raised the question; “it looks like a road was meant to pass through here, why didn’t it get built?” That question was relatively easily answered during the walk. However a more complex mystery evolved via comments and questions that emerged at the first stop of the walk.

The first stop on the history walk was placed along Eastern Boulevard, where it crossed the western boundary of the 70-acre Yorkshire Plan No. 1 drawn up by York Civil Engineer, Robert B. McKinnon in May of 1924. These 70-acres were once part of Edwin Myers massive 458-acre Meadowbrook estate. Edwin’s widow sold this piece of that estate to a Lancaster County farmer, Charles Bacon, in 1919; who continued to solely farm the land.

During May of 1924, Edna F. Dimmerling purchased that land from Mr. Bacon. This is the same Edna Dimmerling, who 5-months later sells the vast majority of the lots in the Yorkshire development to Mahlon Haines; one of several land purchases Mahlon made in the fall of 1924 to create his 318-acre Yorkshire Ranch.

Edna Dimmerling is consistently the only person listed in the earliest Yorkshire property transactions, where she is described as a single woman of York, York County, Pennsylvania. The United States Census tells me Edna was 38-years old in 1924. Directories of that time, indicate Edna was a secretary in a realtor’s office in York known as Diehl on the Square, that realtor appears as the sales agent in the first weeks of Yorkshire development advertising. However when a big Yorkshire lot sale was staged at the end of June of 1924, The Conrad Realty Company of Harrisonburg, Virginia, was the selling agent.

During the last big day of that sale, full-page local ads noted The Spring Garden Band would be giving a concert during the afternoon’s sale and a new Hudson automobile was to be given away. However based upon the low deed activity and not a mention by the local papers in the sale’s aftermath, it appears that sale was a flop.

Dimmerling is not a common York County name, as confirmed by the scarcity of that surname in family history files at the York County History Center. Edna’s father was Frank Dimmerling. Frank was discovered by matching his three children: Edna, Stella and Frank; as confirmed via Census records, with Frank Dimmerling’s obituary in the September 24, 1898 issue of the Evening Report, a Lebanon, PA newspaper. “Frank Dimmerling, who has been ill for about two years with liver troubles, died this morning at 4:30 o’clock at his home, 705 Walnut Street, this city [Lebanon, PA]. He was aged 39 years, a baker by trade, having followed that business for 13 years. He was a native of Pottsville, coming to this city six years ago. He conducted a bakery until the spring of 1897, when ill health came on. He was a member of St. Mary’s Catholic Church and is survived by his wife, Mrs. Mary and three children, Edna, Stella and Frank.”
It looks like Edna F. Dimmerling was likely born in Pottsville and moved to Lebanon with her family in 1892; the at age of 6 or 7. Edna then moved with her widowed mother and siblings to York after 1900, because in 1900 the family is still at 705 Walnut Street in Lebanon, per the 1900 Census. Edna’s mother, Mary Dimmerling, re-marries at least once to Joseph C. Grove and there is a connection to the Steininger family, possibly another husband of Mary. One possibility being examined is that a step-father of Edna could have been a backer to help finance the purchase, development and promotion of the initial 70-acres of Yorkshire development.

One of those promotions was a big three-day Yorkshire lot sale, staged June 26th, 27th and 28th of 1924. Initial advertising noted this about The Conrad Realty Company of Harrisonburg, Virginia, who was retained as the selling agent for the three-day Yorkshire lot auction: “This sale may not last three days. We sold 260 lots at ‘Hershey Heights’ on Saturday afternoon, May 24th in 2-1/2 hours in face of a heavy rain storm. What will happen at beautiful ‘Yorkshire’? We don’t know but we predict that these lots will not last but one day. We have 288 lots laid out on this sub-division.”

They did not have the “Hershey success” at Yorkshire. The sale lasted the full three days with the majority of the lots left unsold; this based upon the low deed activity and not a mention by the local papers in the sale’s aftermath. It appears that sale was a flop. I also failed to discover who, if anyone, won the Hudson automobile. Here is the full page advertisement for the third day of that sale, as it appeared in The Gazette and Daily on Saturday morning June 28, 1924. 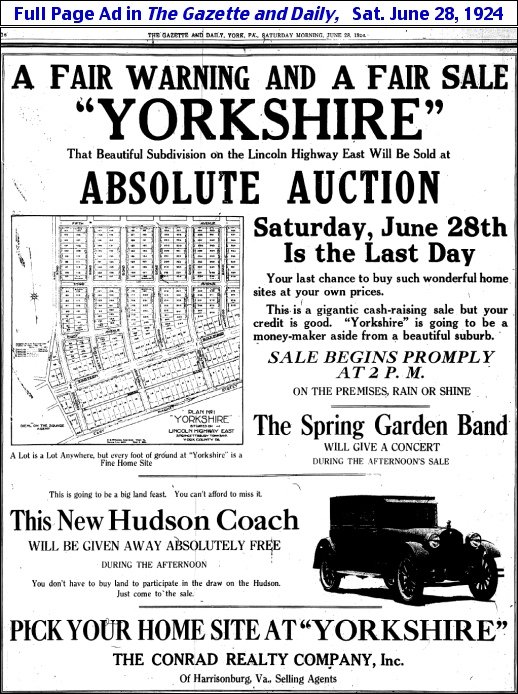