By 1922 the United States Treasury Department and Federal Reserve Banks had adopted vaults produced by the York Safe & Lock Company in York, PA as their standard.  This advertisement from the 1922 International Banking Directory also states “York safes and vaults have been installed successfully in banks in nearly every country throughout the world.”

Many State & Local governments also purchased York safes and vaults.  This neat comment from Tracy concerns the Vault produced by York Safe & Lock Company for the Commonwealth of Pennsylvania:

I am proud to work in one of York Safe and Lock Company’s finest achievements right here in PA.  Its construction was started in 1937, and completed (along with the building that houses it) in 1939. The main vault door weighs 60 tons and the entire vault consists of 400 tons of stainless steel.  It is one of only two of its kind in the world (the other being in China), and after 75 years, its safety features are still considered “state of the art”.  I am in awe of it every day, as is everyone who has the opportunity to visit.

It was originally built to house the state payroll, and was equipped with tear gas and other safety features too numerous to mention.  It truly is a work of art, and some elements of it’s design still baffle the technicians at Diebold who currently maintain it.

Years ago I remember reading about these ornate York Safe & Lock Company vaults, that I’m certain are the ones Tracy has commented about, but I can’t recall if the vault in the Pennsylvania Finance Building or its twin vault in China was produced first.  Comment if you can recall the article about these vaults.  Do any of my readers know which vault spawned the order for another “just-like-it”?

President Franklin D. Roosevelt promised the American people a New Deal in the depths of the Great Depression.  Many “New Deal” federally sponsored public works projects put millions of jobless Americans back to work.  The Pennsylvania Finance Building was one such project built via assistance provided by this program.

The 1939 book, “Public Buildings: A Survey of Architecture of Projects Constructed by Federal and Other Governmental Bodies Between the Years 1933 and 1939 with the Assistance of the Public Works Administration,” by C.W. Short and R. Stanley-Brown includes this comment about the Pennsylvania Finance Building:

The new Finance Department Building of the State capitol group at Harrisburg makes possible the gathering into one building of related units of the State government which were formerly widely scattered.  The monumental character of the structure and the use of stone for the entire exterior was dictated by its position opposite the Education Building at the northeast end of the Capitol Plaza.  It provides quarters for the departments of the auditor general, revenue, and State treasurer.  It has a volume of approximately 6,800,000 cubic feet and its estimated cost is $4,736,270. It is expected to be completed toward the close of 1939. 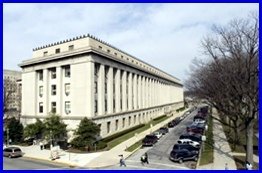 This is a photo of the Pennsylvania Finance Building from the Pennsylvania Department of General Services web site.  The view is standing at the back of the State Capitol Building, and looking towards the northeast.

In the Fall 2008 issue of Pennsylvania Heritage Magazine, a nice article by Michael J. O’Malley III was entitled: “Built By The New Deal.”  Quoting two paragraphs from this article:

Beginning in mid-1937, laborers and artisans toiled for two years on the six-story Finance Building.  An army of workers, similar to those organized by the Civilian Conservation Corps lived in temporary barracks just south of the construction site.  They represented but a fraction of the nearly one million unemployed Pennsylvanians—more than 20 percent of the workforce—who lost their jobs in the aftermath of the Great Depression.  They included unskilled laborers and accomplished craftsmen who, although paid only minimum wages and limited to thirty hours of work each week, were appreciative of the opportunity to earn a modest livelihood.  They completed the construction of the majestic building in 1939.

In addition to its distinctive decorations, the building contains advanced technological features that distinguished it at the time of its opening.  It was one of the first state office buildings installed with air conditioning, and its unusual revolving entrance doors earned accolades from an architectural magazine.  However, one of its most important components is one the public rarely—if ever—sees: an impregnable vault in which hundreds of millions of dollars in financial instruments, securities, bonds, and cash are safeguarded.  Even the doors to the vault room are decorative.