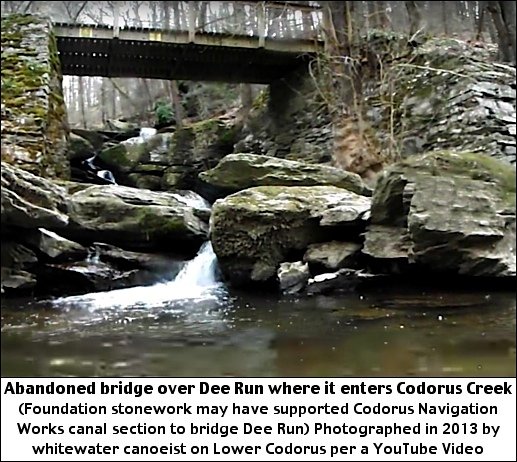 Recall in part 2 of this series, canal engineer Simeon Guilford’s design for the lower half of the Codorus Navigation Works was quoted in the newspapers of late 1829, as: “In the Narrows, between Brillinger’s mill and Codorus forge, four dams will have to be erected.” In part 11, the first of those dams was explored. Guilford noted, “The next three dams will overcome a fall of thirty-six feet, six inches.”

After the Codorus Creek passes Brillinger’s Mill (i.e. at Route 24) and heads downstream through the Narrows, the creek bed drops much steeper than upstream. The drop of the creek bed plus surrounding features, where the next three dams would have been located, suggests they were all approximately equal height.

The research for this post was extensive; including everything from the study of several similar early 1800s slackwater navigation works, to more recent Army Corps flood plain data on the Codorus, to very recent Lidar data. Dam 7 and Lock 9 placement, while utilizing a canal bridge over Dee Run, are the culmination of that research.

This 2013 photo shows an abandoned bridge over Dee Run, where it flows into Codorus Creek. The foundation stonework may have supported the elevated canal section between Dam 7 and Lock 9. Click on this LINK for a yorkblog.com Full View of the three original illustrations in this post if details are cut off in the cropping of the illustrations, or if any have been removed from the ydr.com site.

Aerial visualizations detailing the placement of Dam 7 and Lock 9 are provided following the links and index to the first eleven parts of this series: 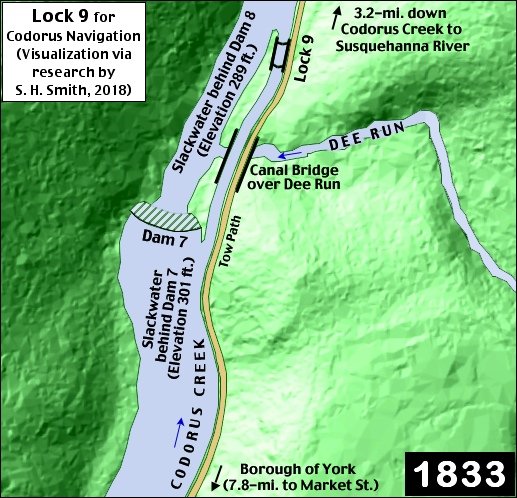 Lock 9, in the 1833 illustration, permits a canal boat to be lowered, or raised, a height of 12-feet. A canal section, extending downstream by Dam 7, is at the higher, 301-feet elevation, until reaching the lock which allows navigating between water elevations of 301-feet and 289-feet; the elevations of the slackwater pools on either side of Dam 7. That dam is located 7.8-miles, via the Codorus Creek, from the West Market Street landing of the Codorus Navigation Company, and located 3.2-miles from the Susquehanna River.

Dee Run flows into the Codorus Creek at a deep cut in the hillside. In fact, on earlier maps, it is labeled Deep Run; for example, see the 1876 map of Hellam Township. A canal, in the manner drawn, often bridges such a waterway. The supports for canal bridges are overly massive, due to the weight of the large volume of water on the bridge; which leads one to suspect the foundation stonework in the abandoned bridge at the mouth of Dee Run may have originally been built for the Codorus Navigation Works. 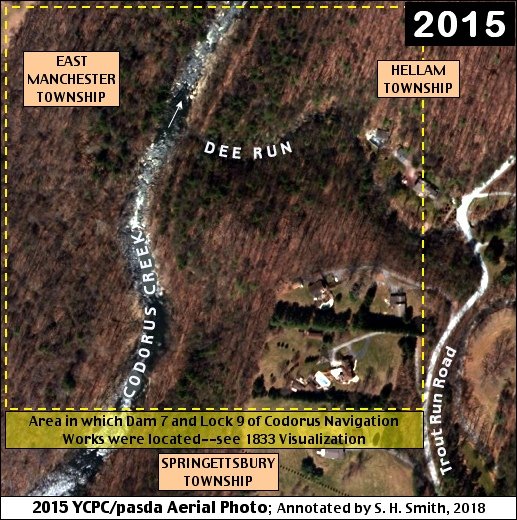