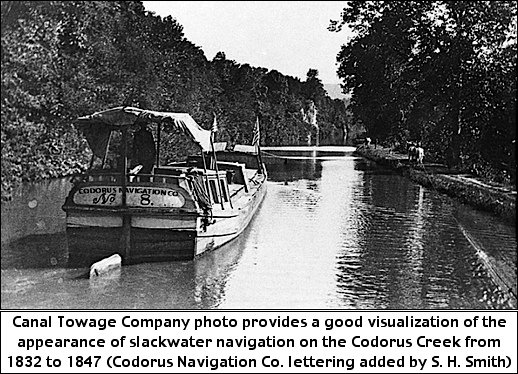 My presentation Codorus Navigation Works premiered earlier this week at the monthly meeting of the Manchester Township Historical Society. I’ll draw upon that talk, plus further research, as I continue the series of posts exploring the history of the Codorus Navigation Works. Completed in November of 1833, this canal allowed navigating 70-foot long canal boats between downtown York and the Susquehanna River.

Part eight explores the July 4, 1832 opening of the initial phase of the Codorus Navigation Works to Barnitz’s Spring. I use the Canal Towage Company photo in my presentation, to provide a visualization of the appearance of slackwater navigation, as opposed to canal operation. Codorus Navigation utilized both slackwater and traditional canal operation.

Click on this LINK for a yorkblog.com Full View of the two original photos/illustrations in this post if details are cut off in the cropping of images, or if they have been removed from the ydr.com site.

The 1830 to 1836 diary of Dr. Alexander Small records the celebration associated with the opening of the initial phase of the Codorus Navigation Works on July 4, 1832: “July—4. The canal was opened for the first time between York and Barnitz’s Spring. About five hundred persons went from this place [York] on the two canal boats [company boat “Codorus” and private boat “Pioneer”] to the spring, where dinner was provided for them by Mr. Hantz. The Orphean society performed in a handsome manned on board of the company’s boat.”

Additional details are provided following an index to the first seven parts of this series.

Newspaper articles indicate Barnitz’s Spring is 3-miles north of the Borough of York. Which is 0.4-miles south of Myers Dam; written about in Part 7 of this series. The location of Barnitz’s Spring would thus be either in Manchester Township south of the present Emig Road or in Springettsbury Township, south of the present Mundis Mill Road; in 1832 that area being Spring Garden Township on the east side of the creek. The exact location of Barnitz’s Spring has always been a mystery to those who have previously written about the Codorus Navigation Company; as it is to me, although I still have some ideas for further research.

The 500 attending the July 4, 1832 celebration to Barnitz’s Spring would have traveled through Locks 1 & 2 at Loucks Mill and Lock 3 at Small’s Dam. This must have been a feature that continued to draw the curious to either pay 25-cents or hire a boat for private excursions to Barnitz’s Spring the remainder of the summer; as advertised in the following 1832 ad: 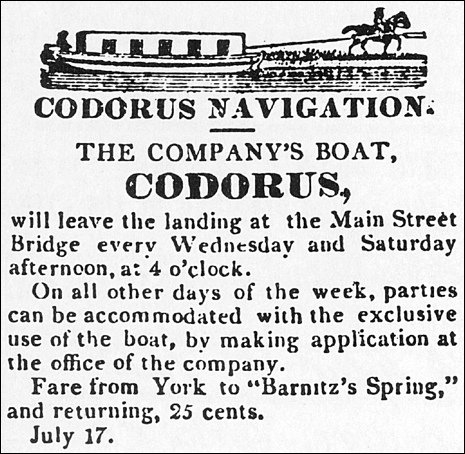