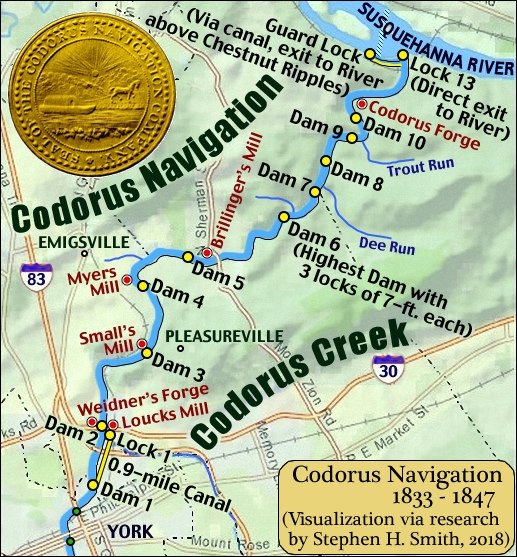 Part ten features an illustration highlighting the location of the principle features of the Codorus Navigation Works, along the Codorus Creek, between York and the Susquehanna River.

I began with a relief map of the applicable section of York County, Pennsylvania; which contained a few of the modern roads, for orientation purposes. As was learned in the earlier posts in this series, the location of existing mills and forges, prior to constructing the navigation works, figured prominently in the placement of the navigation locks from York through Dam 5 at Brillinger’s Mill.

Recall in part 2 of this series, canal engineer Simeon Guilford’s design for the lower half of the Codorus Navigation Works was quoted in the newspapers of late 1829, as: “In the Narrows, between Brillinger’s mill and Codorus forge, four dams will have to be erected—The first of these will be twenty-one feet high, requiring three locks of seven feet each to overcome a fall. The next three dams will overcome a fall of thirty-six feet, six inches. The forge dam will not be raised, and to pass it, the construction of crib work, on the north side of the stream and within it, is recommended. At the outlet a canal will be required along the shore of the Susquehanna to the still water above Chestnut ripples, at the mouth of the Codorus.”

Details and placement of Dams 6 through 9, and Forge Dam 10, on the illustration, will be explained as I explore them individually during the next several posts in this series. The “Seal of the Codorus Navigation Company” comes from an impression in the collections of the York County History Center; over which gold shading has been added.

Click on this LINK for a yorkblog.com Full View of the original illustration in this post if details are cut off in the cropping of the illustration, or if it has been removed from the ydr.com site.

The links and index to the first nine parts of this series follow: