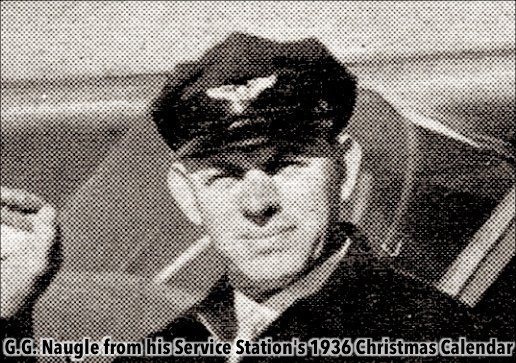 Naugle’s Service Station in Stony Brook had perhaps the widest range of services and the most unique promotional giveaway of any garage on the Lincoln Highway.

Girardus G. Naugle opened a Service Station along the Lincoln Highway in York County during 1928. It grew rapidly to offer a host of services and quickly took the name “Highway Bridge Service Station.” Named for the humpback bridge, near his business, which elevated the roadway over the railroad tracks at the east end of Stony Brook in Springettsbury Township.

Naugle’s circa 1935 business card notes he not only provides gasoline and oil for your automobile, he also had tourist cabins, a lunch room, did machine designing, sold radios, and was a sales and service dealer for Taylor Cub airplanes. Definitely not your usual service station on the Lincoln Highway!

In 1889, Girardus Granville Naugle was born in Schuylkill County, PA. During 1908, he was married at Reading, Berks County. Girardus and Helen Naugle moved to York County a year later, after G. G. Naugle got a job with the Pullman Automobile Works. He became a motor mechanic at Pullman and worked there about five years, after which he became a machinist at American Chain & Cable Company.

In 1928, Girardus struck out on his own, opening the Service Station. In 1932, he became one of the early purchasers of the E2 Taylor Cub. That airplane was manufactured in Bradford, PA, and Girardus became a sales and service location for Taylor Cub aircraft in 1934; utilizing the grass field next to his Service Station as his flying field. In the 1936 photo, G.G. Naugle stands in front of his E2 Taylor Cub airplane.

Starting in 1934 an ongoing promotion of G. G. Naugle involved him issuing cards to Service Station customers. When his punches on the cards reached $15 of sales, Naugle would offer the customer a free airplane ride in his E2 Taylor Cub airplane, or the customer could opt for discounts on other services. Note that, back then, gasoline only cost 19-cents per gallon.

By the end of 1936, 203 customers had received their first airplane ride via this promotion. On the G G. Naugle Service Station’s December 1936 Christmas Calendar the names of those 203 customers are listed. That list is provided at the end of this post. Let me know if your parents or grandparents are included on that list.

Naugle owned and operated the Highway Bridge Service Station for ten years; until May 1, 1938, when he leased the Service Station part to Ira Newcomer, who continued to sell Richfield gasoline products. Naugle maintained the machine shop and aircraft hanger, which were separate buildings. He developed several innovations utilized in auto racing; then did sub-contract machining during WWII. In the 1940 Census he lists his occupation as Engineer.

Following WWII, Naugle sells the Service Station property. The lunchroom part of the business operated the longest at 3852 East Market Street. About 20-years-ago, it was known as Mom’s Diner; that and the other buildings are now utilized for storage.

Each time I present my talk “Earliest Aviation in York County,” people provide me with additional stories related to Naugle’s airplane ride promotion. Likewise stories were received in several e-mails, as a result of the post Gas station giveaways from airplane rides to lunar landers. The following story, from Nell Morris, is my favorite:

“Great aunt Grace Wambaugh was the daughter of Ben and Blanche Wambaugh, of York Township. Grace, then a teenager, learned about the Naugle promotion and asked her father to buy his gas there, so he could give the free airplane flight to her. Grace’s future husband Harry Newcomer, of Hellam Township, also earned the right to a free airplane flight. By coincidence, the flights took place the same day; in 1935. The first time they met, was as Grace was exiting the airplane and Harry was entering it for his first airplane flight. They started dating soon afterwards.”

Doing a little family history research, I learned Grace Elizabeth Wambaugh was 18 or 19-years old, when she received her first airplane ride in 1935. Grace was born July 20, 1917, she married Harry Newcomer of Hellam Township, and passed away August 21, 2002; at the age of 85. Her husband, Harry Ephriam William Newcomer was born September 12, 1913.

The Wambaugh/Newcomer family history dates show why it is doubtful any of the recipients of the free airplane rides are still living; per the December 1936 Christmas Calendar list. I still would like to continue to hear passed down stories of their flights; look over the 203 names from that G. G. Naugle Service Station calendar, where he notes:

“This remembrance is dedicated to our many friends and especially those listed herewith for their confidence and privilege in having personally given them their first airplane ride experience.”

Links to selected related posts include: