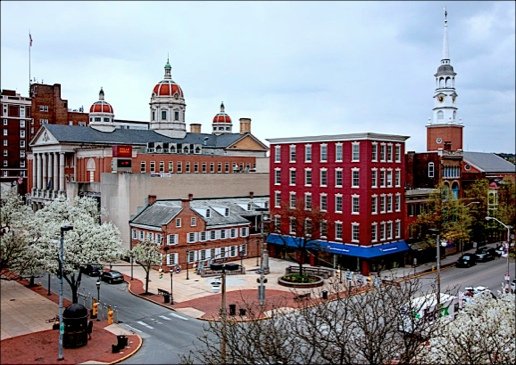 This is a recent early spring view looking down on Center Square in York, Pennsylvania. Is it spelled Center or Centre Square, and when was the name Continental Square adopted?

In colonial times, a Court House and market sheds occupied the square in York Town. As a result, in the early 1800s, the occasional use of Court House Square, Market Square and Centre Square is used in newspapers. One, or more, of these names possibly was utilized when the Continental Congress met in that Court House from September 30, 1777 until June 27, 1778.

By the time of the Civil War, Centre Square is the dominant name utilized in newspapers. Following that war, the Center Square spelling starts to appear on a very limited basis. In 1892 the initial suggestion to name the Square in York, as Continental Square, appeared on the front page of The York Daily.

Quoting the entire front page “CONTINENTAL SQUARE – A Suggestion” article in The York Daily of April 16, 1892:

“In a recent speech full of the glow of patriotic fervor and historical reminiscence Col. J. A. Stahle lamented the non-commemoration of the scenes and events that transpired in our city in the ‘days that tried men’s souls’. He suggested that Center Square should have been called Continental Square, thus perpetuating in its title the sitting of the Continental Congress. He also lamented the removal of the old court house in which the sittings were held. Now what is to hinder the adoption of this most appropriate suggestion? Why not erect a monument therein which shall be a facsimile of the old court house? Why should not the carved stone faces of some of those ancient heroes look out of its niches upon the free and happy people for whom they wrought? Why should not our children and youth have the inspiration of such association? Nay, why should not our city present to the world the attractions of such historic reminiscences and of such an appropriate and enduring Memorial?”

That article started a short discussion in newspapers, with most against changing the name of the square. However that discussion raised the question, why do we spell Center with an ‘re’ on the end?

In using Newspapers.com to search York County newspapers by year, the number of matches can be used to determine the percent utilization of ‘Centre Square’, ‘Center Square’ and ‘Continental Square’ by year. The results are shown in the following graph:

This graph also reveals, the shift from the Centre spelling to the Center spelling begins about 1895; with that change accelerating until each spelling was being used one-half the time in 1913. The 1925 introduction of the Continental Square naming rapidly eliminated the Centre Square spelling.

The Continental Square name was never completely adopted. It was only used about 60% of the time between 1925 and 1941; with Center Square primarily utilized the rest of the time.

Since 1941, the Center Square naming has been dominant; gradually increasing to over 80% utilization, at the expense of the Continental Square naming.