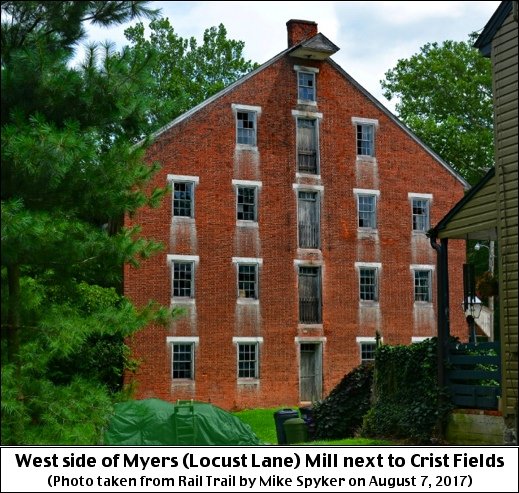 Part seven explores Myers Mill; enlarged soon after nearby Dam No. 4 was raised in conjunction with building Lock No. 4 on the Codorus Navigation Canal. This 2017 photo, submitted by Mike Spyker, shows the west side of that enlarged Myers Mill; which is presently known as Locust Lane Mill. The photo was taken from the Northern Extension of the Heritage Rail Trail County Park, located next to Crist Fields in Manchester Township.

Click on this LINK for a yorkblog.com Full View of the four original photos/illustrations in this post if details are cut off in the cropping of images, or if they have been removed from the ydr.com site.

Tax records indicate Samuel Myers initially operated a Grist Mill and Saw Mill on the property during 1799. Myers Mill is indicated, at this Codorus Creek site, on William Wagner’s 1821 Map of York & Adams Counties. After the mill was enlarged, a flagstone was placed, near the top of rise under a stone lintel, containing the wording: “Built by Samuel Myers 1841.” Details about the nearby Dam No. 4 and Lock No. 4, completed in 1833 for the Codorus Navigation Company, are provided following an index to the first six parts of this series.

Grant Voaden is the premier York County mill researcher. Voaden, an engineer at S. Morgan Smith Company by day, spent nearly 40 years of his spare time conducting detailed mill research, on approximately 360 mills, via historical document exploration, interviews, and site visits; all done while many of the mills were still operating. Grant Voaden’s mill files and his mill photograph collection were donated to the York County History Center in 1981.

Grant Voaden’s 6/23/74 summary sheet for Myers Mill, within GV-48 File at York County History Center, indicates this mill operated on a 7-foot head of water. Sanborn Fire Insurance Maps show the relative location of the head race and the tail race for the mill.

The following illustration is a visualization of the location of Dam No. 4 and Lock No. 4 with respect to Myers Mill. This visualization is via my assessment of the whole of my research, which included historic aerial photos; such as the attached 1937 aerial photo, covering the same area as my 1833 illustration. 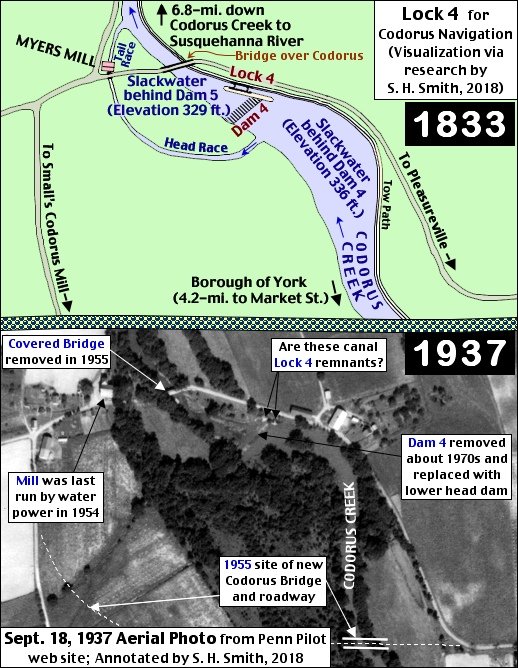 Lock 4, in the 1833 illustration, is required to lower, or raise, a canal boat 7-feet height; i.e. 336-feet minus 329-feet; the elevations of the slackwater pools on either side of the lock. Lock 4 is located 4.2-miles, via the Codorus Creek, from the West Market Street landing of the Codorus Navigation Company, and located 6.8-miles from the Susquehanna River.

The Sanborn Fire Insurance Map of 1894 indicates the name of the roadway next to the south side of Myers Mill and continuing across the adjacent Covered Bridge over the Codorus Creek was known as Pleasureville Road. That Covered Bridge stood until 1955, when it was replaced by a new Codorus Creek bridge crossing, made further south; using a modern I-Beam Bridge. That new bridge separated new roadway sections: Emig Road as a sweeping curve in Manchester Township and a straighter Mundis Mill Road in Springettsbury Township. Here is a link to the Story of that Last Covered Bridge in Springettsbury Township.

To show the 1955 newly constructed Emig Rd. and Mundis Mill Rd. roadways better, here is a 2015 Google birds eye aerial photo showing the same area as the previous illustrations. I’ve annotated where the Northern Extension of the York Heritage Rail Trail is located next to Crist Fields in Manchester Township. There are two parking lots at that location for those wishing to walk the rail trail either further north to Rudy Park, or southward towards Route 30.

The Mundis Mill Road naming, going to Myers Mill, often puzzles people; since most remember Mundis Mill as being located where North Sherman Street crosses the Codorus Creek. The explanation: Mundis Mill, on North Sherman Street, had a massive fire in the Fall of 1953. To get back into business quickly, on December 30, 1953, Roy V. Mundis purchased Myers Mill and that mill became Mundis Mill; which was that mill’s name when the nearby new roadway sections were constructed and named in 1955.

The original 7-foot high Dam No. 4, near Myers/Mundis Mill, remained in place until the 1970s. An October 8, 1967 Sunday News article reported on possibly razing the old Myers Mill dam on the Codorus Creek. At that time one of the principal objections to demolition came from the firemen of both Springettsbury and Manchester Townships, who use it as a source of water in fighting fires in the area. The 7-foot dam was eventually removed in the 1970s, however a much lower head, about 1.5-foot, dam was constructed at the same spot. The following is Mike Spyker’s photo of that present lower head dam. 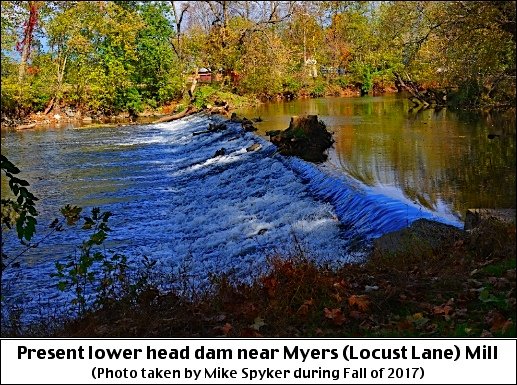