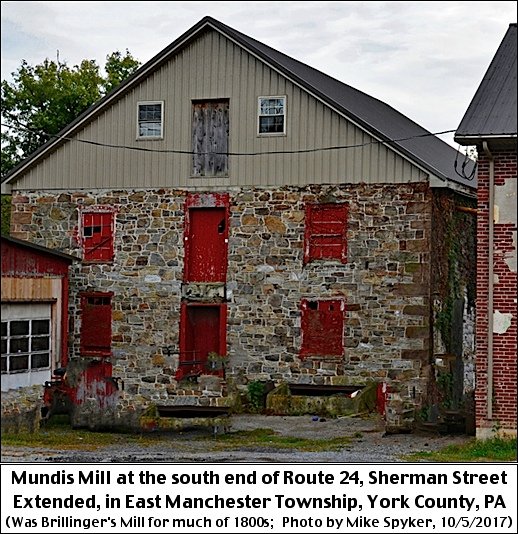 Part nine explores Mundis Mill; located at the midpoint of the Codorus Navigation Works. Canal Lock 5 was constructed at the dam utilized by this grist mill; then known as Brillinger’s Mill.

This 2017 photo, submitted by Mike Spyker, shows Mundis Mill at the south end of Route 24, Sherman Street Extended, in East Manchester Township. With the roof failing and attic walls crumbling, a modern roof and attic section was added several years ago to protect the original, greater than 250-year old, stonework structure below; i.e. three full floors plus basement. The ground elevation drops off to the back of the building, allowing outside windows on the lower floor and below that floor there are openings in the basement walls which allow water flow to and from water turbines via head and tail races, respectively. A 1945 photo showing the back of the mill and warehouse appears later in this post.

Click on this LINK for a yorkblog.com Full View of the four original photos/illustrations in this post if details are cut off in the cropping of images, or if they have been removed from the ydr.com site.

Within that yorkblog.com site, the York Daily Record is presently experiencing gremlins which result in messages such as, “Error. Page cannot be displayed. Please contact your service provider for more details.” While the York Daily Record works on correcting this problem, simply close that window; the linked blog page, within yorkblog.com, that you were intending to reach should appear.

Most people refer to this grist mill as Mundis Mill; because Mundis family members were the owners for the longest recent stretch of time. In 1920, William F. Mundis purchased from the Samuel Rudy estate: a tract of 29-acres with a 2-story house, bank barn, grist mill, saw mill, mill races, and mill dam. Following the 1938 death of William Mundis, his son Roy V. Mundis operated the mill for many decades. Roy was followed by John and Barney Mundis. It was during the Mundis ownership that the road paralleling the Mundis Mill head race was named Mundis Race Road; as it is today.

Beach Nichols 1876 Atlas of York County annotates the road leading from the York and Wrightsville Turnpike (i.e. the present East Market Street, Route 462) to Brillinger’s Mill as Brillinger Road. In terms of present road names, much of Brillinger Road was renamed Mt. Zion Road, except for the stretch renamed North Sherman Street closer to Codorus Creek.

Additional details about Brillinger’s/Mundis Mill and canal Lock 5 are provided following an index to the first eight parts of this series.

The following illustration is a visualization of the location of Codorus Navigation Works Dam No. 5 and Lock No. 5 with respect to Brillinger’s Mill. This visualization is via my assessment of the whole of my research, which included historic aerial photos; such as the attached 1937 aerial photo, covering the same area as my 1833 illustration. 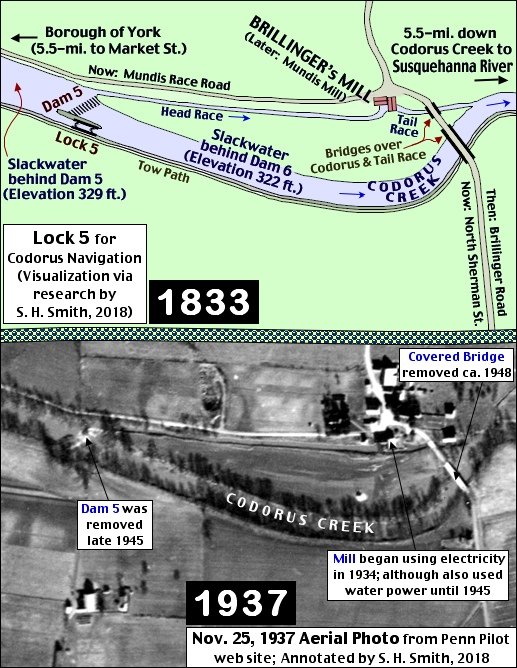 The 7-foot high Dam No. 5, near Brillinger’s/Mundis Mill, remained in place until it was removed late in 1945. The Mill began using electricity in 1934; although also used water turbines to power operations until 1945.

These two old photos show the front (north side) and back side of Mundis Mill. Even though tough to identify in this smaller size, the people in the 1936 photo were recorded, from left to right are: William F. Mundis; Paul Rentzel, Manchester; Lloyd Heiges, Hallam; Boyd S. Mundis, Dover; Harold Prowell, York; John Mundis, Mt. Wolf; and Roy V. Mundis. 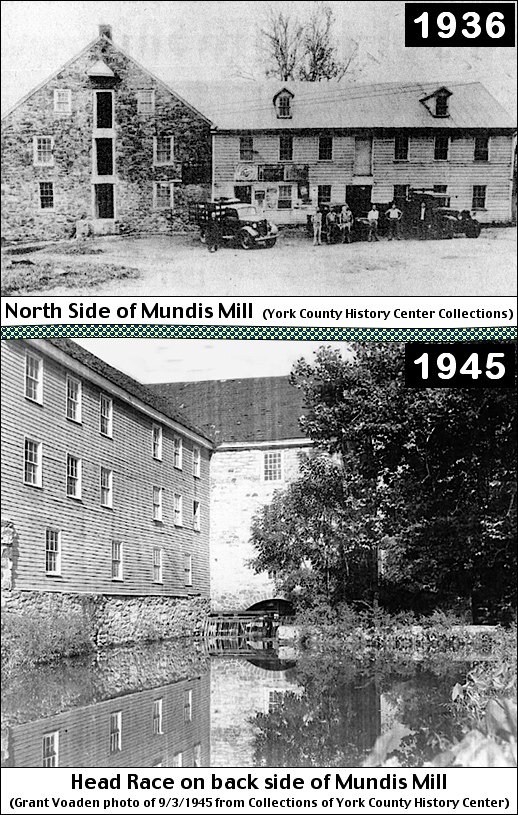 The lower 1945 photo is a view overlooking the end of the head race, next to the back side of Mundis Mill. This photo, dated September 3, 1945, is from the collections of Grant Voaden; which he donated to the York County History Center. Since the ground elevation drops off sharply from the front of buildings to the back side, the three full floors of the stone mill (on the right) and frame warehouse (on the left) can be seen in this photo. Below the lowest floor in the mill, the semicircular opening in the basement wall is where water flows from the head race into water turbines to power the mill. 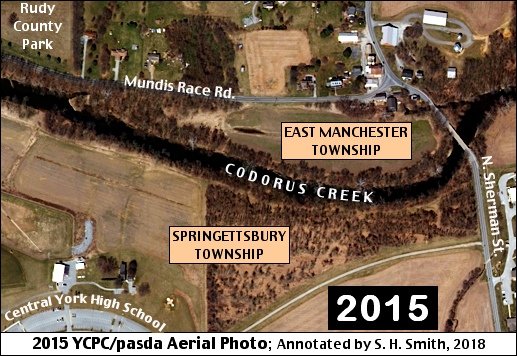 I commend reader Kay Patterson for making an astute observation. She remembered seeing an article that claimed John Elgar’s steamboat Codorus utilized Codorus Navigation to travel from York to the Susquehanna River, however now realizes that was not possible. Kay commented the author of that article definitely confused the canal boat named Codorus (mentioned in Part 8 of this series) with the earlier (launched in 1825) steamboat also named Codorus. See my first link in the following related posts; the steamboat Codorus was operating as a ferry on North Carolina waterways in 1829; before construction ever started on the Codorus Navigation Works.