During a June weekend in 1914, a Wright Brothers Model B Flyer took off repeatedly from Hilton Field carrying York County’s first airplane passengers; one at a time. The flights were at a newly constructed airfield, on property of George F. Motter, in rural Dover Township. George F. Motter shared a dozen photographs of the activities from that 1914 weekend, at Hilton Field, with The Gazette and Daily in 1935.

There are several generations sharing the George F. Motter name, so I did a little family history research to make sure I was dealing with the correct generation. This illustration of the Motter Company founding generation George F. Motter I [1838-1906] and his son George F. Motter II [1872-1935] is arranged from their photos on a Xerox copy of the Jan-Feb 1948 Issue of The Motter Messenger in Collections of the York County History Center. It is George F. Motter II on whose property the 1914 flights took place and it is the same individual who shared photos of those flights with The Gazette and Daily in 1935, eight months before he died.

George F. Motter and the 1914 flights at Hilton Field

George F. Motter II married Margaret R. Strauss on November 20, 1895, in the bride’s hometown of Wilmington, North Carolina. They had four children: William, Edward, Margaret and George. In 1910, this family purchased property along the Dover Trolley Line near Hilton Station; it became their summer home, which they named “Bonne View.” I’ve drawn an arrow, pointing to “Bonne View” on this 1920 USGS Topographic Map section. Further details about this composite map are in the post: Location of Hilton Airfield along Dover Trolley Line. 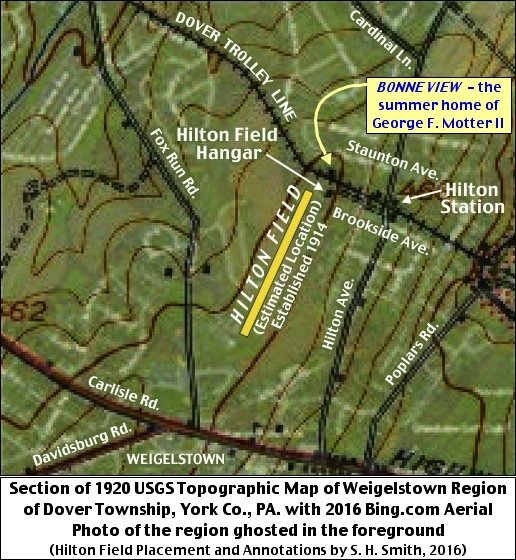 The Wright Brothers manufactured about 100 of their Model B Flyers between 1910 and 1914. It was their first passenger-carrying airplane; capable of carrying one passenger, nestled side-by-side, between the motor and the pilot.

One of the early aviators to fly the Model B Flyers was Eugene Heth. Born in 1879, Heth’s first solo flight was in 1911; at the age of 32. He quickly became a skilled pilot and during WWI he served as a civilian flight instructor. Heth was known for his daredevil stunts and had several close calls, however unlike many early barnstorming aviators, he lived to a nice old age of 80-years-old.

The flights by Eugene Heth, in June 1914, at Hilton Field, along the Dover Trolley Line, were done while employed by Berger Aviation Company of Chicago, Illinois. David Steigerwald submitted to the family history research site Find-A-Grave, the following 1914 season promotional photo of Eugene Heth with the Wright Flyer. This was the aeroplane that several Yorker’s had the chance to experience flight as a passenger, with Eugene Heth, during June of 1914. 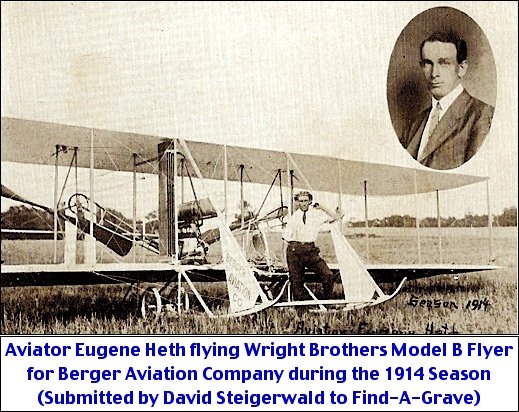 In 1935, The Gazette and Daily asked for memories of the airplanes at Hilton Field. Quoting from the February 9, 1935 issue, containing reader feedback:

Several days ago a reader asked us when airplanes landed at Hilton. We didn’t know so we appealed to other readers to supply us with the information. And did they respond? They did!

A plane landed on a plot of ground owned by George F. Motter, on Hilton Avenue, midway between Weiglestown and Hilton, opposite the Motter summer home, on Saturday, June 20, 1914, and gave a number of York countians their first thrills in the air, on that and the following day.

Emory V. Bupp, proprietor of a seed store on North George Street, was one of the many Yorkers to inspect the plane. He has a newspaper clipping telling of the visit to York of the early type aircraft.

Mr. Motter dropped into the office the other night with a photograph album containing a dozen snapshots of the plane, which landed on his property, and the crowds, which congregated during the plane’s two-day stay. He and Mrs. Motter were snapped in the plane while it was grounded. They didn’t trust taking a flight in the craft, which, like all early heavier-than-air machines, looked as if it might fall apart any minute.

In addition to presenting an interesting study of the early type airplane, the pictures taken by the Motters also show the styles of clothing worn, and the type of automobiles used twenty-one years ago.

I did not have success in discovering any of the Motter photos, by searching the Collections of the York County History Center and reviewing old issues of The Gazette and Daily. Hopefully a reader with a box of unidentified photos, purchased at a yard sale, or a Motter descendant with the scrapbook, will make such a discovery with the photo clues provided in this post. Look for photos containing George F. Motter II or Eugene Heth or the Wright Flyer with the following “Berger Aviation Co.” markings. 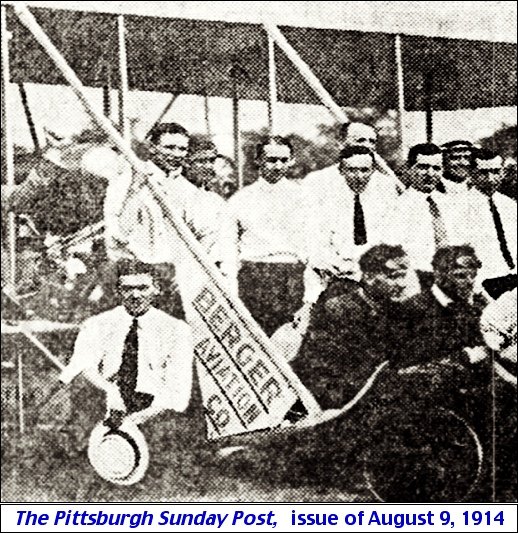 After the June 1914 flights at Hilton Field in York County, later that summer, Eugene Heth gave similar passenger rides and demonstration flight in Pittsburgh. This photo from those flights appeared in the August 9, 1914 issue of The Pittsburgh Sunday Post.