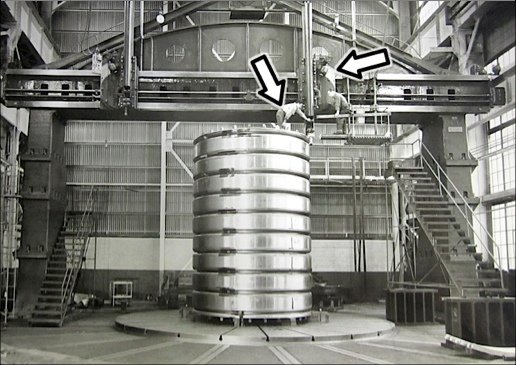 Within the collections of the York County History Center are a few photos and a much larger group of negatives of a previously unidentified product of the S. Morgan Smith Company. The introductory photo is one component of that unidentified product; it shows S. Morgan Smith Company machinists inspecting a large rotor core being finished on their 42-foot boring mill. This post provides the sources that identify the overall product as a massive axial-flow air compressor; a key component in a Supersonic Wind Tunnel, which was one of NASA’s earliest development facilities.

My Second Saturday talk last month, “Innovations of the S. Morgan Smith Company,” is now viewable at this YouTube link. Slightly after the 57-minute mark, I introduce the previously unidentified product.

The Supersonic Wind Tunnel, with the S. Morgan Smith axial-flow air compressors, opened in 1956; two years prior to the establishment of NASA. The wind tunnel was constructed at The Lewis Flight Propulsion Laboratory, in Cleveland, Ohio; which held a unique Inspection on May 22, 1956, upon the opening of the facility. The one-day event was dedicated entirely to the new Lewis Unitary Plan Tunnel—since renamed the 10- by 10-Foot Supersonic Wind Tunnel. At that time, the $33-million facility was the most powerful wind tunnel in the nation.

During the event, a May 22, 1956, Press Release by the National Advisory Committee for Aeronautics’ Lewis Flight Propulsion Laboratory provided a Fact Sheet about the Lewis Unitary Plan Wind Tunnel. Page 5 recognizes the manufacturers of the two massive axial-flow compressors: “Compressors manufactured by S. Morgan Smith Co. and erected on the site by Commercial Contracting Co. Compressor blades machined by the C. L. Gougler Machine Co. from forgings supplied by Steel Improvement and Forge Co.”

One of the photos in that Press Release shows a partly assembled Main Compressor, within the Supersonic Wind Tunnel, at Lewis Flight Propulsion Laboratory. Within the photo, to the left are the stationary stator blades; attached to the compressor outer casing, produced by the S. Morgan Smith Co. To the right is the rotor, manufactured by S. Morgan Smith Co. (the same one shown in the introductory photo), to which blades, produced by C. L. Gougler Machine Co., are attached.

Details of the two axial-flow air compressors in the Lewis Unitary Plan Wind Tunnel are described in a January 11, 1956 Lewis Flight Propulsion Laboratory technical report, published prior to the 1956 event showcasing the facility:

Compressor 1 (also known as Main Compressor) is an 8-stage axial-flow compressor, rated at a volume of 78,000 cubic feet of air per second at a pressure ratio of 2.8. It contains 1006 stainless steel blades ranging from 1.8 to 3.25 ft. long. Inlet diameter is 20 ft. It has 150,000 horsepower available to drive it, furnished by four wound rotor induction motors. Total rotating length, including motors and compressor is 183 ft. and total weight is 445 tons.

Compressor 2 (also known as Secondary Compressor) is a 10-stage axial-flow compressor, rated at a volume of 37,500 cubic feet of air per second at a pressure ratio of 2.4. It contains 1395 stainless steel blades ranging from 1.05 to 1.55 ft. long. Inlet diameter is 15 ft. It has 100,000 horsepower available to drive it, furnished by three wound rotor induction motors. Total rotating length, including motors and compressor is 147 ft. and total weight is 340 tons.

The involvement by S. Morgan Smith Company in Wind Tunnel Work began during World War II. In August 1944, NACA, the National Advisory Committee for Aeronautics, issued a study on the theory behind the type of axial-flow compressor needed to power a high-speed wind tunnel for conducting advanced aeronautical research. It turned out to be a very large compressor; a machine seemingly impossible to go ahead with.

However in 1945, as a result of the Naval Aviation Catapult manufacturing, the NACA discovered the S. Morgan Smith Company had the very large manufacturing machinery to construct such a compressor, and they learned of the company’s engineering know-how via the wind-turbine project; so the S. Morgan Smith Company was given the task of creating the drawings, such that the large axial flow compressor could be produced. The drawings were completed and the compressor was ready to be assembled when Japan surrendered; and the project was canceled. That axial-flow air compressor was moth-balled for several years; however was eventually used to drive the air through a sub-sonic wind tunnel.

However in 1952, the NACA got the go-ahead to build an even higher speed, that is a supersonic, wind tunnel at the Lewis Flight Propulsion Laboratory in Cleveland. The initial axial-flow compressor designed by S. Morgan Smith Company was scaled up to produce the desired airflow. That Main axial-flow compressor was capable of generating Mach 2.5 airflow in the test section; that is two and one-half times the speed of sound or about 2,000 miles per hour.

A Secondary axial-flow compressor could also be engaged to boost the airflow to Mach 3.5 in the Supersonic Wind Tunnel. It appears this compressor required less of a change, as compared to the design developed during WWII; since it was constructed first—that conclusion is based upon the following details in a 1954 S. Morgan Smith publication:

Within the 1954 S. Morgan Smith Company publication “Engineering the Unusual in Hydrodynamics” (Manuscript File 31711.005 at the York County History Center) is the following photo of the Secondary axial-flow compressor during initial assembly at the job site.

Quoting the full caption, word for word, from the publication: “For the National Advisory Committee for Aeronautics, we have designed and built several of the world’s largest axial flow compressors. This 2,250,000 cfm machine is now being used in a supersonic wind tunnel to test jet aircraft engines. Three electric motors totaling 89,000 horsepower are used to drive the compressor at a maximum speed of 900 rpm. Even larger compressors of our design, capable of developing inlet volumes of 4,300,000 cfm with a 150,000 horsepower drive have recently been manufactured in our shops.” That even larger design is the Main Compressor in the Supersonic Wind Tunnel; i.e. 4,300,000 cubic feet per minute equals 71,667 cubic feet per second. With the NACA reporting 78,000 cubic feet per second in 1956; test results of that scaled up design overachieved the target airflow.

Within the 1954 S. Morgan Smith Company publication “Engineering the Unusual in Hydrodynamics,” on the same page as the above photo, is the print of the 31711-264P photo in the Collection of the York County History Center.

Quoting the full caption, word for word, from the publication: “The 10-stage rotor, on our 42-ft. vertical boring mill ready for facing shaft connections for parallelism, weights about 150 tons. The individual rotor discs were completely machined from steel forgings. Spacer rings were fabricated from alloy steel and welds were radiographically inspected. When completed, parallelism and runout of the entire assembly was accurate to one-thousandth of an inch.”

In the following photo, a 40-inch diameter drive shaft is connected to the fully assembled 8-stage Main Compressor. To the right side, out of the picture, are the 150,000 HP drive motors.

Fully operational in 1956, the Supersonic Wind Tunnel would be used by both the military and private industry for stability tests of airplanes and rockets in supersonic flight. On October first, 1958, NACA was dissolved and its assets, facilities and personnel were transferred to the newly created National Aeronautics and Space Administration — NASA.

The NASA Lewis Research Center test facilities refocused efforts almost completely on the space program. Less than 10 percent of their annual budget was dedicated to aeronautics. Therefore, S. Morgan Smith Company had a hand in creating an early heavily utilized test facility for NASA. The Supersonic Wind Tunnel facility still operates to this day, within what is now known as the NASA John H. Glenn Research Center at Lewis Field.