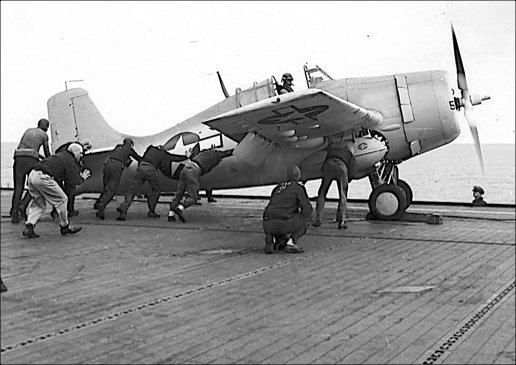 During the research for my May 8th Second Saturday Lecture “Innovations of the S. Morgan Smith Company,” at the York County History Center, more of Smith’s not-well-known manufactured products were discovered.

I place the aircraft carrier catapults in the category: known manufactured product; however with few details. It is generally reported that S. Morgan Smith Company was a prime contractor for manufacturing hydraulic-pneumatic catapults for launching Navy planes from the decks of aircraft carriers during World War 2. I discovered details about those catapults for the lecture, and was pleasantly surprised that search revealed two additional not-well-known manufactured products; those will also be covered in the Second Saturday lecture.

In the initial search for catapult details I asked around and got the general comment, “I’ve never seen aircraft carrier catapults used in any World War 2 movies.” Neither had I; all the more reason to track down the details.

The hydraulic-pneumatic catapults used compressed air as the power medium and fluid as the power-transmitting agent. The fluid was a water base, nonflammable liquid developed for the application. The catapult model, manufactured by the S. Morgan Smith Company, was capable of reliably launching 9,500-pound airplanes in 73-feet to a speed of 61 knots.

This neat 25-minute YouTube video shows above deck and below deck tasks for catapulting airplanes off a U.S. Navy Aircraft Carrier in 1944. The below deck scenes show the complexity of the hydraulic-pneumatic catapults manufactured by the S. Morgan Smith Company. One should note, steam catapults, the type still in use, were not introduced until 1954.

A news article about that award, in The York Dispatch of August 21, 1944, provided excellent background as I began my search for further information on the Aircraft Carrier Catapults produced by the S. Morgan Smith Company during World War 2. Quoting that article with three headlines: “Navy Captain Lauds Work of Smith Plant,” “E Pennant Presented to Industry Manufacturing Plane Catapults,” and “Dinner at Valencia.”

“Here is your flag. Keep it flying,” said Captain Calvin Mathews Bolster, head of the ship installation section, Bureau of Aeronautics U.S.N., in closing a presentation of the ‘E’ pennant to the management and employees of the S. Morgan Smith company Saturday afternoon.

“I must admit that I feel a great personal gratification in the fact that you have won this award,” he remarked at the opening of his address, “since I have been in such intimate touch with the progress of the catapult work here from its inception.” He then dwelt on the problems involved and cited the doubt that existed in the minds of many, “That these highly complicated mechanisms could be successfully constructed by private manufacturing concerns.” This feeling was due chiefly to previous production being in government establishments, and as a result of “techniques developed over a period of years, concurrently with the development of the equipment itself and since only one shop had done all of the manufacturing, drawings did not reflect the actual tolerances, finishes, and shop practices used.”

“Captain Bolster gave an interesting description of the catapult. It is a “very ancient weapon, having been used for hurling missiles at the enemy as early as 299 B.C., but its use for launching carrier aircraft is not very old.” Next, he emphasized the importance of the device, why it had to be fool-proof and said that its failure would result in loss of life and planes. Speaking from experience, he added. “I can assure you that nothing is more important to the man sitting in the airplane waiting for the signal ‘fire’ than the knowledge that the mechanism that will hurl him into space is of sound, rugged and dependable construction.”

The performance of the Smith organization was both noteworthy and unique, Captain Bolster pointed out, because “you have not only ‘made something according to a drawing,’ but have, in fact, been manufacturing vital mechanisms which have become potent parts of the carriers,” and besides meeting our scheduled needs with these fine catapults, another feature of this award deserves attention and that is your excellent record of attendance, which reveals the basic spirit.”

“However, even though the products of your labors are still ‘kept under cover’,” Captain Bolster continued, “I assure you that these catapults are a vital part of our naval aviation and that they have dealt continuous and telling blows to our enemies in all areas of this global war. Many German submarines on the bottom of the Atlantic, and many dead Japs from the Aleutians to the South Pacific owe their fate to planes catapulted from carriers by the mechanisms built here in York.”

Captain Bolster introduced Captain Walter F. Rodes, U.S.N., who has served at Midway and other points in the Pacific area, who gave first-hand accounts of his experiences and those of other naval airmen, with the Smith catapults in their contacts with the Japs.”

Those were the presentation remarks, in addressing 1,000 employees and friends of the S. Morgan Smith Company, during the “E” Award Ceremonies on Saturday August 19, 1944; at the Smith plant in the west end of York. A reception and buffet dinner at the Valencia Ballroom followed the ceremonies.

The following photo shows a typical escort aircraft carrier. This is USS Card (CVE-11); one of 45 Bogue-class escort carriers for the U.S. Navy during World War 2.

Quoting a Western Union telegram, in which Rear Admiral Ramsay passed along a comment from the USS Card operating in the North Atlantic, to “The Men and Women of S. Morgan Smith Co.”

“Our catapult equipment is plenty OK, regardless of how the ship pitched, it got us into the air safely. This enthusiastic approval of equipment, which you assembled, comes from one of the air squadrons of the ‘USS Card’, the ‘baby flat-top’, which together with her escort ships was recently awarded a Presidential Unit Citation for sinking more enemy submarines than any similar group in naval history. A total of 1417 launchings were made from the ‘Cards’ catapult without a major repair. This is high tribute to the workmanship of every man and women helping to provide this vital equipment for the Navy. Keep your good work up and keep em launching.” Signed D. C. Ramsay, Rear Admiral USN.

Links to posts about other S. Morgan Smith products: