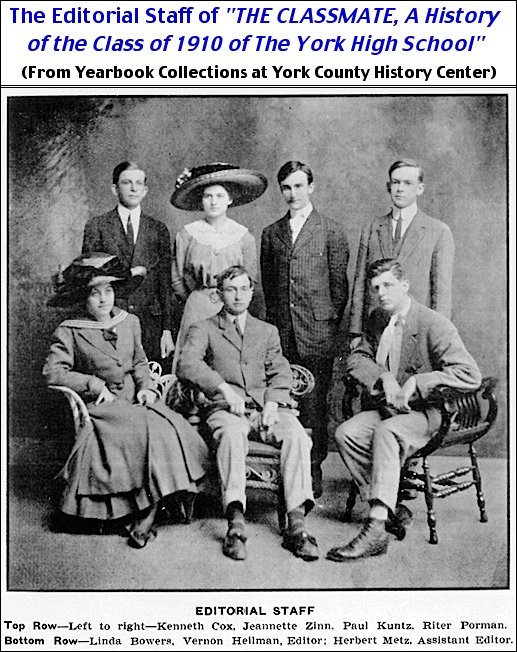 The casket containing the body of Jeannette Zinn was flag covered for her funeral and burial in York; ten-weeks after she died overseas while on route for duty with the American Expeditionary Forces in Europe during World War I. Newspapers reported she was to be engaged in Y.M.C.A. war work, although suspicions remain that more was involved.

This post contains more about Jeannette Zinn; from her involvement with her class Yearbook at York High to military type training she received during 1918. Jeannette stands in the photo of the editorial staff, which appeared in “THE CLASSMATE, A History of the Class of 1910 of The York High School.” Seated, left to right, are: Linda Bowers, Vernon Heilman, Editor; and Herbert Metz, Assistant Editor. Standing are: Kenneth Cox, Jeannette Zinn, Paul Kuntz and Riter Porman.

Click on this LINK for a yorkblog.com Full View of the photo in this post if details are cut off in cropping, or if it has been removed from the ydr.com site.

The 1910 York High class history was published locally. It is the forerunner of todays Yearbooks, except with drastically fewer pictures. For example, individual photos of the 81-members of the senior class were not published in the 1910 class history; instead there was one group photo, of the whole class, in front of the school. Besides her involvement with the class history, Jeannette Zinn was the class poet and was often involved in plays. Jeannette graduated with honors, being the valedictorian of her class.

Jeannette was employed by C. H. Bear & Company; rising to become a buyer for Bear’s department store. She also continued amateur theatrical work; having taken part in several benefit plays by the Girl’s Club of York.

When the United States became involved in World War I, Jeannette Zinn was the driving force in organizing a drill squad within of the Girl’s Club of York to expose the women to military type training. Within this drill squad, Jeannette was the leader of a group of women, known as a “battalion of death,” that took this training to another level. A reporter from The Philadelphia Inquirer witnessed this training and wrote in the issue of June 24, 1918:

“A drill squad of more than 100 members has been formed and is drilling two nights a week under direction of Sergeant Joseph J. Wall, recruiting officer for the government in this district, with headquarters in York. These girls are instructed in marching and stationary drills, in rifle practice, in sabre drills and other forms of manual features in which their brother-friends are fast becoming proficient in the various camps throughout the country. A representative of the Inquirer attended a drill of the company recently and was surprised by the proficiency the members exhibited in their work. The members are also organized for hikes, which they take on an average of once a week.”

“The members of the corps are more than anxious to take an active part in the conflict and the formation of a ‘battalion of death’ is now under way. This movement is sponsored by Miss Jeannette Zinn, treasurer of the club, and one of the most active members. She has already enrolled a number of girls. These girls are taking rifle practice and sabre drills more seriously, if possible, than the other members.”

“Aside from the training for active participation in the conflict, the club is also training in other lines. A class in French has been organized and is receiving instruction several times a week under a competent instructor for service as telephone girls with the United States forces in France. These girls are making wonderful progress, and will, within a short time, be able to take their place and do their bit over there.”

Was it this Inquirer article, of June 24, 1918, that first caught the attention of the military? There is still more to come on Jeannette Zinn, as friends continue to conduct an extensive WWI military records search on Jeannette.