This is a photo of Miller’s One-Room Schoolhouse as it stood along Heindel Road during 1941 in Springettsbury Township.  The photo was taken by Scott W. Knaub and is from the Collections of the York County Heritage Trust.  Following the 1951-1952 school year, it was one of the last five One-Room Schoolhouses that closed in Springettsbury Township.

Students received an education in this schoolhouse from about 1860 to 1952.  Through, and including the 1950-1951 school year; students, spanning eight grades, were taught in this one-room.  During the final year as a schoolhouse, it was used for students spanning grades 1 to 6.

In terms of the present surrounding landmarks, I’ve indicated the location of Miller’s Schoolhouse on the following Bing.com Aerial Photo.  I’ve crossed out Concord Road and Davies Drive, since they did not exist at present locations when Miller’s was a schoolhouse.  The yellow lines indicate the location of early roads in the area.

In 1856, a tiny 0.08-acre lot was set-aside at a “T” intersection for a school building.  This lot was distinctively in the middle of a farm lane, on the boundary between John Miller’s and John Stricker’s farms.  Today that building still stands as a private home at 3565 Heindel Road; as seen in the following photo.  It is still uniquely located, as if it was originally placed in the middle of Heindel Road. 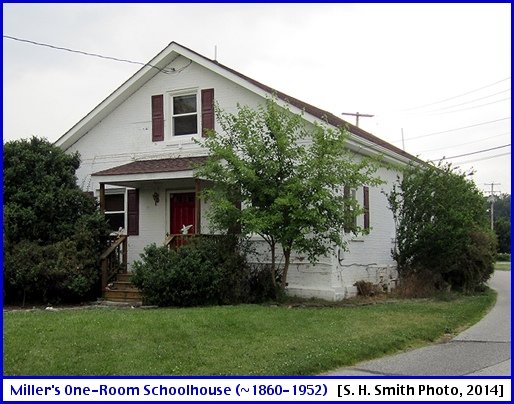 I’ve seen various years stated when this building was first utilized as a schoolhouse; among them are 1856, 1860 and 1861.  Since a schoolhouse does not appear at this location on Shearer’s 1860 Map of York County, circa 1860 is probably the best way to state the starting year for Miller’s One-Room Schoolhouse.

The building ceased being a schoolhouse on September 6, 1952, when the School District of Springettsbury Township sold the building on the 0.08-acre lot to Reginald H. Heindel and Alverta S. Heindel, his wife.  There have been a number of private owners since that time.

Look for my post on Friday for memories of Miller’s One-Room Schoolhouse and the surrounding area by a former student.  Continue reading for related posts and a compilation of the teachers that taught at Miller’s: