Cliff Satterthwaite submitted this 1963 winter scene, in front of the Menu-Ette Restaurant, along the Lincoln Highway in Springettsbury Township. Cliff’s artistry, via murals, graced the interior of this restaurant. Cliff’s elaborate decoration of the windows, for the Christmas Season, will be examined in closer detail within my post on December 24th.

Bob Sternbergh established this restaurant about in 1960 and operated it for most of the 1960s. I put together the following montage; of a postcard that Cliff Satterthwaite drew to advertise the business, along with his drawing of Bob. Click on this LINK for a Full View of the illustrations in this post; since the ydr.com site will occasionally cut off important details in the cropping of illustrations. 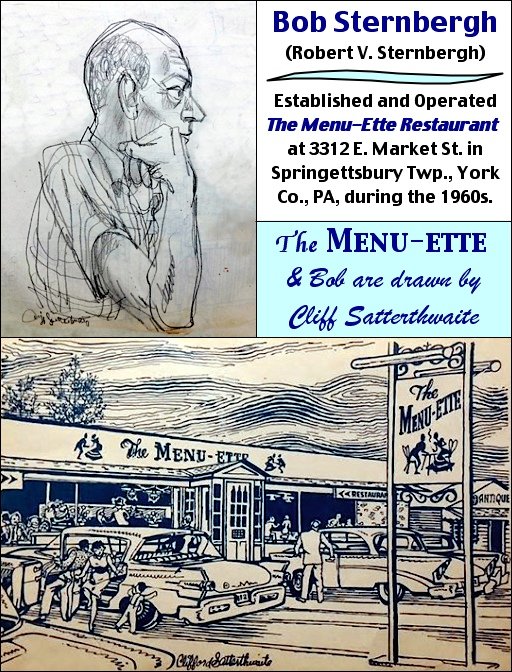 The York Diner occupied four-locations over the span of 30-years that Don Sternbergh operated the restaurant. Don assembled diner sections on a vacant lot in York during 1939 and with the help of his brother Philip Sternbergh, who served as the night manager, the diner operated 24-hours-a-day, 7-days-a-week. The diner was located at 37-39 North George Street until it was forced to move in 1949, for the want of a few more downtown parking spaces. The 37-39 address was one-half way between Philadelphia Street and Clark Avenue; therefore today the steps, front doors and lobby of the York County Judicial Center approximately occupy the same space where the diner sat.

The York Diner was physically split into three sections and trucked into Springettsbury Township during 1949. Today, the Giant Gas Station on the northwest corner of Market Street and Memory Lane occupies the second location of the York Diner.

The diner was physically trucked again, further east on Market Street, during 1960. The diner sections were assembled in an open field along Market Street, just east of a garden store called The Barn. That big barn sat about where the Home Depot building is now located. This move occurred because the realignment of Memory Lane, so that it crossed Market Street directly opposite Haines Road, resulting in the loss of much of the diner parking lot.

In 1962, McCrory’s Distribution Warehouse was constructed, in the field behind the York Diner. The warehouse needed the diner lot for parking. The diner was in poor condition to physically make another move and was demolished. A house at 2810 East Market Street, adjacent to the east side of Playland, was remodeled; allowing Don Sternbergh to continue to operate the York Diner. Within a year of the move, Don Sternbergh changed the diner name to the York Dutch Restaurant.   That fourth location is now the site of the Advance Auto Parts store on East Market Street.

For much of the time Don Sternbergh operated this restaurant at the three locations along East Market Street in Springettsbury Township, Cliff Satterthwaite provided his artistic talents to the establishment. Cliff drew the following depiction of the York Diner upon its 1962 completion at 2810 East Market Street and also submitted his drawing of Don Sternbergh. 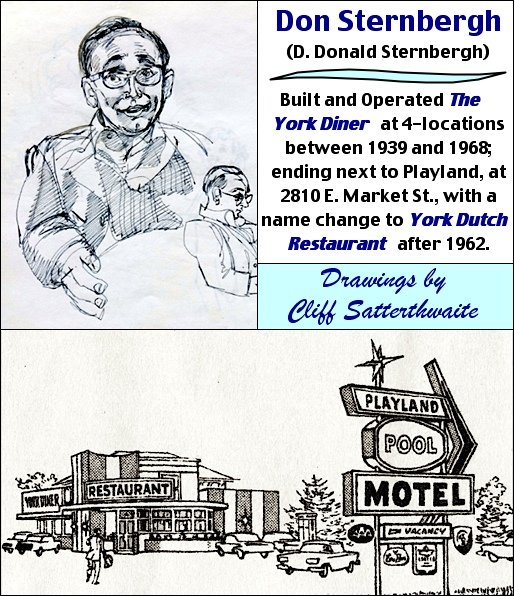 The Menu-Ette is not only linked to the York Diner, but also to Playland; again via the owners of these establishments. Bob Sternbergh and Don Sternbergh are sons of David Sternbergh, the builder and operator of the Playland Complex along the Lincoln Highway in Springettsbury Township. The following post contains a neat then-and-now view of the Playland Complex area, along with a photo of the sole surviving Playland feature:

David Sternbergh began thinking about the first piece in a Playland Complex during 1939; the same year his oldest son Don set up the York Diner in downtown York. Then 46-years-old, David attended the 1939-40 New York World’s Fair in Flushing Meadows, New York. He discovered most of the structures would be sold following the closure of the fair and put in a bid for a building he thought would house a nice roller skating rink.

After the fair closed October 31, 1940, David was successful bidder and had the building’s large wooden trusses and other useful materials shipped to York. There was an early setback in 1941, when the partly built structure collapsed in a windstorm. Most materials could be salvaged and construction continued, allowing the opening of the roller skating rink in November of 1941; three weeks before the United States entry into WWII.

All four of David Sternbergh’s sons served in the Armed Forces during WWII. His 26-year-old son Ray (Charles Raymond Sternbergh) was killed in action on April 24, 1945, when a bomb from a Japanese plane hit an ordnance building in which he was working near Manila in the Philippines. He was with the 372nd Ordnance Battalion, and had participated in many Pacific landings, including Aitape, Hollandia, Finschafen, Goudenough Island, Leyte and Lingayen.

David Sternbergh constructed the huge above-ground pool next to the Playland Roller Skating Rink as a memorial to his son Ray. The pool was opened following dedication ceremonies to Ray Sternbergh on Memorial Day 1946.

Cliff Satterthwaite provided his artistic talents to the Playland Complex. Cliff drew the following depiction of the Playland Pool Motel in 1962, shortly following the completion of the motel encircling the pool, and also submitted his drawing of David Sternbergh. 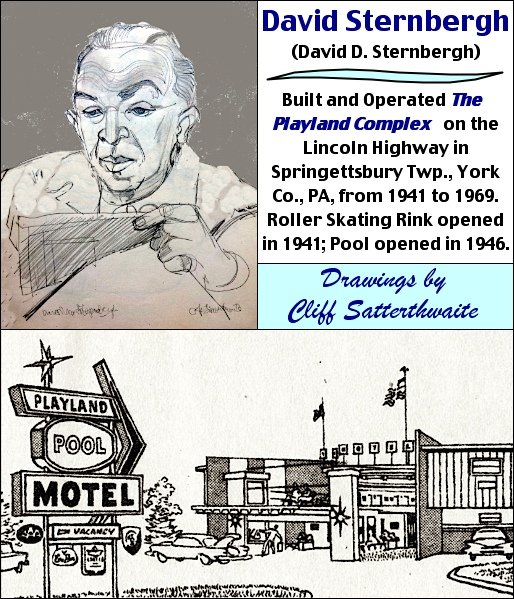 Sternbergh sold the Playland Complex in 1969. Afterwards, the Pool Motel went by several names; first Congress Inn and then Yorkview Motel. The roller skating rink was named Roll’R’Way East; until being destroyed by an enormous fire in 1985.

The Cliff Satterthwaite artwork was used with his permission.  Cliff lived in York County, PA, from the mid-1950s to the early-1980s, creating a host of artwork, with much done live on location.  He has a book available containing nearly 400 images of his artwork from that time period;  e-mail contact is  monsterart4grani@aol.com